1  What are they? How can we decide?

3 ▫ Example: Anne Frank was a teenager during World War II. She kept a diary or journal the years before she died in a concentration camp. Her diary was later published as the “Diary of Anne Frank”. This is a primary source.Diary of Anne Frank ▫ Example: Sarah Morgan was young woman during the Civil War. She wrote in her diary or journal what happened to her and her family during the war. This is a primary document because it was first hand. She wrote it at the time it happened.

4 o An autobiography is when you write a story or book about yourself. Example: Jimmy Carter was the 39 th President of the United States. He wrote an autobiography about his time as the US President.

7 ▫ Example: 2008 Presidential candidate Senator John McCain talked about his “own” experiences as a Vietnam prisoner of war. It is a primary source because he was there, experienced the events and shared it first hand. ▫ The television stations found footage of Senator McCain at the time that he was released. Those videos are also considered primary sources because it was filmed when it occurred.

8 ▫ Example 1: During the Great Depression and World War II, television had not been invented yet. The people would often sit around the radio to listen to President Roosevelt’s war messages. Those radio addresses are considered “primary sources.” ▫ Example 2: During the 2008 election Barack Obama, had many interviews that were televised. Those interviews are considered primary sources.

10 ▫ Example: A biography is when you write about another person’s life. Many people have written about President Obama.President Obama ▫ Biographies can be websites, books, or articles written during a person’s life or after they have died.

11 Primary o If the article was written at the time something happened, then it is a primary source. o Example: The articles written on NASA’s last space shuttle mission July 2011 would be a primary source.July 2011 Secondary o However, if a reporter in 2009 wrote about George Washington’s inauguration using information written by someone else (1789), that would be a secondary source.

14  Almanacs, encyclopedias, history books (textbooks), etc. are all secondary sources because they were written “after” the these events occurred 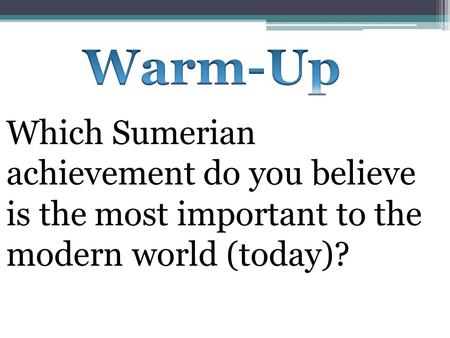 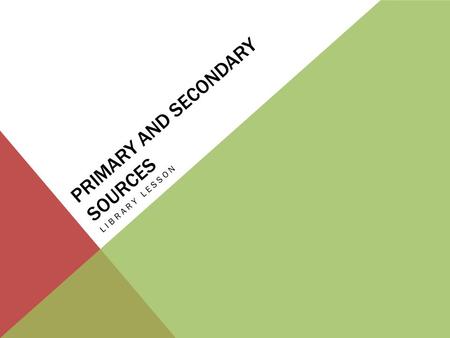 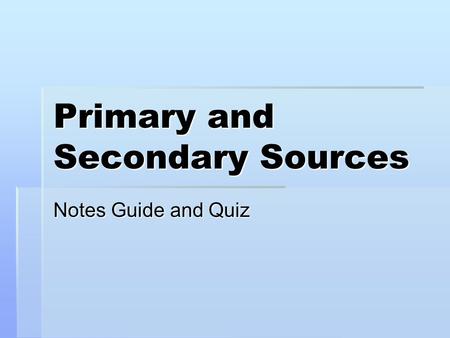