3 Examples of Primary Source Examples of Primary Source Diaries and journals ▫Example: Anne Frank was a teenager during World War II. She kept a diary or journal the years before she died in a concentration camp. Her diary was later published as the “Diary of Anne Frank”. This is a primary source.Diary of Anne Frank ▫Example: Sarah Morgan was young woman during the Civil War. She wrote in her diary or journal what happened to her and her family during the war. This is a primary document because it was first hand. She wrote it at the time it happened. ▫Sarah Morgan Dawson: A Confederate Girl's DiarySarah Morgan Dawson: A Confederate Girl's Diary

7 Examples of Primary Source Examples of Primary Source Published first-hand accounts, or stories are considered primary resources. ▫Example: 2008 Presidential candidate Senator John McCain talked about his “own” experiences as a Vietnam prisoner of war. It is a primary source because he was there, experienced the events and shared it first hand. ▫The television stations found footage of Senator McCain at the time that he was released. Those videos are also considered primary sources because it was filmed when it occurred.

11 Primary or Secondary Sources? Newspaper and Magazine articles can be a primary or secondary sources. ▫If the article was written at the time something happened, then it is a primary source. ▫Example: The articles written on Barack Obama’s inauguration in 2009 are primary sources. ▫However, if a reporter in 2009 wrote about George Washington’s inauguration using information written by someone else (1789), that would be a secondary source.

14 Examples of Secondary Sources Biography ▫Example: A biography is when you write about another person’s life. Alice Fleming wrote a biography on the life of Martin Luther King Jr. This is a secondary document. It was written about him after he died.

15 Examples of Secondary Source Think about it like this…. If I tell you something, I am the primary source. If you tell someone else what I told you, you are the secondary source. Secondary source materials can be articles in newspapers, magazines, books or articles found that evaluate or criticize someone else's original research

17 Let’s practice ___1. Diary kept by John Smith, a soldier in the Confederate Army, published in a collection of Alabama papers ___2. Photograph of George Washington Carver taken in 1898 ___3. Biography of George Washington ___4. Newspaper article about the assassination of President Kennedy written on November 23, 1963 ___5. Television mini-series about President Franklin Roosevelt’s life

18 Practice continue… __ 6. Map of the world drawn in 1553 located in Library of Congress ___7. Photograph album containing pictures of classmates at Cal State University in 1923. ___8. Letter written by Emily Smith to her friend Paula Jones, May 3, 1826, describing her trip by wagon from North Carolina to Huntsville, Alabama and the log cabin her father was building ___9. Article about Martin Luther King, Jr., in People Magazine, 1988 ___10. Information about Creek Indians in World Book Encyclopedia 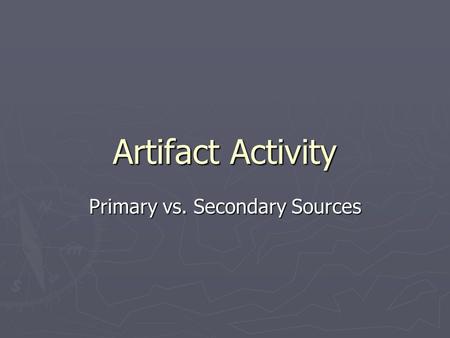