Presentation on theme: "English II Sentence Notes. So… what is a sentence? A sentence is a group of words with a subject and a verb that expresses a complete thought. Ex. The."— Presentation transcript:

2 So… what is a sentence? A sentence is a group of words with a subject and a verb that expresses a complete thought. Ex. The big, black dog barked at the cat. There are specific elements make up complete sentences.

3 Elements of a Sentence Phrases A group of two or more related words that is not a subject or verb Prepositions A word or group of words that shows the relationship of a noun or pronoun to another word in the sentence Common prepositions include: up, around, with, down, to behind, on, from and by If you’re wondering whether or not a word is a preposition, use the sample sentence “The squirrel ran ___________ the tree,” and fill in the blank with the word in question. Does the sentence make sense? It’s probably a preposition! Try it for yourself…

4 Subject & Predicate Subject The word (simple subject) or word group (complete subject) that tells whom or what the sentence is about. Ex. The big, black dog on the porch complete subject simple subject Predicate (verb) The verb (simple predicate) or the verb and all the words used to modify the verb (complete predicate) used to complete the meaning of the sentence and tell something about the subject Ex. barks at the yellow cat in the tree. Complete predicate verb

5 Elements continued… Independent clause A group of words with a subject and a verb that expresses a complete thought. It can stand by itself as a sentence. Ex. The dog plays outside. Subordinate conjunctions A – after, although, as, as if W – when, while, whenever H – O I – if T – than, though E – even though B – because, before U – unless, until S – since, so that Dependent clause Begins with a subordinate conjunction, contains a subject and a verb BUT does not express a complete thought Ex. When the boy gets home Ex. Because I like pizza Ex. If the baby cries

7 Simple Sentence Contains ONE independent clause and NO dependent clauses Ex. The black dog (on the porch)(by the swing) barks (at the yellow cat)(in the tree).

10 Complex Sentence Contains ONE independent clause and ONE OR MORE dependent clauses Ex. When the boy gets home, he feeds the dog. Ex. The boy feeds the dog when he gets home. I know what you’re asking yourself… WHEN DO I USE A COMMA FOR A COMPLEX SENTENCE?! See the next slide

12 Compound-Complex Sentence Contains TWO or more independent clauses and ONE or more dependent clauses Ex. Because the game did not start on time, we got home late, and I missed dinner. Ex. I had to do my homework, and I had to clean the house because my mother was sick, and she could not do it.

Download ppt "English II Sentence Notes. So… what is a sentence? A sentence is a group of words with a subject and a verb that expresses a complete thought. Ex. The." 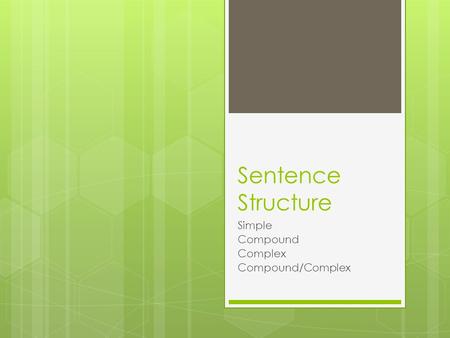 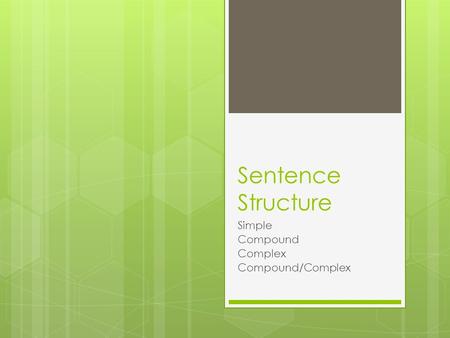