3 Areas of workIntended results Support to national efforts to achieve MDGs Increased national ownership of and awareness about MDGs; Mechanisms of MDG monitoring in place Support to national efforts in the areas of HIV/AIDS and Education Reduced HIV/AIDS infection rate among population groups targeted by specific interventions of the UNCT (HIV/AIDS Theme Group); Increased national commitment to meeting the EFA objectives set in Dakar Collaborative Programming UN Country Team operating on the basis of an integrated strategy which duly integrates MDGs (UNDAF)

4 Areas of workIntended results Communication and advocacy Increased awareness of the public about the UN, its work, values, messages, etc. Common premises and services Improved administrative effectiveness/efficiency of the UN operations in the country

5 Increased national ownership of and awareness about MDGs MDG Working Groups created in all the key Ministries and presently working on recommendations for MDGs monitoring and ways of facilitating the goals’ achievement in Moldova; National Commission on MDGs pending approval; 150 policy-makers, representatives of the non-government sector and the academia benefited from presentations and discussions during the MDG Workshop; Awareness of various target groups about MDGs enhanced through intensive communications efforts

7 Reduced HIV/AIDS infection rate among population groups targeted by specific interventions of the UNCT (HIV/AIDS Theme Group) Interventions supported by members of the UN Theme Group on HIV/AIDS led to a reduction of the share of intravenous drug users in the total number of new cases from 76% in 2000 to 69.85% in 2001 to 51.91% in 2003) Other achievements: UN HIV/AIDS Advocacy Strategy developed and being implemented; National HIV/AIDS Communication Strategy being finalized; Two UN HIV/AIDS facilitators which would support efforts of the UNCT pertaining to HIV/AIDS duly trained.

8 Increased national commitment to meeting the EFA objectives set in Dakar National Strategy on Education for All developed and approved by the Government; National Action Plan on Education for All developed and submitted to the Government for approval; 20 policy makers from Moldova and 25 from 18 other countries benefited from a series of capacity building activities on inclusive education planning and management; 30 local policy-makers trained in results- based management in education

9 UN Country Team operating on the basis of an integrated strategy which duly integrates MDGs The United Nations Development Assistance Framework (UNDAF) for 2001- 2006 was revised to integrate MDGs and reflect the results-based management requirements. UN House extended; Common services leading to a decreased ratio of administrative to programme costs Improved administrative effectiveness/ efficiency of the UN operations in the country

10 Communication and advocacy MDG Advocacy and Public Information Campaign: media training, MDG website, promotional materials, publications on MDGs, lessons on MDGs in schools and universities, competitions for journalists, etc. Support to the UN Reference Center, UN Documentation Center in Balti and UN Depository Library; inauguration of the second UN Documentation Center in Cahul; capacity building events for librarians from all over the country; International Day for the Eradication of Poverty Campaign; Support to the UN Journalists’ Club: trainings, meetings, information exchange, e-newsletter UN in Moldova magazine dedicated to the UN operations in the country) distributed to various partners; UN and UNDP Websites; Coverage of the UN GA session by the national television.

12 Lessons Learnt and Future Challenges Well-conceived joint interventions based on common goals and comparative advantages of individual actors lead to greater impact at smaller costs (e.g. HIV/AIDS, EFA, trafficking in human beings); Genuine national ownership – a key to success; Sustainability of interventions needs to be paid more attention to in order to ensure longer-term impact; More work is required on improving the measurement of results and ways to assess impact on the development situation in the country; Continuous information sharing between members of the UNCT, with the Government and other donors is an important task that requires more rigorous efforts. 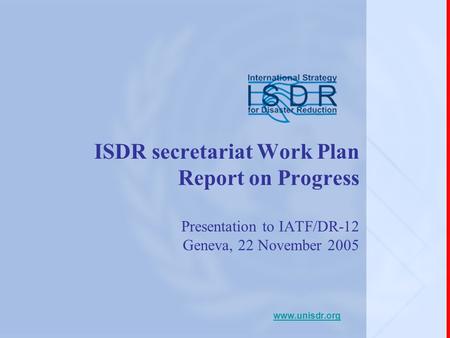 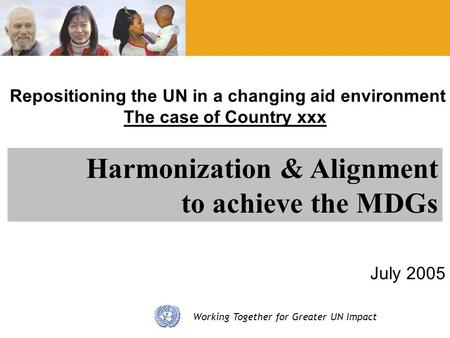 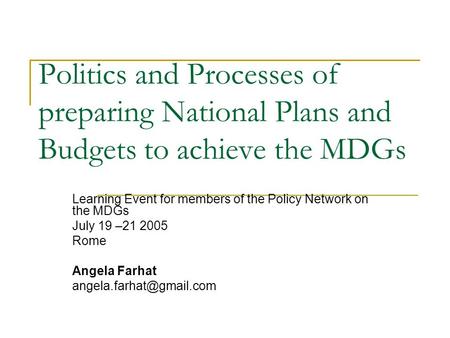 Politics and Processes of preparing National Plans and Budgets to achieve the MDGs Learning Event for members of the Policy Network on the MDGs July 19. 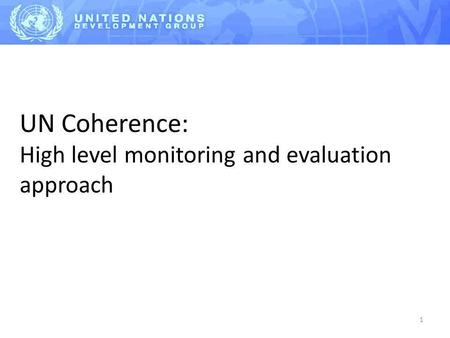 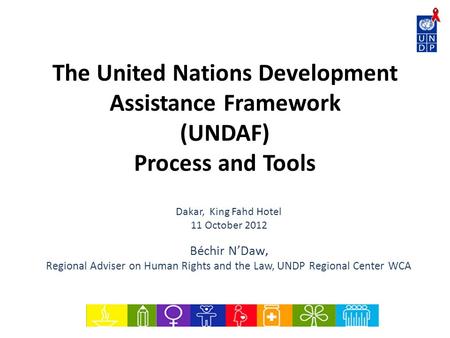 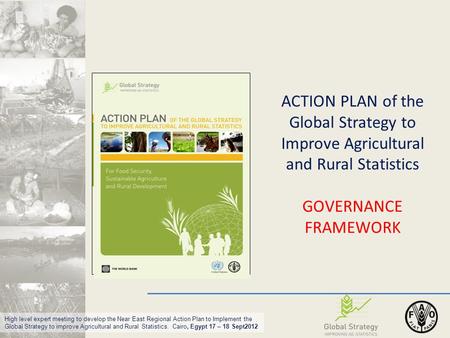 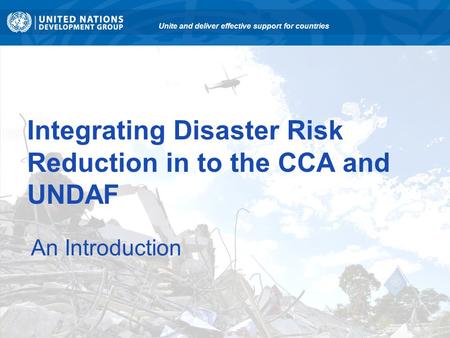 Integrating Disaster Risk Reduction in to the CCA and UNDAF An Introduction Unite and deliver effective support for countries. 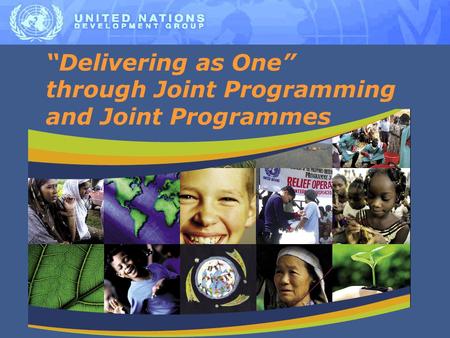 Presentation title goes here this is dummy text Joint Office : -What have we learned?- “Delivering as One” through Joint Programming and Joint Programmes. 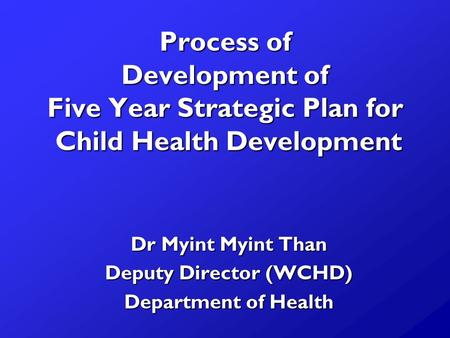 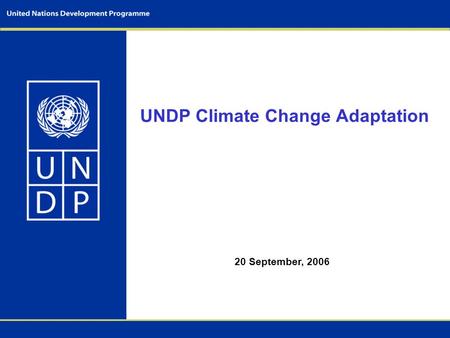 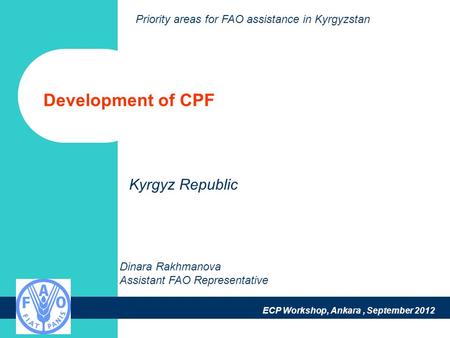 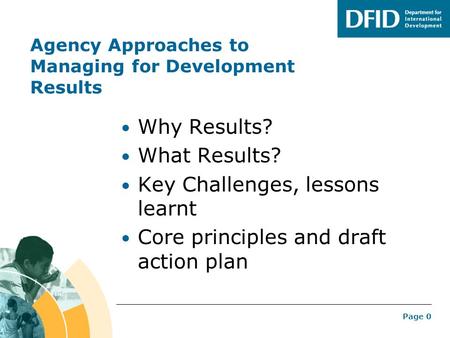 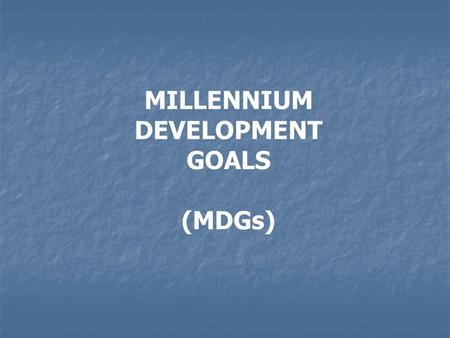 MILLENNIUM DEVELOPMENT GOALS (MDGs) Millennium Summit ‘The United Nations Millennium Declaration is a landmark document for a new century …….(we.