Presentation on theme: "The Periodic Table How the periodic table is put together."— Presentation transcript:

1 The Periodic Table How the periodic table is put together

2 Why is the Periodic Table important?
The periodic table is the most useful tool to a chemist. You get to use it on every test. It organizes lots of information about all the known elements.

3 Pre-Periodic Table Chemistry …
…was a mess!!! By 1860 about 60 elements were known and a method was needed for organization.  Imagine going to a grocery store with no organization!! Difficult to find information. Chemistry didn’t make sense.

8 Families on the Periodic Table
Families may be one column, or several columns put together. Families have names rather than numbers. (Just like your family has a common last name.)

10 Alkali Metals 1st column on the periodic table
Very reactive metals, always combined with something else in nature (like in salt). Soft enough to cut with a butter knife Malleable, ductile, good conductors of heat and electricity. Low melting points

11 Alkaline Earth Metals Second column on the periodic table. (Group 2)
Reactive metals that are always combined with nonmetals in nature. Several of these elements are important mineral nutrients (such as Mg and Ca

13 Boron Family Elements in group 13
Aluminum metal was once rare and expensive, not a “disposable metal.”

14 Carbon Family Elements in group 14
Most important family, since they are halfway between highly reactive metals and nonmetals Contains elements important to life and computers. Carbon is the basis for an entire branch of chemistry. Silicon and Germanium are important semiconductors.

15 Nitrogen Family Elements in group 15
Nitrogen makes up over ¾ of the atmosphere. Nitrogen and phosphorus are both important in living things. Most of the world’s nitrogen is not available to living things. The red stuff on the tip of matches is phosphorus.

17 Halogens Elements in group 17
Very reactive, volatile, diatomic, nonmetals Exist in all three states of matter Always found combined with other element in nature . Used as disinfectants and to strengthen teeth.

18 Noble Gases Elements in group 18
Do not chemically combine readily with other elements Have a full valence shell. Used in lighted “neon” signs

Download ppt "The Periodic Table How the periodic table is put together." 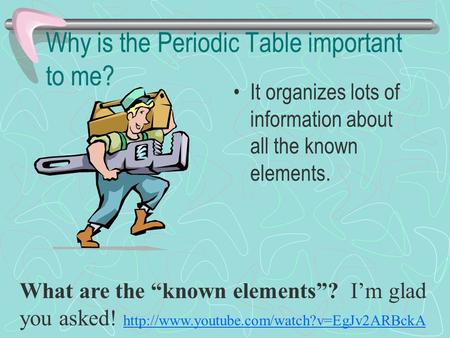 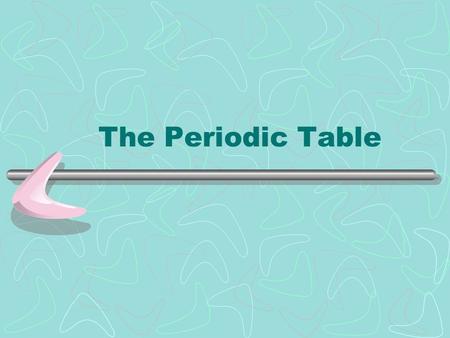 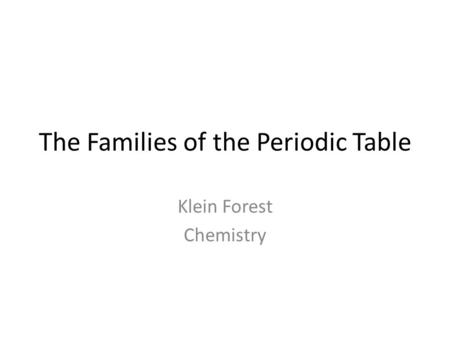