2 CIVIL LAW Involves disputes between individuals or groups of people. Typically, one group is seeking money or compensation from another group. Civil law cases do not involve criminal activity.

3 COURT OF APPEALS This court is the 2 nd highest-ranking in the state. There are 12 judges elected to 6 year terms. They elect one of their members to serve as the chief judge. This court also only hears cases appealed from lower-ranking courts and they determine if the proceedings and verdict were fair and in line with Georgia’s constitution. They do not have juries or witnesses.

4 CRIMINAL LAW This type of law deals with crimes that may have been committed and the punishment that is suitable for that crime. In a criminal case, a law has been broken and someone has already been arrested for that crime.

5 DEFENDANT This is the person who has been accused of a crime in a criminal court case, or the person who is being sued by a plaintiff in a civil case.

6 DEFENSE ATTORNEY This is a lawyer who represents a person accused of a crime. Their job is to try to prove the defendant (the person accused) is innocent of the charges against them.

7 DISTRICT ATTORNEY This person is a lawyer who represents the government in all criminal court cases. They argue for the laws of the state and are on the opposite side of the person(s) accused of a crime.

8 FELONY This is a very serious crime such as murder or burglary. The punishment for this type of crime is more than one year in prison, a fine of at least $1,000.00 or both.

9 GRAND JURY This group of people decide whether or not people accused of a crime should be indicted and made to stand trial for his or her actions.

10 INDICTMENT This is the formal accusation of a person who is thought to have committed a crime. These can not be made without proper justification. These are determined by a grand jury.

11 JURISDICTION This includes the geographical area controlled by a court or government agency as well as what kinds of cases can be heard within that type of court. For example, the Supreme Court serves all of Georgia and deals with all cases involving the death penalty and magistrate courts deal with individual counties and minor instances of breaking laws.

12 JUVENILE Citizens under the age of seventeen. They must follow all laws that older citizens have to follow as well as those that do not apply to citizens over seventeen. Examples of these include attending school and following curfews. They are also legally required to obey all reasonable and lawful directions or decisions of their parents or legal guardians.

13 MISDEMEANOR A crime that is considered to be a less serious offense. It is punishable by less than one year in prison, a fine of less than $1,000, or both. An example of this in Georgia is Theft by Shoplifting, where the value of the merchandise is under $300.00.

14 PLAINTIFF This is the person who initiates, or starts, a lawsuit in a court. In a civil case, the plaintiff is suing someone else. In a criminal case, the district attorney, or the government, is the one starting the case against a person accused of a crime.

15 SUPREME COURT This is the highest ranking court system in the state of Georgia. There are seven elected justices who are voted in for 6 year terms. Its main jobs are to review lower- court cases on appeal and to interpret the state constitution. It also automatically reviews all cases involving the death penalty. There are no juries or witnesses in this court.

17 TRIAL JURY This group of people are chosen and responsible for judging a person who has already been formally charged with a crime to determine his or her guilt or innocence. 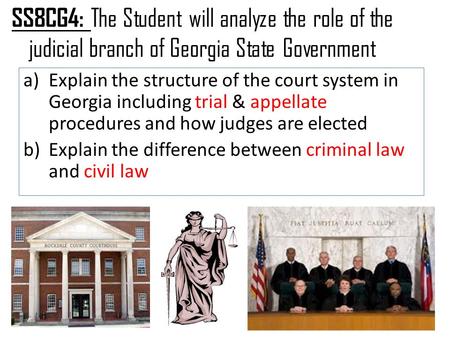 SS8CG4: The Student will analyze the role of the judicial branch of Georgia State Government Explain the structure of the court system in Georgia including. 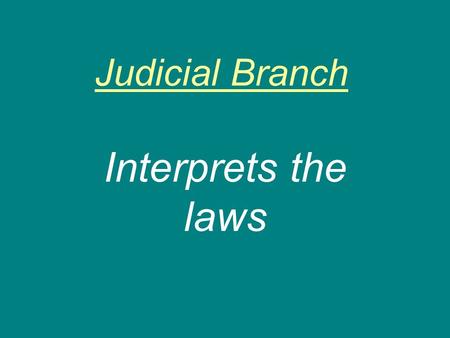