Presentation on theme: "April 2015 April 2015 Bellringer – What was the Exodus? People, places, times & events – along with why Do this on the bottom of packet page 8 Review A."— Presentation transcript:

1 April 2015 April 2015 Bellringer – What was the Exodus? People, places, times & events – along with why Do this on the bottom of packet page 8 Review A New Religion in Rome ~ Packet pages 8 & 9 Rise of Christianity Chart HW : Judaism and Christianity Quiz tomorrow (7.1 and 11.2 in your book- use your notes in packet)

2 14 April 2015 Goal – Basic beliefs of Christianity Bellringer – What was the Exodus? Explain all that you know. People, places, times & events – along with why At the top of packet page 5 A New Religion in Rome – Packet pages 5 & 6 HW : Read Section 11.2 – you will have a quiz on this Thursday!

6 Religious Tolerance and Conflict The Romans did not insist on imposing their beliefs on others. Roman would often adopt the gods of other cultures they conquered. In order to avoid offending any god, the Romans prayed to a wide variety of gods and goddesses. The Romans would only ban a religion when they thought that it would become a political problem.

7 Clashes with the Jews Clashes with Judaism- Since the Jews refused to worship any god but their own, some Romans thought the Jews insulted Rome’s gods by not praying to them. Also did not believe that the emperor was “part god” Still, the Romans did not attempt to ban Judaism. The Jews caused “trouble” by rebelling against Roman rule. The Jews were never successful. Emperor Hadrian banned Judaism from being practiced in the Empire. Jews revolted, lost, and were forced out of the city of Jerusalem.

8 A New Religion Christianity- The religion based on the life and teachings of Jesus Christ. Jesus was considered to be the Messiah or “God’s Anointed One” by the Christians. Jesus lived at the beginning of the first century AD/CE. His birth marks the shift from BC/BCE to AD/CE. By the age of 30 Jesus had started to travel and teach about religion. He emphasized – love God and other people. And the teaching of salvation (recuse from sin)

9 Jesus of Nazareth The stories of his actions are written in the New Testament in the Christian Bible. Jesus’ teaching challenged the authority of political and religious leaders. According to the Bible, Jesus was arrested around the year AD 30. Shortly after his arrest, Jesus was executed by crucifixion. It is the type of execution which a person was nailed to a cross.

10 Resurrection According to Christian beliefs, Jesus rose from the dead three days after he was crucified. This rise from the dead is known as the Resurrection in Christianity. (According to the History Textbook) After the Resurrection, Jesus’ Apostles traveled widely telling about Jesus and his teachings. After the Resurrection, the Apostles (12 disciples whom Jesus chose to receive special training) telling about Jesus and his teachings. They also wrote about his life and teachings – which can be found in the New Testament (The Gospels – Mathew, Mark, Luke & John) At first Christianity was spread only among Jews.

11 Messiah According to the World History Textbook, Early Christians believe that the Resurrection was a sign that Jesus was the messiah and son of God Some people began to call him Jesus Christ, from the Greek words for Messiah, christos It is from this word that the words Christian and Christianity later developed

12 Christianity Within a hundred years of Jesus’ death, there were thousands of Christians in the Roman Empire. Some officials arrested and killed Christians who refused to worship Rome’s gods – some feared Christians would cause unrest, so they banned Christianity. Christianity became a “problem” and was persecuted until Emperor Constantine became Christian himself….in the early 300s CE. A later Emperor declared Christianity Rome’s official religion. Note – Later the Birth of Jesus will mark the switch from BC (Before Christ) to AD (anno Domini)

Download ppt "April 2015 April 2015 Bellringer – What was the Exodus? People, places, times & events – along with why Do this on the bottom of packet page 8 Review A." 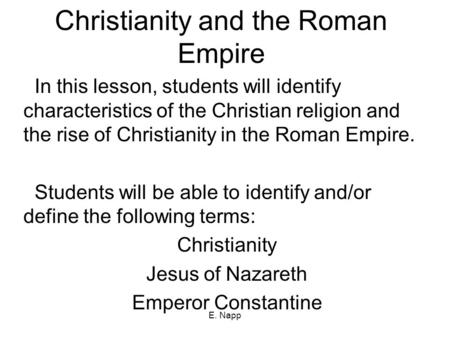 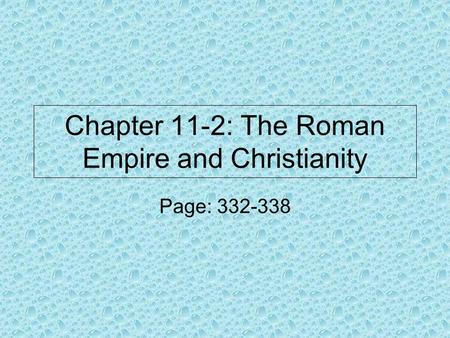 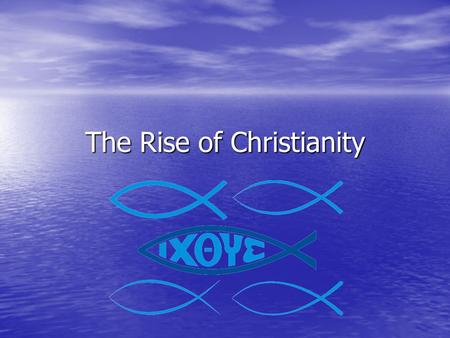