1 Freud Psycho-Sexual Theory Oh, how sick can we go…

3 Freud Psycho-Sexual Theory Freud proposed that there were 5 stages of development. Freud believed that few people successfully completed all 5 of the stages. Instead, he felt that most people tied up their libido at one of the stages, which prevented them from using that energy at a later stage.

5 Freud Psycho-Sexual Theory ORAL Stage This occurs from birth to about 1 year, and the libido is focused on the mouth. The individual may be frustrated by having to wait on another person, being dependent on another person. Being fixated at this stage may mean an excessive use of oral stimulation, such as cigarettes, drinking or eating.

11 Freud Psycho-Sexual Theory PHALLIC Stage This period starts about age 4-5 years. Some critical episodes for development occur during this stage, but these episodes occur differently for boys and girls.

12 Freud Psycho-Sexual Theory PHALLIC Stage Continued Oedipus conflict - the boy begins to have sexual desires for his mother, and sees his father as a rival for her affections. The boy begins to fear that his father is suspicious of his longing for his mother, and that the father will punish him for his desires. That punishment, the boy fears, will be castratation, which brings us to the second critical episode for this stage.

14 Freud Psycho-Sexual Theory PHALLIC Stage Continued Castration anxiety. The fear of castration make the boy anxious. This anxiety begun with the fear of punishment from the father leads to the boy thinking that the father hates him eventually becomes unbearable and the boy renounces his sexual feelings for his mother and chooses instead to identify with his father, and hopes to someday have a relationship with a woman (though not his mother) just like dear old dad has with his mother.

17 Freud Psycho-Sexual Theory PHALLIC Stage Continued Just as with boys, girls begin to suspect the same sex parent knows about their attraction to the opposite sex parent, and they hate them for it. These feelings go round and round for awhile until the point when the girls renounce their feelings for their fathers and identify with their mothers.

19 Freud Psycho-Sexual Theory LATENCY Stage This period occurs after the Oedipus conflict has been resolved and the feelings that were aroused during that time have subsided. This lasts from about the age of 7 until puberty, and this is a period of rest where there are no developmental events

21 Freud Psycho-Sexual Theory GENITAL Stage Begins at puberty involves the development of the genitals, and libido begins to be used in its sexual role. However, those feelings for the opposite sex are a source of anxiety, because they are reminders of the feelings for the parents and the trauma that resulted from all that. 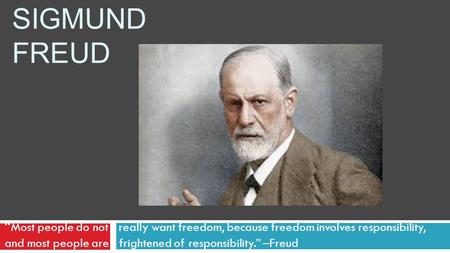