3 Early Years Pablo Picasso started to paint when he was eight years old. From the age of five on, Pablo would get drawing lessons at school, in Malaga. Picasso's father was an art teacher.

5 Blue Period Pablo Picasso's Blue Period refers to a series of paintings in which the color blue dominates and which he painted between 1901 and 1904. Picasso was an accomplished classical painter, but like many young artists of his time, he was unhappy with the rules of traditional art. Pablo Picasso is most known for his Cubism style. At the time of Picasso's Blue Period, abstract art as we know it today didn't yet exist.

6 The Color Blue We associate colors with emotions, the color blue being associated with melancholy or sadness. When Picasso's close friend Carlos Casagemas commits suicide at the age of 19, Picasso expresses his deep sadness through his Blue Period paintings. When Picasso lived in Paris during this time, he was very poor, which also added to his sadness in his paintings. This may have been the reason why he was unable to sell his work then, because buyers did not like this sad art.

10 Your Assignment Objective: I will create a drawing inspired by Picasso’s Blue Period that expresses emotion. Think about what emotions you must show, and how can you accurately express these emotions. Think about a time when you were sad. What do you remember about this time? What could you use in a drawing? Try not to draw an entire scene. Think about something that could represent sadness, and could be drawn large. This will make your artwork more successful. We will be using oil pastels for this project. 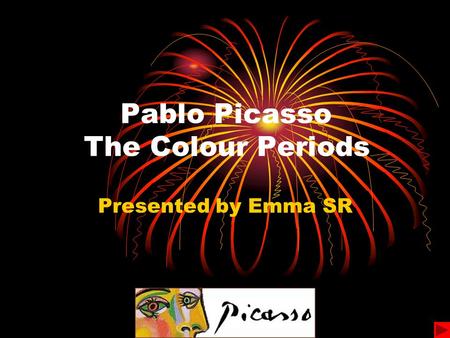