2 The Women’s Liberation Movement The movement for women’s rights had many different names: the women’s liberation movement, the feminist movement, and the equal rights movement. Core belief of the women’s liberation movement was feminism—the conviction that women and men should be socially, politically, and economically equal. Feminists cheered the passage of the Civil Rights Act of 1964, which banned discrimination in employment. Still, fighting gender-based discrimination was given low priority.

3 NOW The National Organization for Women (NOW) Fought gender discrimination in the workplace, schools, and the justice system Lobbied government, filed lawsuits, staged rallies and marches Betty Friedan and Pauli Murry ERA The Equal Rights Amendment (ERA) Promised equal treatment for men and women in all spheres, not just employment Some saw the ERA as a threat to family life Phyllis Schlafly and other conservatives campaigned to defeat the ERA The Women’s Liberation Movement Roe v. Wade Supreme Court case that struck down state laws that banned abortion Argued that such laws violated a constitutional right to privacy. Sparked a debate that continues to this day.

4 Effects of the Women’s Movement The number of women holding professional jobs increased. More women moved into senior positions in the government. –More female politicians were elected to Congress. The feminist movement slowed its pace in the late 1970s. –There was a perception that it only benefited wealthy white women.

5 Living Conditions Did not share in the prosperity of the 1950s Highest unemployment rates in the nation Average income was less than half that of white American men Suffered disproportionately from poor health Termination Policy Plan to draw Native Americans out of the isolated reservations and into mainstream society Method used was to stop federal services to reservations and relocate Native Americans to cities Policy was a disaster Native Americans in the Early 1960s A Movement In 1961 a group of 700 Native Americans held a conference to oppose the termination policy. Drafted the Declaration of Indian Purpose Marked the beginning of the Red Power movement

7 Native Americans Fight for Fairness Occupation of Alcatraz A group of Native Americans tried to reclaim Alcatraz Island. Claimed that the Treaty of Fort Laramie gave them the right to use any surplus federal territory The occupation lasted for 18 months, until federal marshals removed the group by force. This incident drew public attention to the plight of Native Americans. Partly as a result, New Mexico returned 48,000 acres of land to the Taos Pueblo in 1970. AIM The American Indian Movement was founded in Minnesota in 1968 Became the major force behind the Red Power movement Called for a renewal of traditional cultures, economic independence, and better education for Indian children Russell Means—one of AIM’s best-best known leaders AIM sometimes used forceful tactics –the Trail of Broken Treaties –Occupation of Wounded Knee

8 Other Organizations in the Fight for Fairness National Indian Education Association—fought to improve access to education Native American Rights Fund—provided legal services Council on Energy Resource Tribes—helped its member nations gain control over their natural resources and choose whether to protect or develop them These groups and others worked to protect Native Americans’ rights, improve standards of living, and do it all in a manner consistent with Native Americans’ cultures and traditions.

9 Accessing the Progress of the Fight for Fairness Congress passed a number of laws in the 1970s to enhance education, health care, voting rights, and religious freedom for Native Americans. The Red Power movement instilled greater pride in Native Americans and generated wider appreciation of Native American culture. Despite these accomplishments, Native Americans continued to face many problems. Unemployment remained high and the high school dropout rate among Native Americans was the highest in the nation.

10 Attitudes Americans became more casual in the way they dressed and more open- minded about lifestyles and social behavior. Attitudes about sexual behavior loosened. People explored topics that were once taboo. Art and Film New style called pop art emerged. Aimed to appeal to popular tastes Andy Warhol led the movement. Film broadened its subject matter as censorship rules relaxed. Film industry adopted a rating system. Legacy of the Counterculture Music The Beatles brought new techniques and ideas to rock and roll. Bob Dylan wrote political songs and became the spokesperson for his generation. Woodstock Music and Art Fair was the celebration of an era. 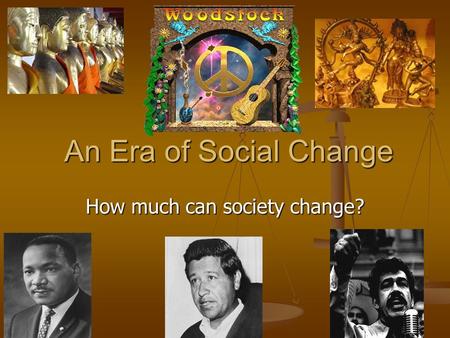 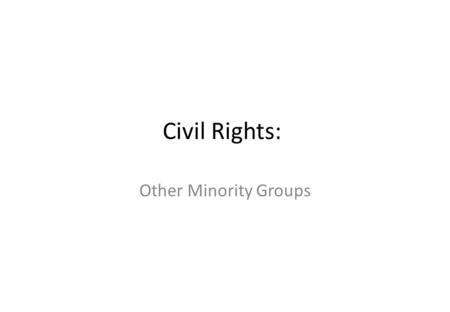 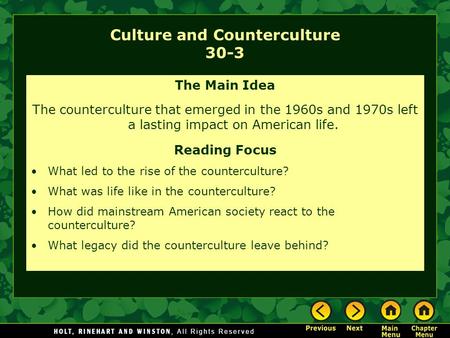 Culture and Counterculture 30-3 The Main Idea The counterculture that emerged in the 1960s and 1970s left a lasting impact on American life. Reading Focus. 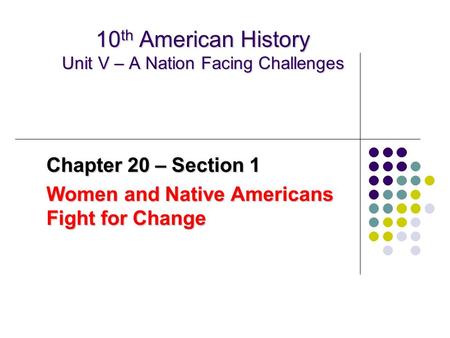 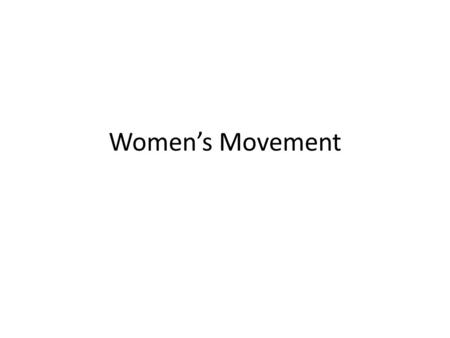 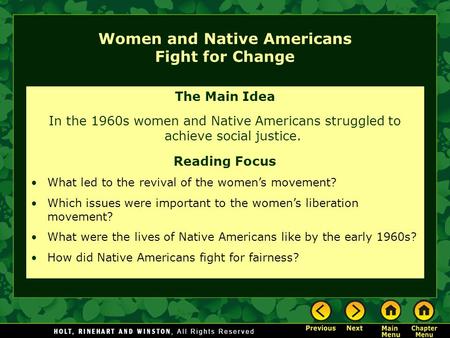 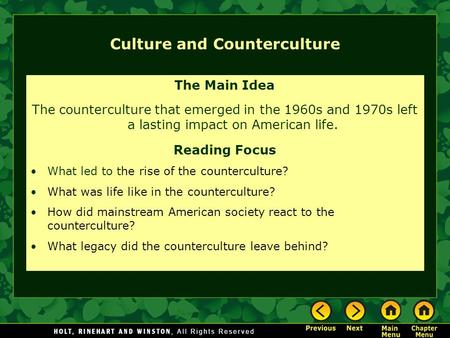 Culture and Counterculture The Main Idea The counterculture that emerged in the 1960s and 1970s left a lasting impact on American life. Reading Focus What. 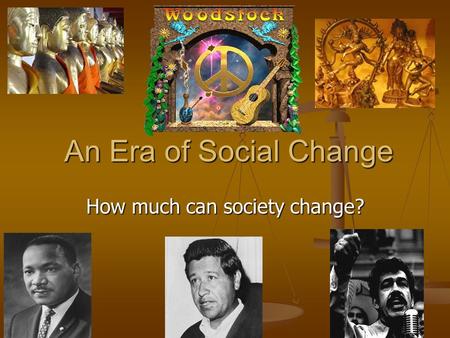