1 Parliament Limits the English Monarchy
Ch. 5 sec. 5 Standard List the principles of the Magna Carta (1215), the English Bill of Rights (1689)

5 King Charles I continued
Charles ignores Petition of Right Dissolves Parliament. Why?? So how does Charles get his money? Fees Fines taxes

6 English Civil War ( ) Charles offends Puritans and Presbyterians of Scotland. How? Scots assemble an army and threaten to invade Charles needs money to fight and must ask Parliament. How do you think Parliament reacts? Charles attempts to arrest members of Parliament

7 English Civil War, continued
Against the king Roundheads- were mostly Puritans and members of Parliament Led by Oliver Cromwell Loyal to the king Royalists Cavaliers

8 Oliver Cromwell New Model Army 1647 captured Charles
1649 Charles is found guilty of TREASON!!!! By a jury!! What is treason? Innocent or guilty?

9 Charles I is Executed in 1649!
Why is this significant?

11 Charles II and the Restoration
1660 Charles II (son of Charles I) comes back to rule England Why did England ask the royal family to come back and rule? Habeas Corpus Act (1679)

12 Who Will Inherit the Throne?
Whigs Do not want a Catholic ruler Charles II’s brother is James II, a Catholic Tories Support James as the next king. The Whigs and the Tories will become the first political parties in England

13 James II Appoints Catholics to government positions- Who does this upset? In 1688 his son is born! Why is this important?

15 Effects of the Glorious Revolution
Ended the idea of the divine right of kings in England Turned England into a Constitutional Monarchy!!!

19 English Bill of Rights, cont.
Consent of the Governed- free elections of Parliament, they must have free speech and meet regularly Rights of the Individual- government cannot deprive a citizen of life, liberty or property. No cruel and unusual punishment and freedom of petition.

20 Ch. 5 Sec5 Parliament Limits The English Monarchy
What problems did King James I have with Parliament? Why did Charles I always need money? What is the Petition of Right? Why was it important? Why did the Scots rebel against King Charles? Why did Charles try to arrest the leaders of Parliament? Those who remained loyal to King Charles during the English Civil War were called? What were the supporters of Parliament called? Who was the leader of the New Model Army? Why was Charles put on trial? Why was the execution of Charles “revolutionary?” After the execution of Charles, what type of government did England become? How did the Puritans attempt to reform society? What is the Restoration? What rights do people have under the Habeas Corpus Act? Who are the Whigs? Who are the Tories? Why were English Protestants terrified when James II had a boy? What was the Glorious Revolution? What type of government did England became after William and Mary took power? Under the English Bill of Rights (1689) what could a ruler not do? What is the role of the cabinet in English government? What is a prime minister? Copy questions and answer in Complete sentences!!

21 Ch. 5 Sec5 Parliament Limits The English Monarchy
A. Put the historical events in their order of occurrence English Bill of Rights Habeas Corpus Act Execution of Charles I James I dies Petition of Right English Civil War Restoration Glorious Revolution Charles II dies James I becomes King B. Answer in a paragraph What were the causes and effects of the Glorious Revolution? 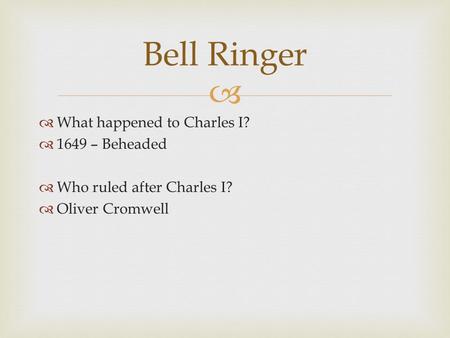 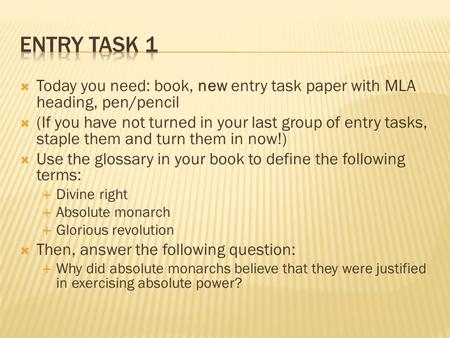 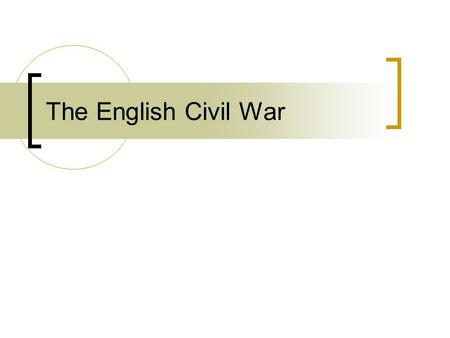 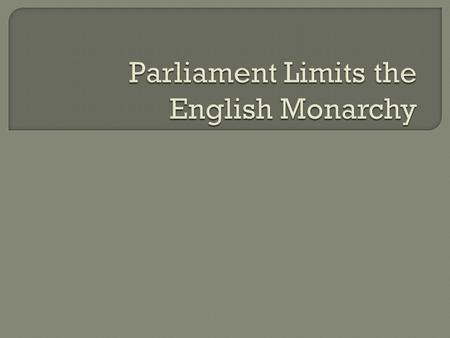