Presentation on theme: "Is revelation because it tells us what God wants us to know about Jesus through the words written by inspired writers It contains Jesus’ words, actions,"— Presentation transcript:

2 Is revelation because it tells us what God wants us to know about Jesus through the words written by inspired writers It contains Jesus’ words, actions, and his meaning for people. It is a record of faith of the first Christians

3 Divided into FOUR SECTIONS: 1. Gospels: Matthew, Mark, Luke and John 2. Acts of the Apostles: describes early Christian life 3. Epistles: a series of letters 4. Revelations: the only prophetic book in the New Testament

4 Christian scripture contains 27 books that we refer to as the canon, meaning rules. These books are regarded as authoritative for Christian faith and life.

6 The word gospel means “good news” The first four books of the New Testament– Matthew, Mark, Luke and John– tell the good news about Jesus and his ministry

8 The word synoptic means “with the same eye” or “seeing together” Matthew, Mark and Luke present the basic story of Jesus in similar ways, including the order of the material, the stories told, the sayings of Jesus, even using many of the same words in parallel accounts. For this reason they are called the Synoptic Gospels.

9 “Q” is short for “Quelle,” a German word meaning “source” Defined as the “common material” found in Matthew, Mark and Luke “Q” is material which represents a written collection of saying of Jesus

11 On the other hand, while the Gospel of John sometimes resembles the other three Gospels, it tells the story of Jesus in significantly different ways, including a different order of events, different perspectives and points of emphasis, and with its own unique vocabulary and style.

12 Mark wrote the first Gospel shortly before 70 C.E. The Gospel was written in Rome It was written for a gentile (non Jewish) audience It is the shortest of the four gospels It narrates the ministry of Jesus and concentrates particularly on the last week of His life.

13 Much of the Gospel of Matthew is based on the Gospel according to Mark It was written shortly after 70 C.E. It was probably written in Antioch, the capital of the Roman province of Syria If focuses on how Jesus fulfilled Jewish prophecies It is a written collection of sayings of Jesus and a source of Church history

14 This Gospel was written between 70 and 90 C.E. Luke is a Syrian from Antioch (in present day Turkey) The authors were highly literate in Hebrew Scriptures Continues the biblical history of God’s dealings with humanity found in the Hebrew Scriptures, showing how God’s promise to Israel have been fulfilled in Jesus This gospel has a special emphasis on prayer, the activity of the Holy Spirit and joyfulness Written as a historical account of Jesus’ earthly ministry and the church after Jesus’ resurrection

15 This Gospel is quite different in character from the three synoptic gospels It contains many details not found in the other gospels It was probably written around 90 C.E. It is highly literary and symbolic This Gospel urges people to reject false teachings and focuses heavily on Jesus’ miracles

Download ppt "Is revelation because it tells us what God wants us to know about Jesus through the words written by inspired writers It contains Jesus’ words, actions," 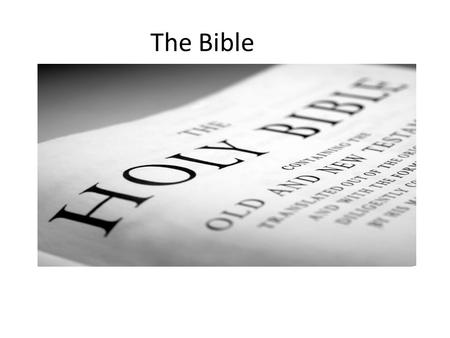 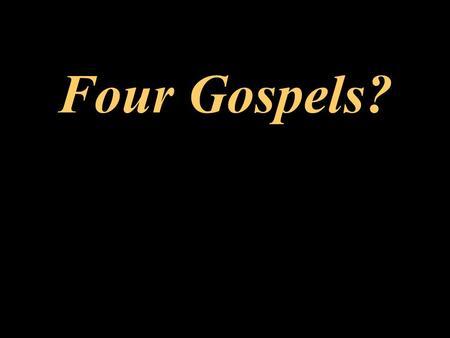 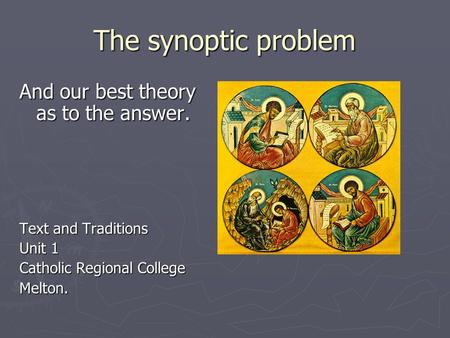 The synoptic problem And our best theory as to the answer. Text and Traditions Unit 1 Catholic Regional College Melton.