1 The Pros of Genetically Modified Foods By: Sara Gregg

2 Pros The world’s dramatically increasing population needs a food source that can keep up. GM foods are: –pest, disease, and herbicide resistant –cold, drought, and salinity tolerant –more nutritional These advantages lead to a more productive yield, so more can be sold for less.

3 Crops Over 40 plant varieties have met federal requirements for commercialization –ex. Tomatoes and cantaloupes with modified ripening characteristics –Soybeans and sugarbeets that are resistant to herbicides –Corn and cotton plants with pest resistance

5 Nutrition-Rich Food Many Third-world countries have a malnourished population. To supply these nutrients, food staples in these countries have been genetically modified to contain the vitamins lacking. Ex. A “golden rice” that contains beta-carotene was created to combat blindness, which is caused by a lack of Vitamin A.

6 Prevalence So far, GM crops are only present, in the US, in highly processed foods, such as breakfast cereals and vegetable oils. –These are found in small quantities, though, since companies obtain their raw ingredients from many sources, and when they are pooled together, it is likely that some GM foods are in the mix.

8 Facts In 2006, 10.3 million farmers planted 252 million acres of GE crops in over 22 countries growth of crops is forecasted to rise exponentially in developing countries, whereas it is expected to plateau in industrialized ones

9 Genetic Similarities Some think that placing a gene from a animal into a plant is wrong, but DNA is DNA, and you aren’t really introducing a foreign substance to the plant. The same four bases make up every organism alive. Ex. fish genes into a potato plant 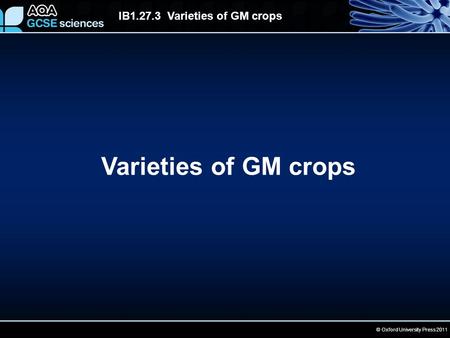