5 Displaying Relationships: Scatterplots
A scatterplot shows the relationship between two quantitative variables measured on the same individuals. The values of one variable appear on the horizontal axis, and the values of the other variable appear on the vertical axis. Each individual in the data appears as a point on the graph. How to Make a Scatterplot Decide which variable should go on each axis. • Remember, the eXplanatory variable goes on the X-axis! Label and scale your axes. Plot individual data values. See the SEC Football example on p

9 Check Your Understanding
Try the CYU on p.149

13 Check Your Understanding Correlation Practice
For each graph, estimate the correlation r and interpret it in context.

14 Calculating Correlation
The formula for r is a bit complex. It helps us to see what correlation is, but in practice, you should use your calculator or software to find r. How to Calculate the Correlation r Suppose that we have data on variables x and y for n individuals. The values for the first individual are x1 and y1, the values for the second individual are x2 and y2, and so on. The means and standard deviations of the two variables are x-bar and sx for the x-values and y-bar and sy for the y-values. The correlation r between x and y is: 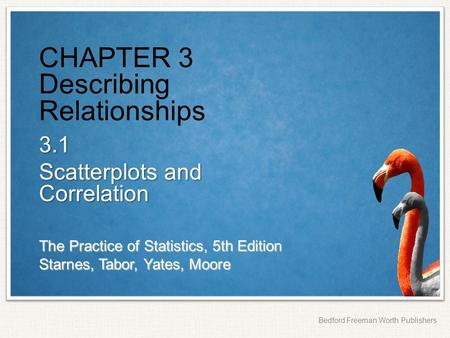