4 Scatterplots The most useful graph for displaying relationships between two quantitative variables is a scatterplot. A scatterplot shows the relationship between two quantitative variables measured on the same individuals. The values of one variable appear on the horizontal axis, and the values of the other variable appear on the vertical axis. Each individual in the data appears as a point in the graph.

8 Describing Scatterplots
Direction – does it have a positive or negative correlation? Form – is it linear, quadratic, exponential? We really care about linear or not linear. Strength – how closely do the points follow a clear form? FODS (Form, Outlier, Direction, Strength)

10 The correlation r measures the direction and strength of the linear relationship between two quantitative variables. (always a number between -1 and 1)

Download ppt "Warm-Up A trucking company determines that its fleet of trucks averages a mean of 12.4 miles per gallon with a standard deviation of 1.2 miles per gallon." 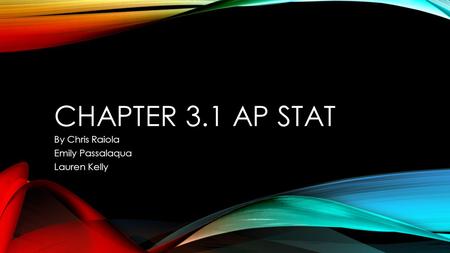