4 How to Make a Scatterplot
Displaying Relationships: Scatterplots The most useful graph for displaying the relationship between two quantitative variables is a scatterplot. Definition: A scatterplot shows the relationship between two quantitative variables measured on the same individuals. The values of one variable appear on the horizontal axis, and the values of the other variable appear on the vertical axis. Each individual in the data appears as a point on the graph. How to Make a Scatterplot *Decide which variable should go on each axis. Remember, the eXplanatory variable goes on the X-axis! *Label and scale your axes. *Plot individual data values.

5 Since Body weight is our eXplanatory variable, be sure to place it on the x-axis!
Example 2: Ninth-grade students at the Webb Schools go on a backpacking trip each fall. Students are divided into hiking groups of size 8 by selecting names from a hat. Before leaving, students and their backpacks are weighed. Make a scatterplot of the relationship between body weight and pack weight. Here are data from one hiking group in a recent year: Body weight (lb) 120 187 109 103 131 165 158 116 Backpack weight (lb) 26 30 24 29 35 31 28

7 Example 3: In the last example, we constructed the scatterplot shown that displays the body weights and backpack weights of a group of hikers. Describe what the scatterplot reveals about the relationship between body weight and pack weight. Outlier There is one possible outlier, the hiker with the body weight of 187 pounds seems to be carrying relatively less weight than are the other group members. Strength Direction Form There is a moderately strong, positive, linear relationship between body weight and pack weight. It appears that lighter students are carrying lighter backpacks.

11 How to Calculate the Correlation r
The formula for r is a bit complex. It helps us to see what correlation is, but in practice, you should use your calculator or software to find r. How to Calculate the Correlation r Suppose that we have data on variables x and y for n individuals. The values for the first individual are x1 and y1, the values for the second individual are x2 and y2, and so on. The means and standard deviations of the two variables are x-bar and sx for the x-values and y-bar and sy for the y-values. The correlation r between x and y is:

12 Interpreting correlation
Example 5: Our earlier scatterplot of the body weight and pack weight data for the 8 hikers is shown below. For these data, r = a) Interpret the value of r in context. The correlation of confirms what we see in the scatterplot: there is a moderately strong, positive linear relationship between body weight and backpack weight for these 8 hikers. b) What effect would removing the hiker with the heaviest body weight from the data have on the correlation? Justify your answer. Removing the outlier would increase the correlation since the remaining 7 points are more tightly clustered in a linear pattern.

13 AP EXAM TIP: If you’re asked to interpret a correlation, start by looking at a scatterplot of the data. Then be sure to address direction, form, strength, and outliers (sound familiar?) and to put your answer in context. Be careful: a value of r close to 1 or −1 does not guarantee a linear relationship between two variables. A scatterplot with a clear curved form can have a correlation that’s near 1 or −1. Always plot your data!

14 Facts about Correlation
How correlation behaves is more important than the details of the formula. Here are some important facts about r. 1. Correlation makes no distinction between explanatory and response variables. It makes no difference which variable you call x and which you call y in calculating the correlation. 2. r does not change when we change the units of measurement of x, y, or both. Measuring height in centimeters rather than inches and weight in kilograms rather than pounds does not change the correlation between height and weight. 3. The correlation r itself has no unit of measurement. It is just a number. Cautions: Correlation requires that both variables be quantitative. Correlation does not describe curved relationships between variables, no matter how strong the relationship is. Correlation is not resistant. r is strongly affected by a few outlying observations. Correlation is not a complete summary of two-variable data.

15 Correlation Practice Example 5: For each graph, estimate the correlation r and interpret it in context. The correlation is about 0.9. There is a strong, positive linear relationship between the number of boats registered in Florida and the number of manatees killed. 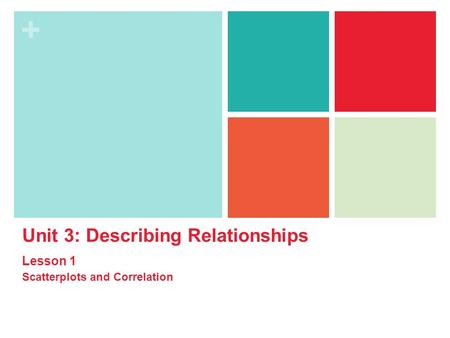