1 Some Questions about Morphology

2 What is a morpheme? The smallest linguistic unit of meaning
Can not be analyzed further ept, mit, luke, ceive are problematic examples yet they are morphemes

3 What is a derivational morpheme?
Adding a morpheme to a root to give a new word…often results in change in syntactic category

4 What is an inflectional morpheme?
Bound grammatical morphemes that are affixed to a word

6 What is a free morpheme? Constitute words themselves; can stand on their own

7 Which is a more productive morpheme…un or able
able is more productive because it can be added to any verb but un has limitations Often there is a lexical gap: Unsad and ept

8 What is an infix? An affix inserted in the middle of the word.

10 What is a compound Joining two or more words to form a new word
Meaning may not always be inferred from the two morphemes and must be stored separately in the brain flatfoot, egghead

11 What is a back-formation?
words that came into existence from elimination of some affix…often this is done by mistake editor, hawker, stoker, hawker are all examples of back formations My daughter’s example of razor Some examples such as donation just show a normal morphological process

12 What is an acronym? Words derived from initials
Question: when do you use an article? FBI, CIA, CDC NAFTA, AIDS, OPEC But…UGA, KSU, IBM, NBC

13 What is the OED? Oxford English Dictionary

14 Who was Dr. Samuel Johnson?
Lexicographer; published Dictionary of the English Language in 1755 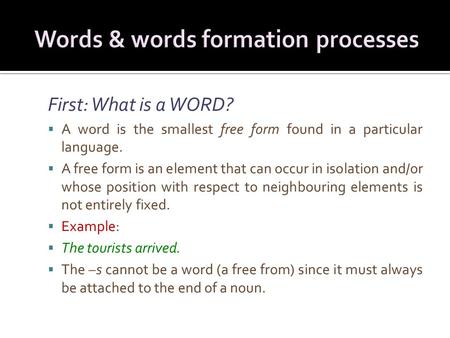 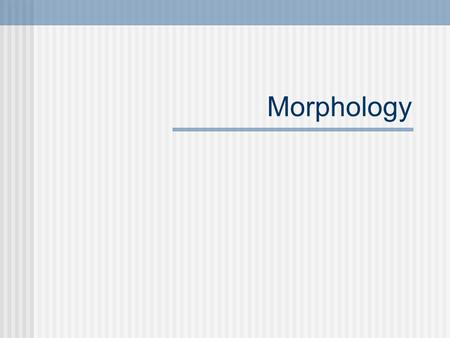