Presentation on theme: "There are levels of organization in an ecosystem:"— Presentation transcript:

3 Ecosystem – includes all of the members of a community along with the physical environment in which they live. The living and non-living parts of an ecosystem function together. An ecosystem is the structural and functional unit studied in Ecology. Biosphere – the portion of the Earth in which all living things exist. Water, soil, and air are included with the living things in the biosphere. Mrs. Degl

4 What makes an ecosystem?
The ecosystem involves interactions between living and nonliving things. Two requirements must be met for a stable ecosystem to exist: There must be a constant supply of energy (sunlight for photosynthesis). There must also be living organisms that can incorporate the energy into organic compounds (food). These are autotrophs. There must be a recycling of materials between living organisms and the non-living materials (environment). Mrs. Degl

5 An ecosystem had both abiotic (non-living) and biotic (living) parts.
The abiotic factors of an ecosystem include the physical and chemical factors that affect the capacity of an organism to live and reproduce. These factors are: 1. Intensity and duration of light 2. Temperature range 3. Amount of water 4. Type of soil 5. Availability of inorganic substances (minerals) and gases (O2, CO2, N) 6. pH of soil/water Mrs. Degl

6 Limiting Factors Abiotic factors vary between environments. Because the abiotic factors in an environment determine which plants/animals live there, they are called limiting factors. For example, the amount of water in a desert limits the kinds of plants and animals that can live there. Mrs. Degl

7 Biotic Factors Biotic factors include all of the living things that directly or indirectly affect the environment. Thus the organisms, their presence and parts, interaction, and wastes all act as biotic factors These interactions include: 1. Nutritional relationships 2. Symbiotic relationships Mrs. Degl

8 Nutritional Relationships
Involves the transfer of nutrients from one organism to another within an ecosystem. In terms of nutrition, organisms are either autotrophs or heterotrophs. Autotrophs are organisims that can use energy from the environment to make their own food from inorganic compounds. Heterotrophs cannot make their own food and must obtain nutrients from other organisims. Mrs. Degl

10 Symbiotic Relationships
Different organisms may live together in a close association This is known as symbiosis There are three types: 1. Commensalism 2. Mutualism 3.Parasitism KEY: + = benefits - = harmed o = not affected Mrs. Degl

12 Mutualism (+ , +) In this relationship both organisms benefit from each other Ex: protozoan living in the digestive tract of termites Wood eaten by termites is digested by the protozoan. The nutrients released supply both organisms Mrs. Degl

13 Parasitism (+ , - ) In this relationship, the parasite benefits at the expense of the host Ex: athlete’s foot fungus on humans tapeworm and heartworm in dogs Mrs. Degl

14 Food Chains Producers: Autotrophs that use photosynthesis to make food
Consumers: All heterotrophic organisms that obtain energy from the food that they eat. Primary Consumers (Herbivores): feed on green plants and algae Secondary Consumers (Carnivores): feed on primary consumers Omnivores eat plants and animals. Humans are omnivores. Decomposers: (saprophytes) Break down the remains of dead organisms and organic wastes. They return the nutrients to the environment, where they can be recycled and used again. Bacteria and fungi are examples. The recycling is essential to an environment so dead remains do not accumulate. Food Chains Mrs. Degl

16 Food Chains vs. Food Web A food chain is the transfer of energy from green plants through a series of organisms with repeated stages of eating and being eaten. Green plants obtain energy from Sunlight (photosynthesis) and all other organisms obtain energy from the breakdown of food. In real life most organisms eat more than one organism and are eaten by more than one organism, so food chains are interconnected forming food webs. Food webs have the same levels of organisms but the flow of energy and materials is more complex. Mrs. Degl

17 Food Chains vs. Food Web A food chain is the transfer of energy from green plants through a series of organisms with repeated stages of eating and being eaten. Green plants obtain energy from Sunlight (photosynthesis) and all other organisms obtain energy from the breakdown of food. In real life most organisms eat more than one organism and are eaten by more than one organism, so food chains are interconnected forming food webs. Food webs have the same levels of organisms but the flow of energy and materials is more complex. Mrs. Degl

18 Pyramid of Energy The greatest amount of energy in a community is present in the producer level. Only a small portion of this energy is passed on to primary consumers, and only a smaller portion is passed on to secondary consumers. An energy pyramid can be used to show the loss of usable energy at each feeding (trophic) level. Mrs. Degl

20 Carrying Capacity In every ecosystem on Earth, there are limited amounts of available resources. These include food, water, energy, minerals, and space. The amount of resources available limits the number of organisms that an ecosystem can support. The maximum number of organisms of a particular type that can be supported in an area is known as the carrying capacity. If the population increases significantly above it’s carrying capacity, many individuals die off because of insufficient resources. Mrs. Degl

21 Competition Different species living in the same environment, or habitat, may require the same resources. When the resources are limited, competition occurs among the species. Competition- is the struggle between different species for the same limited resources. The more similar the needs of the species, the more intense the competition. Each species occupies a niche in the community. A niche is the role the species plays, and includes the type of food it eats, where it lives, where it reproduces, and its relationships with other species. When two different species compete for the same niche in a community, the weaker species is usually eliminated establishing one species per niche in a community. Mrs. Degl

Download ppt "There are levels of organization in an ecosystem:" 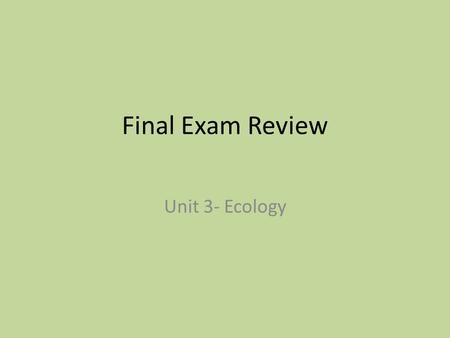