2 8.1 Formation of Solutions
DISSOLVING Recall that a solution is a homogeneous mixture of two or more substances. Solute- substance whose particles are dissolved in a substance. Solvent-The substance in which the solute dissolves. These can be solids, liquids, or gases. Most familiar is liquids.

3 3 WAYS TO FORM SOLUTIONS Substances can dissolve in liquids in three ways: dissociation, dispersion, and ionization DISSOCIATION OF IONIC COMPOUNDS The particles that hold solutes to each other and solvents to each other must be overcome. Ex: NaCl is an ionic compound. Water is a polar molecule, and is attracted to the salt. The sodium and chlorine ions are pulled into solution one by one. Dissociation-The process in which an ionic compound separates into ions as it dissolves. When an ionic compound dissolves in water, the charged ends of water molecules surround the oppositely charged ions.

5 3 WAYS TO FORM SOLUTIONS IONIZATION OF MOLECULAR COMPOUNDS
When HCl dissolves in water the hydrogen atom gets pulled away from chlorine and forms a hydronium ion.  Ionization-Neutral molecules gain or lose electrons. This is different from the previous two because it is a chemical change. The solution that results contains new substances.

6 Properties of Liquid Solutions
Only three physical properties of a solution will differ from those of its solute and solvent. They are conductivity, freezing point, and boiling point. CONDUCTIVITY When NaCl is dissolved in water, the ion are free to move. This will conduct an electric current. NaCl not dissolved will not conduct a current.

7 Properties of Liquid Solutions
FREEZING POINT AND MELTING POINT MgCl2 is used in winter to melt ice and snow. It dissociates into its ions. The structure of ice is disrupted by the ions and cannot freeze. Coolant is added to cars to raise the boiling point and prevent the car from overheating. The presence of solute particles affects how a solvent freezes. A Pure water freezes in a hexagonal pattern. B In water “salted” with MgCl2, the dissociated Mg2+ and Cl− ions disrupt the formation of ice crystals.

9 FACTORS AFFECTING RATES OF DISSOLVING
Like rates of chemical reactions, rates of dissolving depend on the frequency and energy of collisions that occur between very small particles. Factors that affect the rate of dissolving include surface area, stirring, and temperature.

10 Surface Area When a sugar cube dissolves in water, the dissolving takes place at the surfaces of the cube. The greater the surface area of a solid solute, the more frequent the collisions are between solute and solvent particles. More collisions result in a faster rate of dissolving

11 Stirring Stirring moves dissolved particles away from the surface of the solid, and allows for more collisions between solute and solvent particles. Stirring will make it dissolve faster. The rate of dissolving can be increased by reducing the particle size of the solute, by stirring, and by heating the solvent.

12 Temperature Increasing the temperature of a solvent causes its particles to move faster, on average. As a result, both the number of collisions and the energy of these collisions with solute particles increase. The solute goes into solution more quickly. Increase in temp. will speed up the rate of dissolving.

14 3 Ways Solutions are Classified
Solutions are described as saturated, unsaturated, or supersaturated, depending on the amount of solute in solution. Saturated Solutions - contains as much solute as the solvent can hold at a given temperature The solvent is “filled” with solute. If you add more solute, it will not dissolve.

15 3 Ways Solutions are Classified
Unsaturated Solution - A solution that has less than the maximum amount of solute that can be dissolved Supersaturated Solution is one that contains more solute than it can normally hold at a given temperature. Supersaturated solutions are very unstable. If even a tiny crystal of the solute falls into a supersaturated solution, the extra solute can rapidly deposit out of solution If you heat a solvent up, more solute may dissolve. Then you then carefully cool the solvent back without jarring it, you may be able to keep the extra solute in solution. In the photo sequence, a single crystal of sodium acetate, NaC2H3O2, is added to a supersaturated solution of sodium acetate in water. The excess solute rapidly crystallizes out of the solution.

16 Factors Affecting Solubility
Three factors that affect the solubility of a solute are the polarity of the solvent, temperature, and pressure Generally, a solute is more likely to dissolve in a “like” solvent than an “unlike” solvent.

18 Temperature In general, the solubility of solids increases as the solvent temperature increases When a glass of cold water warms up to room temperature, bubbles form on the inside of the glass. These bubbles are gases that were dissolved in the water. They come out of the solution as the water temperature rises. Unlike most solids, gases usually become less soluble as the temperature of the solvent increases.

19 Pressure Increasing the pressure on a gas increases its solubility in a liquid. The pressure of CO2 in a sealed 12-ounce can of soda at room temperature can be two to three times atmospheric pressure

21 8.3 Properties of Acids and Bases
Identifying Acids Acid- a compound that produces hydronium ions (H3O+) when dissolved in water.

24 Identifying Bases Base- a compound that produces hydroxide ions (OH-) when dissolved in water. 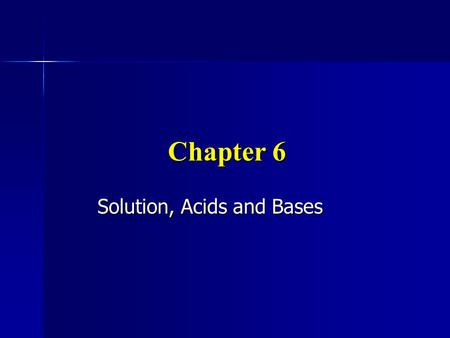 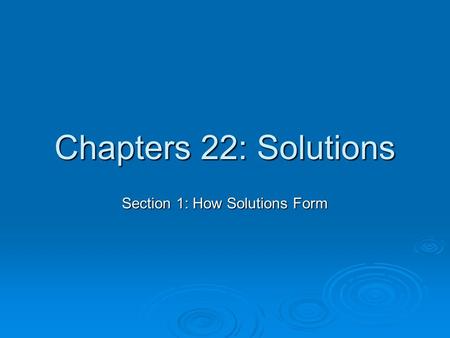 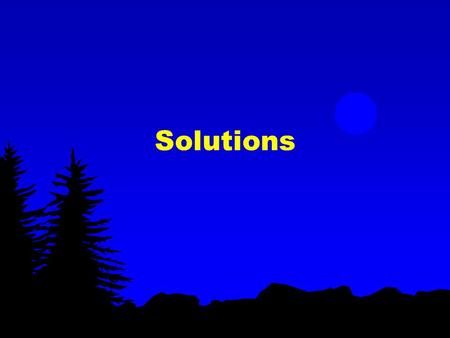 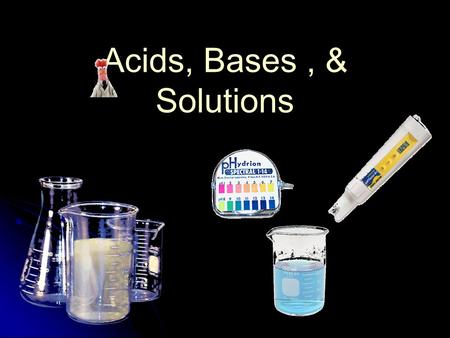 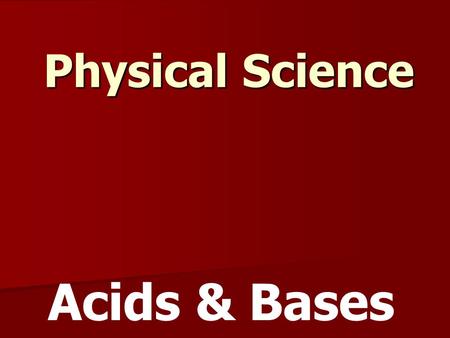 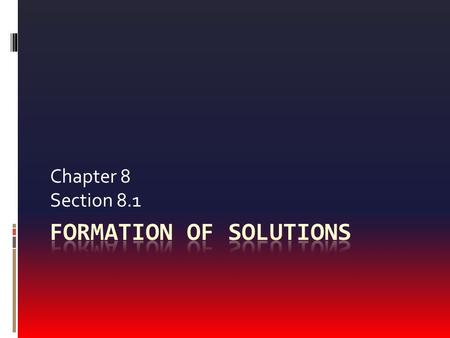 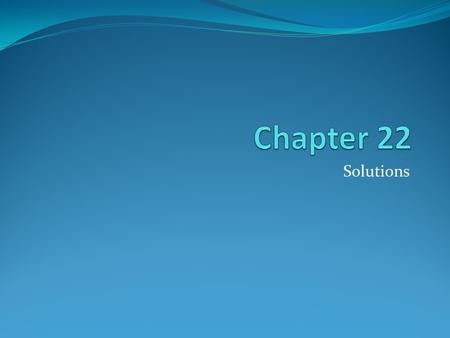 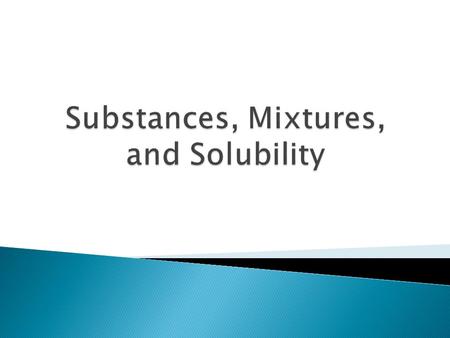  Substances are composed of atoms and elements  Substance is matter that has the same fixed composition, can’t be broken down by physical processes. 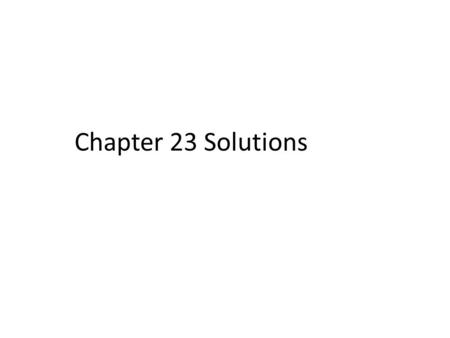 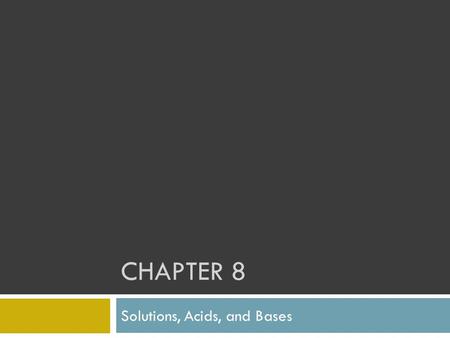 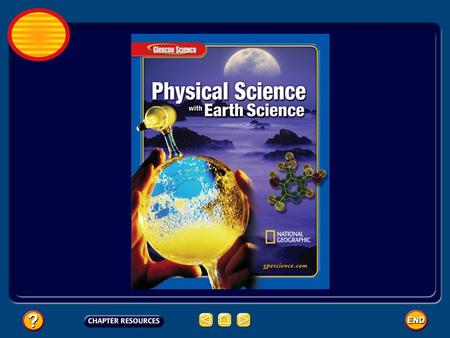 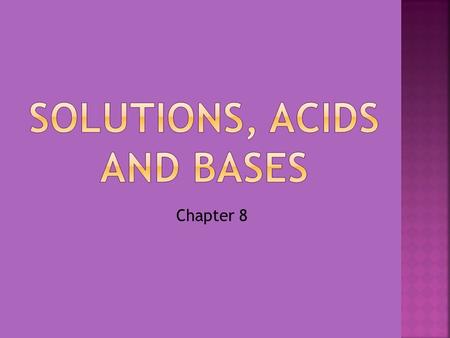 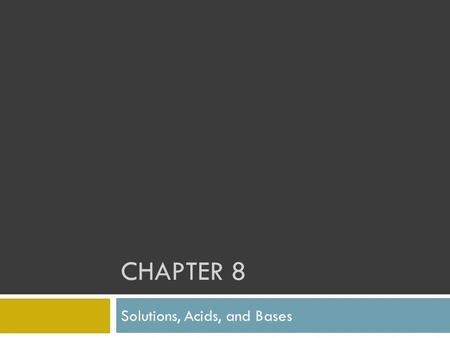 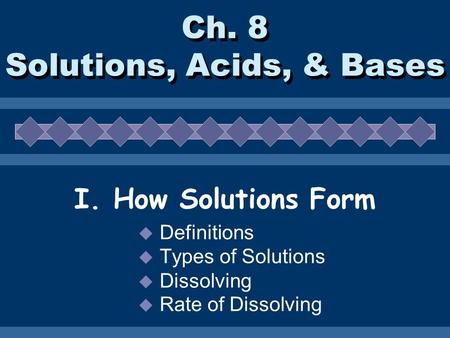 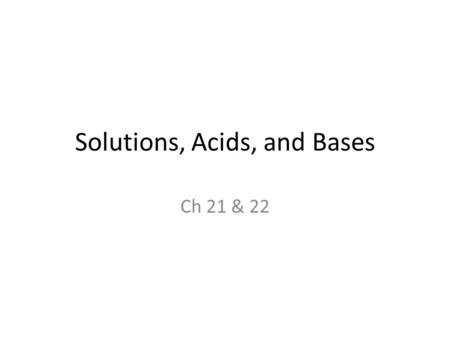 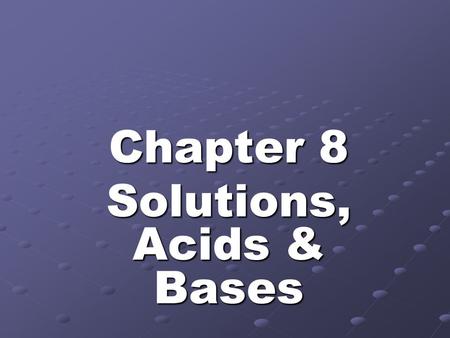 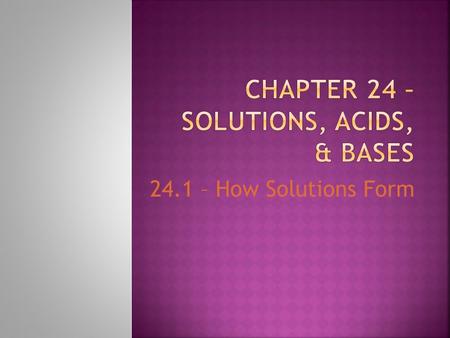 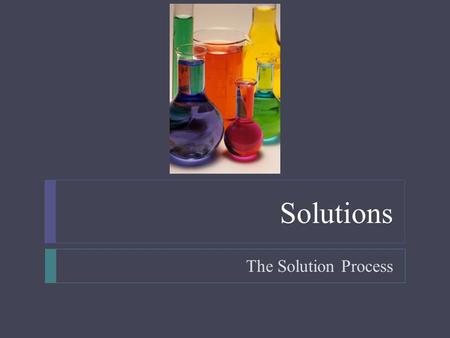 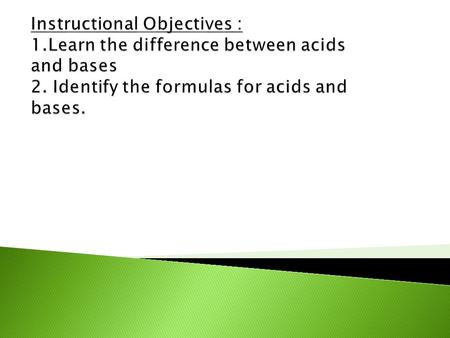