Presentation on theme: "Poetry Terms. Elements of Poetry Figurative language: language that is used imaginatively, rather than literally, to express ideas or feelings in new."— Presentation transcript:

2 Elements of Poetry Figurative language: language that is used imaginatively, rather than literally, to express ideas or feelings in new ways. These figure of speech make comparisons between dissimilar things: Similes use like or as to compare 2 essentially unlike things, as in “She runs like the wind”. Metaphors speak of one thing in terms of another, as in “All the world’s a stage.” Personification gives human traits to nonhuman things, as in “The ocean snarled and pounded against the shore”

5 Poets use graphic elements to help readers to understand the poem and to strengthen the sound or visual appeal of the poem. Punctuation marks such as commas show the reader where to slow down or pause Line length can help determine whether a poem has a flowing sound or a short, choppy sound. Word position can show relationships between words and ideas.

6 Types of Poetry Narrative poems tells a story with a plot, characters, and a setting. An epic is a long narrative poem about the feats of gods or heroes. A ballard is a songlike narrative with stanzas and a refrain

7 Types continued Dramatic poetry tells a story using a character’s own thoughts or spoken statements. Lyric poems express the feelings of a single speaker. Lyrics are the most common type of poem in modern literature.

8 Poems can also be categorized by structure, or form.Poetic structures are defined by patterns of line and stanza length, rhythm, and rhyme. A haiku is a verse form with 3 unrhymed lines of five, seven, and five syllables. Tanka is a verse form with 5 unrhymed lines of 5, 7, 5, 7, and 7 syllables. Both forms use imagery to convey a single vivid emotion. Some poems, described as free verse, have neither a set pattern of rhythm nor rhyme. A sonnet is a 14-line lyric poem with formal patterns of rhyme, rhythm, and line structure.

Download ppt "Poetry Terms. Elements of Poetry Figurative language: language that is used imaginatively, rather than literally, to express ideas or feelings in new." 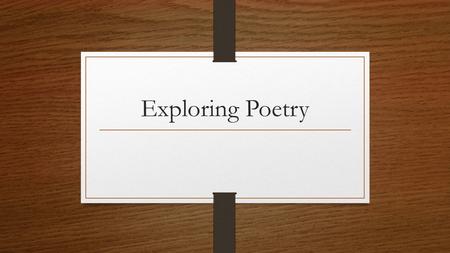