3 Figurative Language Language that is used imaginatively, rather than literally, to express ideas or feelings in new ways.

4 Figures of Speech Similes: compares one thing to another and uses the words “like” or “as.” Metaphors: an implied comparison made between two unlike things. Personification: giving human traits (qualities, feelings, action, or characteristics) to non-human objects.

5 Allusion: an allusion is the casual reference to a figure or event in history or literature that creates a mental image in the mind of the reader. Symbolism: the use of one object (a symbol) to represent or suggest something else.

6 Imagery: Descriptive language that creates vivid impressions
Imagery: Descriptive language that creates vivid impressions. These impressions, or images, are developed through sensory language, which provides details related to sight, sound, taste, touch, smell, and movement. Theme: the message of the poem Tone: the manner in which a poet makes his statement; it reflects his attitude toward his subject. The reader must learn to "hear" their tones with his mind's ear.

9 Types of Poetry Narrative poetry tells a story with a plot, characters, and a setting. Carpe diem is a Latin expression that means "seize the day." Carpe diem poems have the theme of living for today. Epic is a long narrative poem about the feats of gods or heroes. Ballad is a songlike narrative with stanzas and a refrain.

11 Poetic Structure Poems can also be categorized by structure, or form. Poetic structures are defined by patterns of line and stanza length, rhythm, and rhyme. Some examples are: Haiku is a verse form with three unrhymed lines of five, seven, and five syllables. Free verse poems have neither a set pattern of rhythm or rhyme. Acrostic Poem tells about the word. It uses the letters of the word for the first letter of each line.

12 Analyzing Poetry Analysis means literally picking a poem apart - looking at elements such as imagery,symbolism, allusion, metaphor, poetic language, rhyme scheme, and so on - in order to see how they all work together to produce the poem's meaning. Annotating is a great way to begin analyzing a poem. 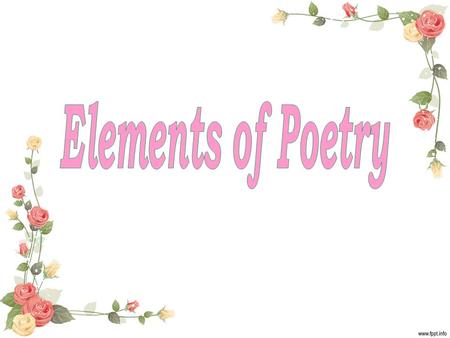 Poetry Defined Poetry is literature in verse form, a controlled arrangement of lines and stanzas. Poems use concise, musical, and emotionally charged.