2 PBS Special Video A reading by Ted Kooser , “Daddy Long Legs” Listen to the way he reads his own poem; note the musicality to his tone…could this be set to music?

3 By definition… Poetry is one of the three major genres, or forms, of literature, along with prose and drama. Poetry usually contains concise, musical language that differs from that of everyday speech. A poem is often arranged in lines and groups of lines that form stanzas.

4 Sound devices are resources used by poets to convey and create the meaning or experience of poetry through the use of sound.

6 Sound Devices -End rhyme: a rhyme that occurs in the last syllables of verses, as in stanza one of Robert Frost’s “Stopping by Woods on a Snowy Evening”: Whose woods these are I think I know, His house is in the village, though; He will not see me stopping here To watch his woods fill up with snow.

7 Figurative Language is a technique used to create strong images; conveys meaning beyond the literal meanings of words.

8 Figurative Language Simile: two seemingly unlike things are compared using like or as. Payday loans are like a blight on one’s financial soul. Metaphor: directly compares two unlike objects. During the day, it was a thunderous surge of cars, a great insect rustling. Personification: animals, inanimate objects, or ideas are given human qualities. The wind howled its disapproval as we opened the front door. Synecdoche: a part of something substituted for the whole. Romeo, give me thy heart and we shall enjoy our love.

9 Figurative Language Understatement - refers to the intentional downplaying of a situation's significance, often for ironic or humorous effect.  Hyperbole- overstatement (ex) I have told you a million times! Irony- a situation, or a use of language, involving some kind of difference. (ex) ''Water, water everywhere but ne'er a drop to drink'. Imagery- draws the reader into poetic experiences by touching on the images and senses which the reader already knows.

10 Figurative Language Symbolism - an image which suggests or represents something other than itself. In poetry, a symbol represents both what it is, and additionally, a concept or an idea. Paradox- a statement or situation containing apparently contradictory or incompatible elements.

11 Poetic Form is the structure of he poem itself; the rhyme scheme, meter and other elements. In poetry, this refers to the shape or structure without regards (necessarily) to content.

12 Poetic Forms 1.) Sonnet -English (or Shakespearean) sonnets are lyric poems that are 14 lines long falling into three coordinate quatrains and a concluding couplet. Italian (or Petrarchan) sonnets are divided into two quatrains and a six-line sestet. 2.) Fixed: A form of poetry in which the length and pattern are prescribed by previous usage or tradition, such as a sonnet. 3.) Prose the ordinary form of spoken or written language, without metrical structure, as distinguished from poetry or verse 4.) Ballad : tells a story similar to a folk tale or legend and often has a repeated refrain (repeated part).

13 Types of poetry 1.) Lyric Poetry -expresses the thoughts and feelings of the poet. The term lyric is now generally referred to as the words to a song. 2.) Narrative Poetry-Ballads and epics are different kinds of narrative poems. Tells a story. 3.) Dramatic Poetry- uses the techniques of drama to present the speech of one or more characters 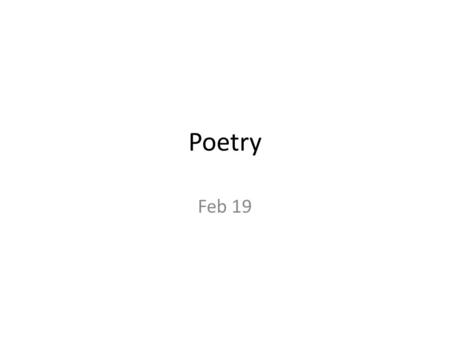