Presentation on theme: "P OETRY N OTES Part 2. T HE POET IS … The one writing the story."— Presentation transcript:

3 T HE SPEAKER IS … The one telling the story in the poem.

5 L INE Lines can be of varying length. Some can be long, others can be short. Some poems have the same line lengths. Others have an assortment of line lengths. Syllables Meter

6 S TANZA A group of lines put together by a single thought. A stanza is like a paragraph in prose.

8 S OUND E FFECTS Rhythm: The beat of the poem. Rhythm is dictated through line lengths, punctuation, and syllables Meter: Is the regular pattern of stressed and unstressed syllables Foot: A foot is a basic unit of a meter.

9 T YPES OF F EET Iambic: A foot consisting of two syllables where the first is short or unstressed and the second is long or stressed e.g. as in 'beSIDE'. Rhyme: when words or phrases have similar sounds End Rhyme: when words at end of lines rhyme Internal Rhyme: when words within a line rhyme Near Rhyme: Term used to describe a number of devices which come close to full rhyme but don't create the perfect chiming sound associated with words such as 'cat' and 'mat'. These devices include: assonance, consonance, half-rhyme and unaccented rhyme. Rhyme Scheme: The pattern of how the ends of lines rhyme.

10 L ITERARY D EVICES Onomatopoeia: The use of words that imitate the sound that the poet is trying to describe. Pow, Plop, Boom Alliteration: the repetition of consonant sounds at the beginning of a word Consonance: The effect created when words share the same stressed consonant sounds but where the vowels differ. Assonance: The repetition of vowel sounds in the middle of words Refrain: A line or phrase that recurs throughout a poem - especially at the end of stanzas

12 Hyperbole: an extreme exaggeration Litotes: Ironic understatement Understatement: opposite of a hyperbole. When you do not say the statement with its full intensity Idiom: an expression whose meaning is not predictable from the usual meanings of its constituent elements, as kick the bucket or hang one's headexpression Personification: giving inanimate objects human qualities Symbolism: an object or word that have a literal and figurative meaning. Ex: A light bulb: Literally is a light bulb but figuratively stands for ideas. Allusion: a reference to something in literature, art, or history. Imagery: when the author gives the reader a mental picture through sensory details.

13 T YPES OF P OETRY Sonnet: a 14 line poem written in iambic pentameter that rhymes Narrative Poem: a long poem that tells a complete story Epic: a narrative poem that is typically about Ballad: can range from a simple song to a narrative. Ballad stanzas are made of a quatrain that have the 2 nd and 4 th line rhyming

Download ppt "P OETRY N OTES Part 2. T HE POET IS … The one writing the story." 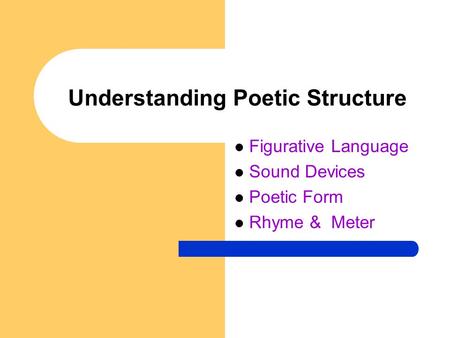 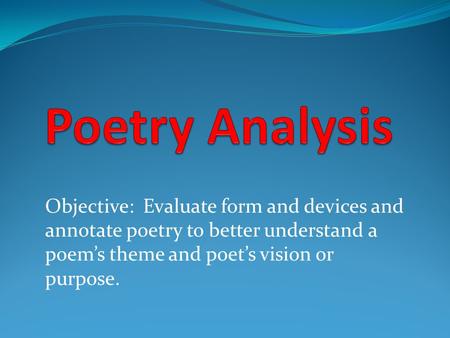