7 The Octet Rule: Noble gases are unreactive Noble gases are stable In 1916, Gilbert Lewis used this fact to explain why atoms form certain kinds of ions and molecules. In forming compounds, atoms tend to achieve the electron configuration of a noble gas. An octet is a set of eight electrons. All noble gases except Helium have an octet of valence electrons Metallic elements tend to lose their valence electrons, leaving a complete octet in the next lowest energy level. Nonmetals tend to gain or share electrons with other nonmetals to achieve a complete octet.

8 Formation of Cations: A neutral atom has the same number of protons and neutrons. An ion forms when an atom in a group loses or gains a certain number of electrons. A cation is produced when atoms lose valence electrons. Cations are positively charged atoms The electron configuration of the cation resembles that of the previous noble gas For transition metals, the charges of cations can vary. An atom of Fe can lose two or even three electrons Fe2+ Fe3+ Notice the charge is written as a superscript Some ions formed by transition metals do not have noble-gas electron configuration. Transition metals tend to borrow an electron from their s orbital so that the d orbitals are filled giving theses elements a pseudo noble-gas configuration Examples – Ag, Cu, Au, Cd, and Hg

9 Formation of Anions: An anion is an atom from a group that has a negative charge. The negative charge on the atoms occurs because the atom gains electrons. The name of an anion typically ends with an –ide For example Chlorine becomes Chloride By gaining electron the atoms attain noble-gas electron configuration Halogens – form halide ions and have a 1- charge

10 7.2 Ionic Bonds and Ionic Compounds
Key Concepts What is the electrical charge of an ionic compound? What are three properties of ionic compounds?

11 Formation of Ionic Compounds
Compounds composed of cations and anions are called ionic compounds. Ionic compounds usually form from metallic cations and nonmetal anions. Ionic compounds are electrically neutral. The total positive charge of the actions equal the total negative charge of the anions The charge is called the atoms oxidation number The oxidation number is written as a superscript Na Cl is an ionic compound –what are there charges? Try these Mg + F , Ca + O , K + N Ionic bonds are held together by electrostatic forces The bond is created when the cation loses its electron(s) to and anion Each atom in the bond becomes charged and both have stable octets.

12 Formula Units Chemical Formula – is a shorthand way to represent the kinds and numbers of atoms in the compound Formula unit – is the lowest whole-number ratio of ions in an ionic compound. Superscript – charge or oxidation number Subscript – the amount of the atoms present in the compound So what is the ratio of a Magnesium Chloride compound? Notice – the cation is first in the name and anion is second with an –ide at the end of the name. Two atom compounds are called binary compounds.

13 Properties of Ionic Compounds
Most ionic compounds are crystalline solids at room temperature. The ions in such crystals are arranged in repeating three-dimensional patterns. In sucha a way, ionic compounds create strong attractive forces between the ions resulting in very stable structures. Ionic compounds generally have high melting points Coordination number – is the number of ions of opposite charge that surround the ion in a crystal. Ionic compounds can conduct an electrical current when melted or dissolved in water.

14 7.3 Bonding in Metals Key Concepts: How can you model the valence electrons of metal atoms? How are metal atoms arranged? Why are alloys important?

15 Metallic Bonds and Metallic Properties
1. Metals are made of closely packed cations rather than neutral atoms. 2. The valence electrons of metal atoms can be modeled as a sea of electrons. 3. The valence electrons are mobile and can drift freely in the metal 4. Metallic bonds – Consist of the attraction of the free-floating valence electrons for the positively charged metal ions. 5. The sea-of-electrons explain many physical properties of metals a. good conductors b. ductile c. malleable

17 Alloys Very few objects are pure metals Most metals are alloys Alloys – are mixtures of two or more elements with at least one element being a metal. Brass – is an alloy of copper and zinc Alloys are important because their properties are often superior to those of their componetn elements. Sterling silver – 92.5% silver and 7.5% copper Bronze – 7 parts copper 1 part tin Nonferrous alloys – commonly used to make coins – bronze, copper nickel, aluminum Steel – is one of the most important alloys Principle elements in steel are – Fe, C, B, Cr, Mn, Mo, Ni, W, V Substantial alloys – alloys that form their component atoms in different ways because the atoms are about the same size and have the ability of replacing each other. Interstitial alloy – atoms squeeze in between atoms 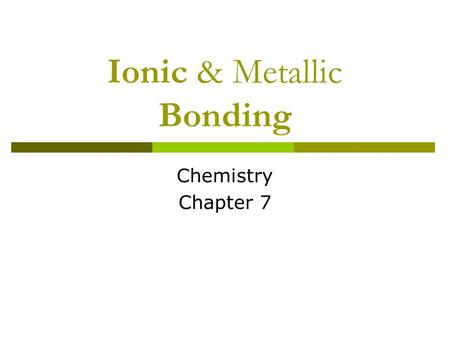