12 Electron Dots For Anions
Nonmetals will have many valence .electrons. They will gain electrons to fill outer shell. P P3-

18 Polyatomic ions Groups of atoms that stick together as a unit, and have a charge PO43- phosphate CO32- carbonate C2H3O41- acetate Names often end in –ate or –ite More later

19 Ionic Bonding Anions and cations are held together by opposite charges. This is the bond Ionic compounds are called salts. Simplest ratio is called the formula unit. The bond is formed through the transfer of electrons. Electrons are transferred to achieve noble gas configuration.

21 Ionic Bonding All the electrons must be accounted for! Ca P

36 Properties of Ionic Compounds
Crystalline structure. A regular repeating arrangement of ions in the solid. Ions are strongly bonded. Structure is rigid. High melting points- because of strong forces between ions.

38 Do they Conduct? Conducting electricity is allowing charges to move.
In a solid, the ions are locked in place. Ionic solids are insulators. When melted, the ions can move around. Melted ionic compounds conduct. First get them to 800ºC. Dissolved in water they conduct.

40 Metallic Bonds How atoms are held together in the solid.
Metals hold onto their valence electrons very weakly. Think of them as positive ions floating in a sea of electrons.

41 Sea of Electrons + Electrons are free to move through the solid.
Metals conduct electricity. +

47 Alloys Solutions made by dissolving metal into other elements- usually metals. Melt them together and cool them. If the atoms of the metals are about the same size, they substitute for each other Called a substitutional alloy

51 Alloys Making an alloy is still just a mixture Blend the properties
Still held together with metallic bonding Most of the metals we use daily are alloys. Designed for a purpose

52 Crystal Structures The repeating unit is called the unit cell 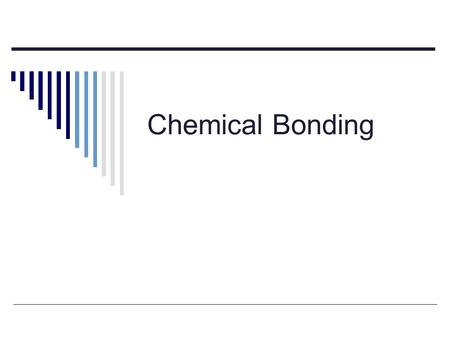