2 Section Ions When Mendeleev arranged his periodic table according to properties, he didn’t know that it was also due to the number of bonding electrons The reason that certain elements were grouped together was because they have the same number of valence electrons Valence Electrons – electrons in the highest occupied energy level of an atom To find the valence electrons in an atom of the representative element, simply look at the group number

4 Determine the Valence electrons in each of these elements
K Be P Li C He O 9. Ne N B

8 Satisfying the Octet Rule
In forming compounds, atoms want to achieve a noble gas configuration In order for atoms to combine together to obtain 8 valence electrons, they transfer electrons (either gain or lose electrons)

14 Charges on the Periodic Table

17 Example… Sodium Chloride (Salt, NaCl) is an example of an ionic compound

19 Ionic Charges Although they are composed of positive and negative charges, ionic compounds are overall electrically neutral because their charges will cancel out For example… Na+1 will bond with Cl-1 Mg2+ will bond with O2- Al3+ will bond with N3- Two K+1 can also bond with One S2-

20 Writing Chemical Formulas
Al2S3 The numbers on top are the charges, while the numbers on the bottom tell how many atoms there are

23 Ionic Bonding When cations and anions transfer electrons, a SALT is formed Draw the electron dot structure for the following atoms Li and Br Mg and O Two K and One S One Sr and Two F

24 SALTS When cations and anions form bonds with each other they are called SALTS Example: Li 1s 2p F Li+ LiF F-

32 Alloys Very few of the metal objects you use everyday are pure metals
Alloys are a mixture of two or more elements, at least one being a metal Alloys are important because the combination of metals are stronger than the single metal by itself 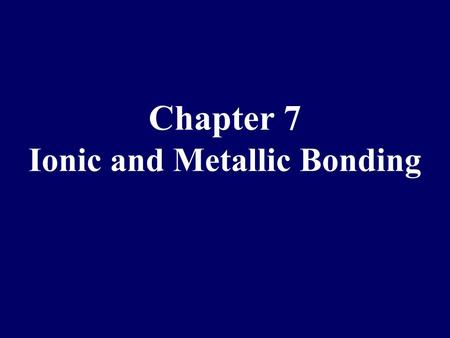