As we wait for class to start, please sign in for today’s attendance tracking: Text to 37607: DILBERT netID Go online to AEM 4550 class website Click on.

Presentation on theme: "As we wait for class to start, please sign in for today’s attendance tracking: Text to 37607: DILBERT netID Go online to AEM 4550 class website Click on."— Presentation transcript:

1 As we wait for class to start, please sign in for today’s attendance tracking: Text to 37607: DILBERT netID Go online to AEM 4550 class website Click on “attendance tracking” – in green font Submit your netID or

4 Television Sells Spots Like Airlines Sell Seats  If a flight leaves with empty seats, revenue for the seat is zero.  To assure full planes, sell the seats at a price that will sell them out early.  Charge last -minute buyers highest price

6 2. SCATTER MARKET Sale of most of the year’s remaining inventory not sold at upfront. Inventory generally tight. Prices usually 50% higher than upfront.

7 3. OPPORTUNISTIC MARKET Last-minute buying of inventory due to: Changes in programming Advertisers don’t want to be on controversial programs Advertiser inability to pay

8 Cancellations and Guarantees  Most network orders are non-cancelable. If an advertiser cannot or does not want the time, it is the advertiser’s responsibility to sell the time - not the network’s.  Networks cancel programs with no notice to the advertiser with the provision that commercials will run in another program that delivers the same audience profile.

9 Ratings Guarantees  The cost of network time is based on network guarantees of spot price vs. audiences, computed in cost per thousand.  If the ratings projected by the network to the advertiser are not achieved, the network runs the spot in other programs to accumulate sufficient ratings to bring the CPM down to the promised level.  The extra spots the advertiser gets are called MAKEGOODS

10 Ratings Guarantees  Networks are incentivized to give a slightly inflated estimate than to low-ball it and outperform (additional GRPs are free for advertisers).  Networks aim to estimate ratings of new shows within 5% of what they will deliver (and usually on average they achieve that).  Otherwise a lot of inventory will need to be given back as makegoods.  Predictions are based on last year’s performances among other things.  Examples:  2013 Baseball World Series resulted in makegoods.  Some makegoods can be transferred to HULU

16 DVRs and ad avoidance  DVRs may increase commercial avoidance, BUT:  Facilitate the measurement of commercial avoidance  Advertisers can use ad avoidance data to improve creative strategies, targeting, message rotation and scheduling, media buying, and ROI (return on investment) measurements  The very act of fast-forwarding requires that the viewer pays attention  Alternatives: viewers getting up to go to the fridge or the bathroom or turning away to the computer or to talk to someone else in the room or flipping the remote around the channels  There can be a real effect on purchasing behavior due to the attention required

18 Advertisers Adapting  Advertisers can use information gathered from DVRs to figure out how to combat fast-forwarding  Target niche audiences to tailor more effective advertising  TiVo’s Stop||Watch is tracking second-by-second viewing among all users and 20,000 DVR users with demographic data known  Networks adopt to fast-forwarded commercials by:  Further integrating products into programming – product placement  Tricking viewers by changing the length of commercials  Integrating Tune-ins for the show that is being watched  Downside: may annoy viewers

19 One Early Study Finds No DVR Effect  Why no DVR effect?  Advertising has small effects to start with  People do not skip many ads  People in control group zap anyhow  People attend to what they skip  Mandese (2004) finds 67% of DVR viewers notice the advertisements they forward through  Multiple ad viewing from repeat plays

25 Online Ad Formats  Floating ad: An ad which moves across the user's screen or floats above the content.  Expanding ad: An ad which changes size and which may alter the contents of the webpage.  Polite ad: A method by which a large ad will be downloaded in smaller pieces to minimize the disruption of the content being viewed.  Wallpaper ad: An ad which changes the background of the page being viewed.  Trick banner: A banner ad that looks like a dialog box with buttons. It simulates an error message or an alert.  Pop-up: A new window which opens in front of the current one, displaying an advertisement, or entire webpage.  Pop-under: Similar to a Pop-Up except that the window is loaded or sent behind the current window so that the user does not see it until they close one or more active windows.  Video ad: similar to a banner ad, except that instead of a static or animated image, actual moving video clips are displayed.  Map ad: text or graphics linked from, and appearing in or over, a location on an electronic map such as on Google Maps.  Mobile ad: an SMS text or multi-media message sent to a cell phone.

26 Search Advertising  Highly effective since it reaches people when they are interested in a topic  Relevant, yet not obtrusive  Has expanded rapidly in last few years

33 Advertising Payment Methods  CPM – Cost per Mille – an advertiser pays per one thousand impressions of the ad (“Mille” stands for “thousand” in Latin);  an alternative term used in the industry for this payment model is CPI (Cost per Impression).  CPC – Cost per Click (a.k.a. Pay per Click or PPC; we will use these terms interchangeably) – an advertiser pays only when a visitor clicks on the ad.  CPA – Cost per Action – an advertiser only pays when a certain conversion action takes place, such as a product being purchased, an advertised item was placed into a shopping cart, or a certain form being filled.  This is the best option for an advertiser to pay for the ads from the advertisers’ point of view since it gives the

34 PAY-PER-CLICK Advertising Model  Targeted advertisement based on two effectiveness measures: 1. Click-Through Rate (CTR): specifies on how many ads X, out of the total number of ads Y shown to the visitors, the visitors actually clicked; in other words, CTR = X/Y. CTR measures how often visitors click on the ad 2. Conversion Rate: it specifies the percentage of visitors who took the conversion action. Conversion rate gives a sense of how often visitors actually act on a given ad, which is a better measure of ad’s effectiveness than the CTR measure

35 Recent History of CPC Method  Cost Per Click is the predominant advertising payment method, made popular by search engines such a Google and Overture (now part of Yahoo!).  Google introduced CPC AdWords program in 2002.  Combining a particular ad payment method with a particular targeting method. For Google and Yahoo! the two main models are the keyword-based PPC and the content-based PPC models.

36 Cost Per Click Two problems with the Cost per click model:  Although correlated, good click-through rates are still not indicative of good conversion rates  It does not offer any “built in” fundamental protection mechanisms against the click fraud 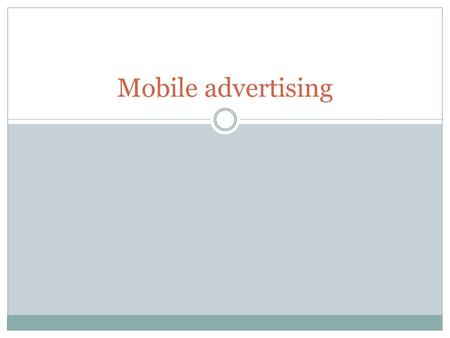 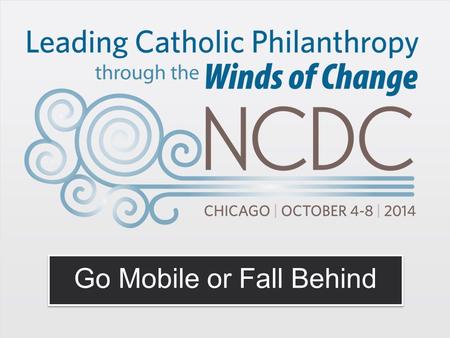 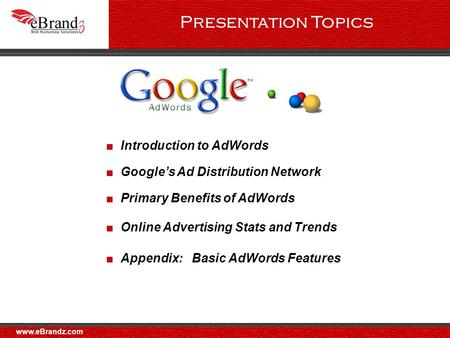 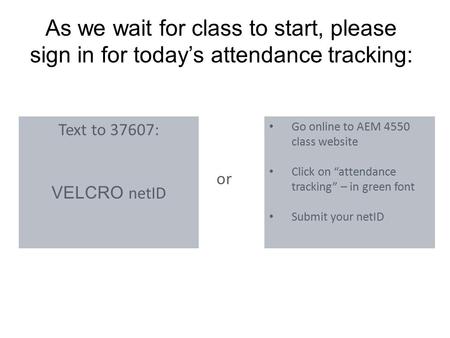 As we wait for class to start, please sign in for today’s attendance tracking: Text to 37607: VELCRO netID Go online to AEM 4550 class website Click on. 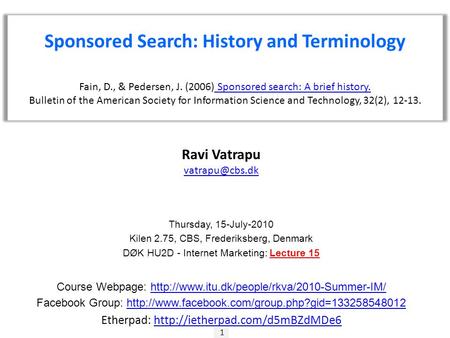 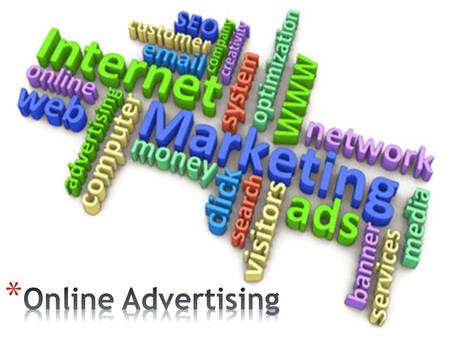 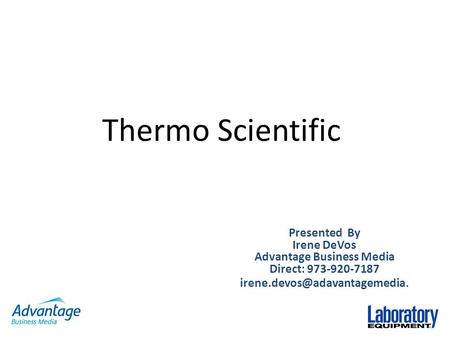 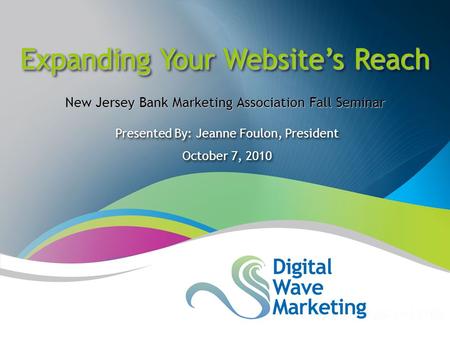 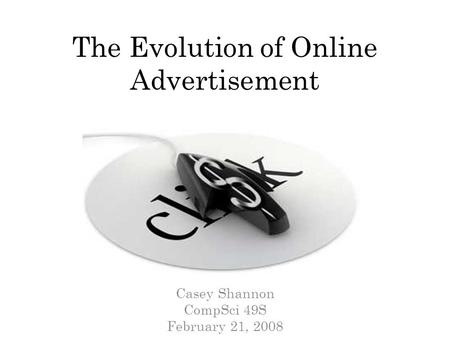 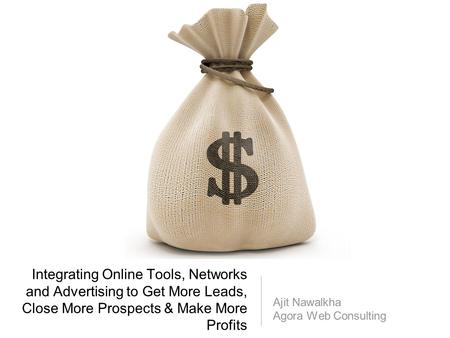 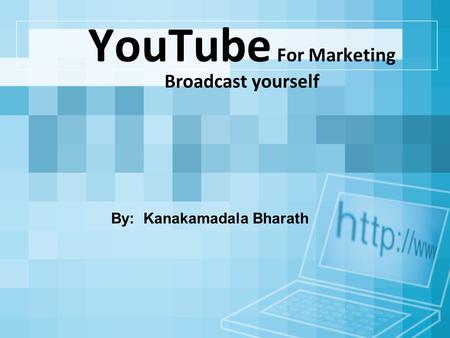 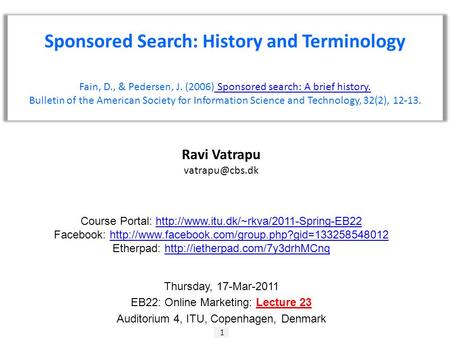 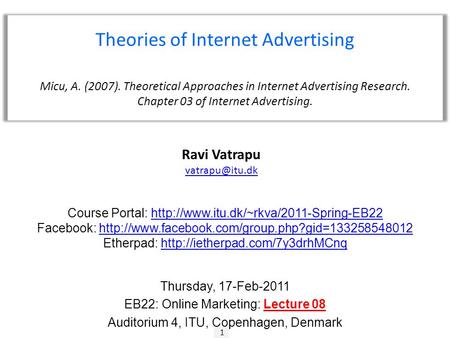 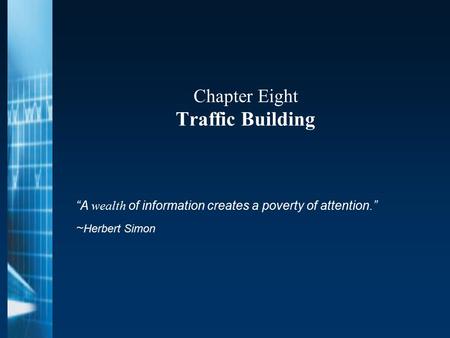 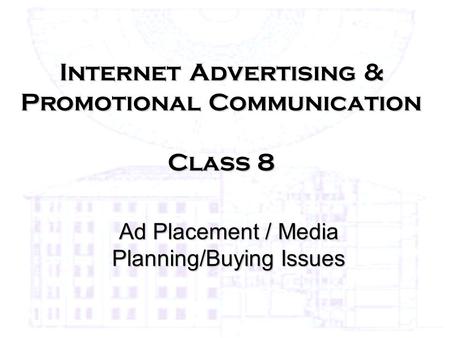 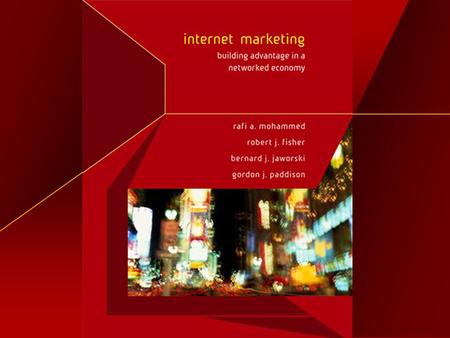 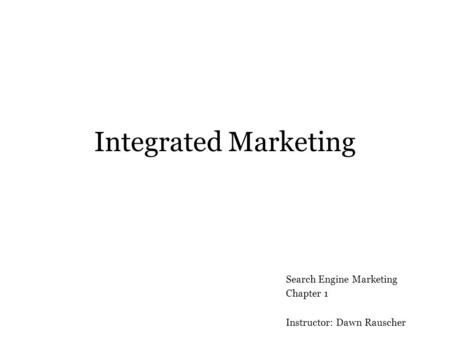 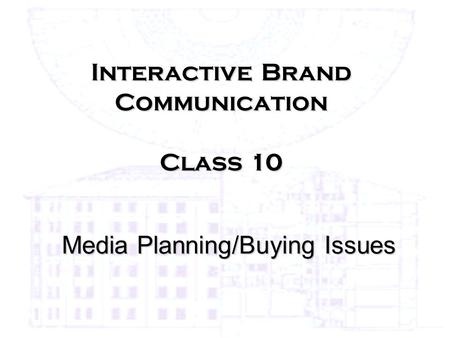 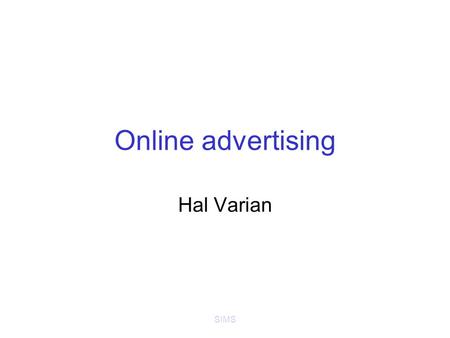 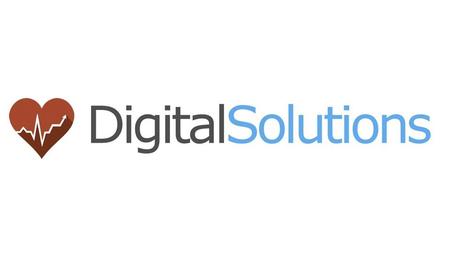