2 What is an…. Amniocentesis: the process of withdrawing a sample of the amniotic fluid surrounding the unborn baby Chorionic Villi sampling: a prenatal test that uses a sample of the tissue from the membrane that encases the fetus to check for specific birth defects. Samples of the tissue are cut or suctioned off and analyzed

3 Cerebral Palsy Definition: General term for a variety of problems of the motor system. Symptoms can include lack of coordination, stiffness, difficulty with speech and paralysis Causes: causes vary but include damage to the brain before, during or shortly after birth. Detections: motor skills are typically slow to develop during 1st year of life Treatments: damage to brain is irreversible. Physical and speech therapy, surgery and medication can often lessen effects

4 Cleft Lip & Cleft Palate
Definition: a gap in the upper lip or palate (roof of the mouth) that causes problems with eating, swallowing, speech and appearance Causes: may be caused by heredity, environmental factors or both Detections: conditions are apparent at birth. Often detectable by ultra sound before birth Treatments: surgery corrects the gap and helps eliminate the problems associated with it

8 Down Syndrome Definition: a group of problems that may include mental retardation; heart, blood and digestive system difficulties and poor muscle ton Cause: the presence of an extra chromosome 21 Detections: can be detected in a fetus by amniocentesis or chorionic villi sampling, or after birth with a blood test Treatment: no know cure. Treatments include therapies, special educational assistance, and in some cases, corrective surgery

9 Muscular Dystrophy Definition: there are many different types; all involve a progressive weakness and shrinking of the muscles. Most common form begins between ages 2-6 Cause: most types are hereditary. Most common for is transmitted by female carriers of the gene but affects only males Detections: recognizable one symptoms appear. Genetic counseling can ID carriers Treatment: no know cure. Physical therapy can minimize the disabilities

11 PKU (phenylketonuria)
Definition: condition in which the body is unable to process and use a specific protein present in nearly all foods. Brain damage and mental retardation can result. Causes: defective recessive genes inherited from both parents Detections: newborns are tested for PKU, as required by law in all states Treatments: no know cure. If diagnosed early, a special diet can reduce or prevent brain damage

13 Sickle Cell Anemia Definition: malformed red blood cells interfere with the supply of oxygen to all parts of the body. Symptoms include tiredness, lack of appetite and pain. Can lead to early death. Causes: defective recessive gene inherited from both parents. Most common in African-Americans Detections: genetic counseling can ID parents who carry the gene. Amniocentesis or chorionic villi sampling can ID in a fetus. Blood tests detect it after birth. Treatments: no know cure. Medications can help treat symptoms

15 Spina Bifida and Hydrocephalus
Causes: seems to be a combo of heredity and environmental factors. Taking a folic acid supplement during pregnancy may reduce incident. Detections: spina bifida is apparent at birth. Hydrocephalus is indicated by overly rapid growth of the head. Tests of mom’s blood, amniocentesis, and ultrasound can reveal suspected cases in fetus Treatment: corrective surgery, physical therapy and special schooling can minimize disabilities caused by spina bifida. Hydrocephalus can be helped by surgically implanting a shunt that relieves fluid build up Definition: in spina bifida, an incompletely formed spinal cord may lead to stiff joints, partial paralysis, and problems with the kidneys and urinary tract. 70/100 children with spina bifida also have hydrocephalus, in which an excess of fluid surrounds the brain.

17 Tay-Sachs Disease Definition: caused by the lack of a specific chemical in the baby’s blood. The body cannot process and use certain fats. This leads to severe brain damage and death, usually by age 4 Causes: defective recessive gene inherited from both parents. Most common in families of eastern European Jewish descent. Detections: Amniocentesis or chorionic villi sampling can ID carriers and can test for condition after birth Treatments: no know cure. Treatments involves trying to make the child comfortable. 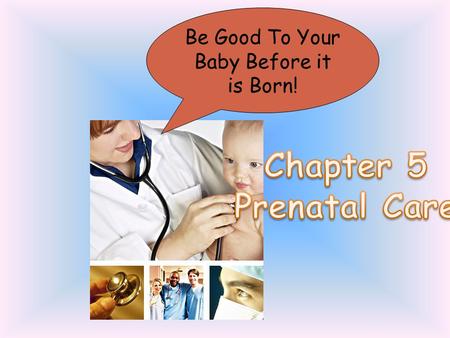 Be Good To Your Baby Before it is Born! 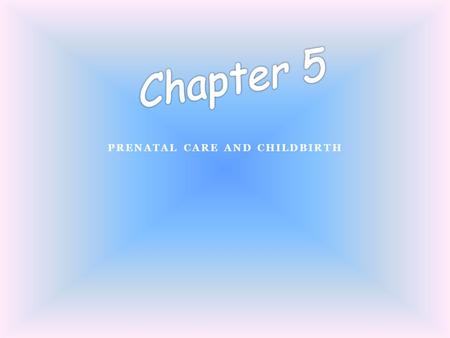 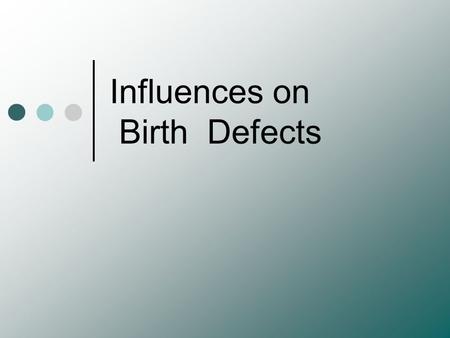 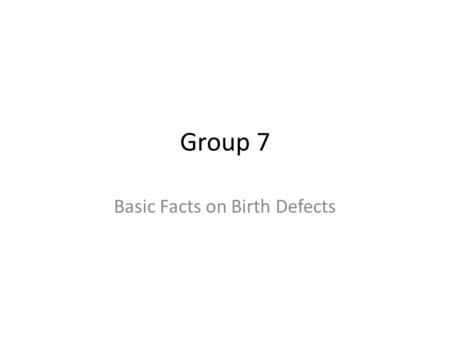 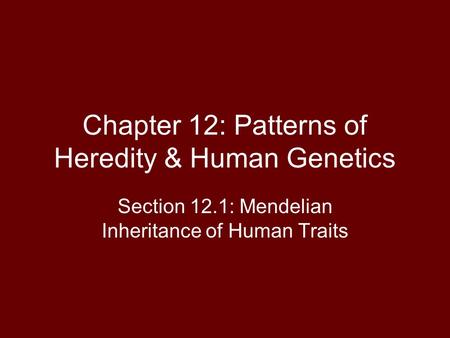 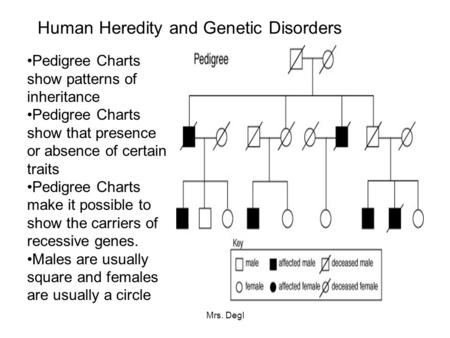 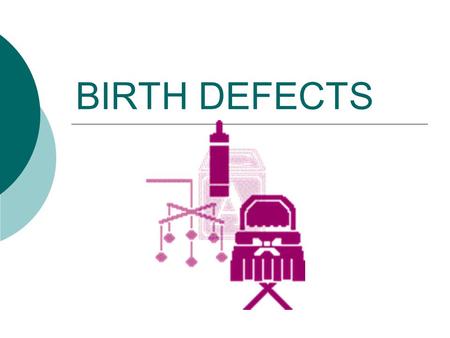 BIRTH DEFECTS. CEREBRAL PALSY The term cerebral palsy refers to any one of a number of neurological disorders that appear in infancy or early childhood. 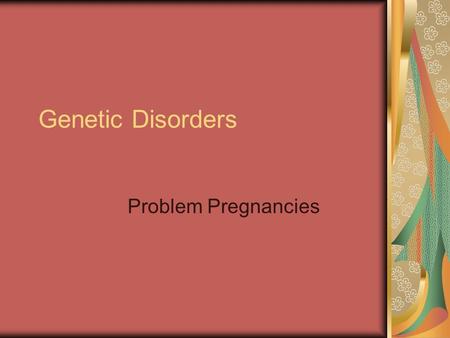 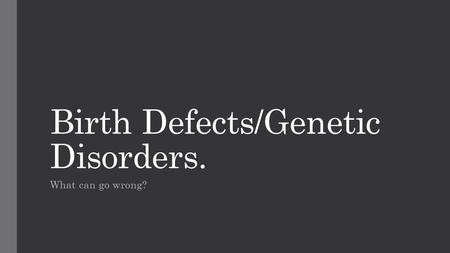 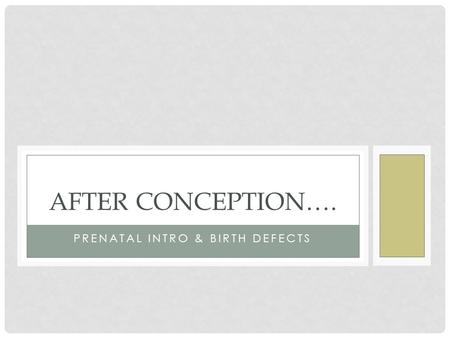 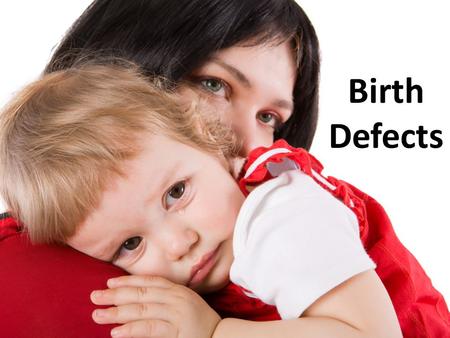 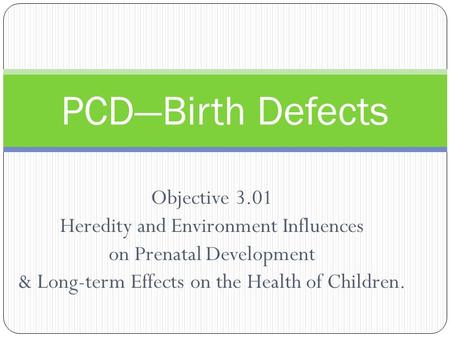 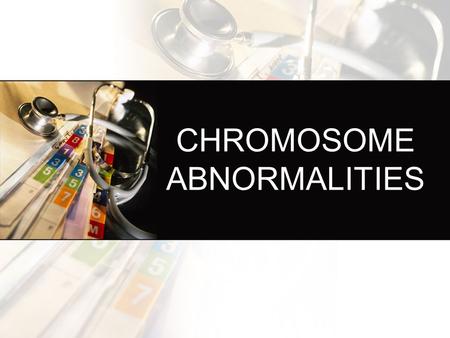 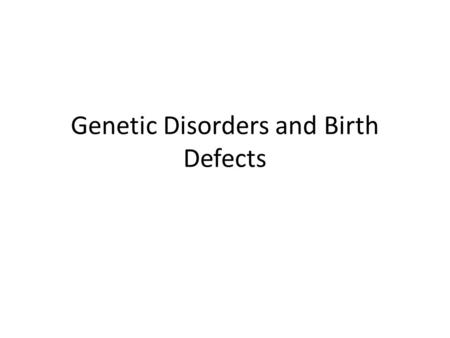