4 Viewing Guide – The American Revolution: From Colonies to Constitution 1.Who won the French and Indian War? 2.What did the French lose? 3.To prevent another war, what did King George III do? 4.What was the law called? 5.What was the colonist reaction to the Proclamation? 6.Why did the colonist believe they were independent? 7.Why did the British need so much money? 8.What was the Sugar Act? Britain Hand over all American territory Forbid settlers to go over into western frontier Proclamation of 1763 Colonist became angry British had not tried to control colonies Debt of French and Indian Wars Colonist paid a tariff (tax) on coffee, molasses, sugar, & wine

5 9.Why did the tariff upset the colonist? 10.Who was the most out spoken critique of the Act? 11.How did the British respond to the protest against the Sugar Act? 12.What new tax was placed on the colonist? 13.What products needed a stamp? 14.Who called for representatives to meet from each colony to decide how to handle the Stamp Act? 15.How many colonial representatives meet? 16.What was this meeting called? Colonists had no representatives in Parliament Samuel Adams Reduced tax by 2/3 “The Stamp Act” Paper, Almanac, official documents John Adams 9 Stamp Act Congress

9 1.What was the message carried by Paul Revere to the minutemen state? 2.Why did the British march toward Concord? 3.Who were the minutemen? 4.How many minutemen went to fight at the Lexington? 5.How many colonists died at Lexington? 6.How many minutemen (militia) will eventually come to fight the British on their trip back to Boston? 7.How many musket shots would actually hit something? British are coming Get weapons and ammunition Militia – citizen soldiers 77 8 Over 4,000 1 out 300

10 8.How many British soldiers were killed on the way to Concord and back to Boston? 9.How many people lived in the colonies at the beginning of French & Indian War? 10. How could colonists become wealthy? 11.What percent were English or of English descent? 12. Where was most slavery concentrated? 13. What crop did the colonists need slaves for? 73 2 ½ million Hard work – staying with it 70% South tobacco

12 14.What products did New England export? 15.What were beans and dry fish sold for? 16.What river valley came into conflict between the English, French, and Native Americans? 17.Who were the English colonists afraid of? 18.Who led the soldiers that started the French and Indian War? 19.What was the name of the Native American leader with Washington? Rum Slaves in West Indies Ohio French and Natives George Washington Half King

14 20.How long did the war last in America? In Europe? 21.The defeat of what city, ended the French and Indian War? 22.After the French and Indian War, how much tax per year did a colonist pay to England? 23.What was the largest city in the colonies? Second largest? 24.Who was the most important man for his ideas in the colonies? 25.What act affected all the colonists? 5 7 Quebec $1. 20 a year Philadelphia Boston James Otis Stamp Act

15 26.What colonial group wanted to be friendly with Britain? 27.How did the Sons of Liberty deal with Tories? 28.Who was the king of England during this time? 29.What did Britain do to ensure the safety of their officials? Tar and Feathers Tories King George III Sent troops

19 34. What was the first Great Battle of the American Revolution? 35. What did the American militiamen think would end the war? Bunker Hill One Big Battle 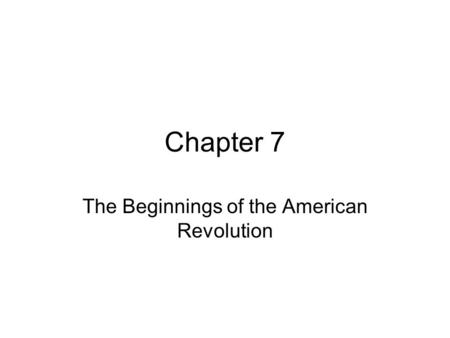