Presentation on theme: "Weather Dynamics in Earth’s Atmosphere. An atmosphere is a blanket of a gases surrounding a planet. Earth’s atmosphere has distinct layers defined by."— Presentation transcript:

2 An atmosphere is a blanket of a gases surrounding a planet. Earth’s atmosphere has distinct layers defined by changes in temperature. Most of Earth’s weather happens in the troposphere but is influenced by gas movement in the stratosphere. http://www.glacier.rice.edu/weather/3_atmstructure.html

3 What Drives Air Motion? l Warm air rises and cools as it expands. Cool air falls to fill the space left by warm air. This sets up a vertical convection current. l Particles exert a force as they move and this force per unit area is called pressure.

4 What Drives Air Motion? l If two columns of air have the same temperature, they will have the same distribution of air particles and therefore the same pressure. However, a warmer column of air will have more height. The pressure at the same altitude in a cold and warm air column will be different.

5 The columns in the first set have the same temperature and pressure at each altitude. The second set shows a cold and warm column. You have to go higher in the warm column to get the same pressure as in the cold. Therefore, the pressure is higher at the same height in the warmer air column compared to the cold. Diagram from R.S Naylor

6 Particles move from areas of high pressure to areas of lower pressure because of a pressure gradient. The moving particles exert a pressure-gradient force. In the case of cold and warm air columns, air will move from the warm to the cold column at the same height. This movement generates wind. Diagram from R.S Naylor

7 Pressure in the atmosphere This is a contour display of pressures at the surface. Blues represent lower pressures while reds indicate higher pressures.

8 Where would the winds be highest on this date?

10 Global Heating and Air Circulation l Unequal heating of the Earth causes general air circulation. As we have discovered, global regions receive more direct radiation and therefore have higher temperatures. The warmer equatorial air rises and moves toward the polar regions (cooling as it goes). The colder polar air sinks and is drawn toward the equator.

12 Global Heating and Air Circulation l The fact that the Earth rotates complicates the circulation. Free- moving objects appear to deviate from straight-line paths as the Earth spins. This deflection due to Earth’s rotation is called the Coriolis effect. The effect is greatest near the poles and non-existent at the equator.

14 Global Heating and Air Circulation l Because the Earth rotates, the air circulation develops three cells in each hemisphere. These cells redistribute heat across Earth’s surface and generate weather systems.

16 Global Winds l The three cell circulation generates global wind patterns. The general winds include polar easterlies, westerlies, northeast or southeast trade winds, and doldrums (at the equator). l Wind direction is always designated as the direction from which the wind blows.

18 High and Low Pressure Systems l When an local area of high pressure develops in Earth’s atmosphere the air moves outward from the center (high to low). The air is diverging and moves downward. l When an area of local low pressure develops, the air converges toward the lower pressure center and up.

22 Upper Atmospheric Circulation In the upper troposphere “rivers” of rapidly moving air circle the Earth. These high speed winds are referred to as jet streams. l The polar jet stream is a result of a temperature gradient at the polar front where warm tropical air meets cold polar air.

23 Upper Atmospheric Circulation l The subtropical jet stream forms when warm tropical air is moved from the equator to the poles, generating a sharp temperature gradient along the subtropical front.

24 The polar front and the two jet streams have an influence on the movement of weather systems across the globe.

25 Air masses are steered by the jet stream.

30 When Fronts Meet l When a warm front advances on a cold front, the warm air flows up and over the cold air mass. Rain occurs at the boundary as the warmer air is cooled and water vapor condenses.

32 When Fronts Meet l When a cold front advances on a warm front, it wedges under the warmer air causing the warmer air to rise and cool. Rain occurs where the fronts meet.

34 When Fronts Meet l When a faster moving cold front advances and begins to merge with a warm front an occluded front forms. This is associated with a low pressure system. Rain occurs where the fronts meet.

42 l The preceding visible and IR images came from the following site: http://www.weather.unisys.com

43 Global circulation as viewed from the South Pole

44 Climate l The climate of a location may be defined as a "composite" of the long-term prevailing weather that occurs at that location. In a sense, climate is "average weather". Climate can be measured quantitatively by calculating the long term averages of different climate elements such as temperature and rainfall.

Download ppt "Weather Dynamics in Earth’s Atmosphere. An atmosphere is a blanket of a gases surrounding a planet. Earth’s atmosphere has distinct layers defined by." 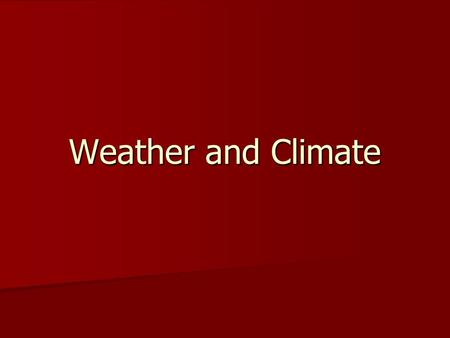 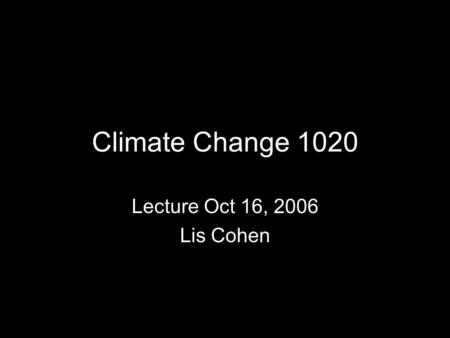 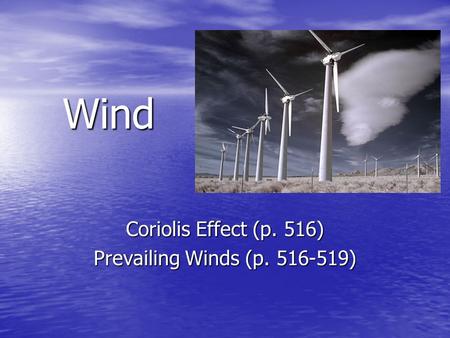 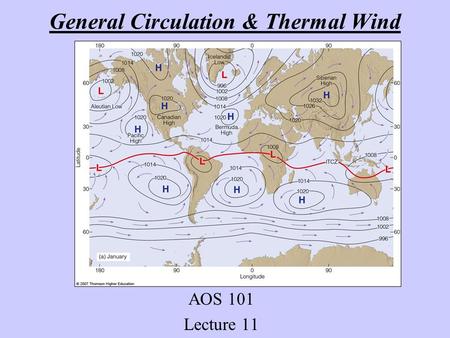