1 WIND Wind is movement of air caused by differences in air pressure.
The greater the difference, the faster the wind moves. Air flows from areas of high pressure to areas of low pressure. Differences in air pressure are caused by the uneven heating of Earth (because Earth is curved). Ultimate energy source for most wind is the Sun. Anemometer used to measure wind velocity. Wind vane is used to measure wind direction.

2 Air Pressure Highest at sea level and decreases with increasing altitude. Why don’t we feel the tons of air pressing on us? Why don’t objects collapse under the weight of the air above them? Air pressure is measured using a barometer. As air pressure increases the mercury rises in the barometer. The Standard atmospheric pressure at sea level is inches.

13 Jet Streams They are narrow belts of high speed winds that blow in the upper troposphere and lower stratosphere. (between 7 km and 16 km above Earth’s surface) Jet stream flow parallel to isobars. They blow from west to east at average speeds between 97 and 185 km/hr. They follow boundaries between hot and cold air. Airplanes travelling in the same direction as the jet stream go faster than those travelling in the opposite direction of a jet stream. 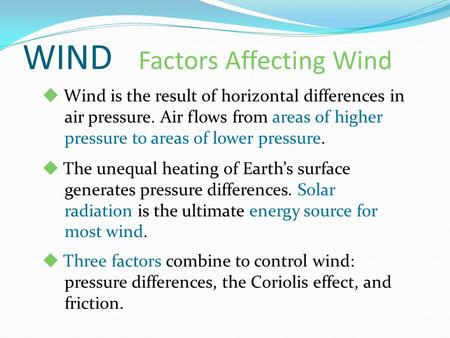 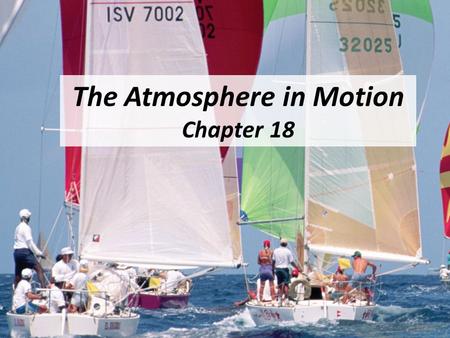 The Atmosphere in Motion Chapter 18