12 Diphthongs Specifically …
Rate of frequency change. The faster the rate of change the easier it is to perceive Brief steady state formant pattern at the beginning and the end of the diphthong also improves perception. I.e., tense monothongs are more difficult to perceive because they lack the long steady state formant. Speech Perception

16 Nasals Most important decisions when perceiving nasals. Important Cues
Is the speech segment nasal or non-nasal? If it is a nasal, which nasal is it? Important Cues Transition between nasal and adjacent vowel Weakening of upper formants Lengthening of nasal tract causes primary resonant frequency to drop from 500 to about 250 Hz. Lowering of intensity when compared to vowels. Speech Perception

20 Nasals (continued) Resonance and anti-resonant patterns are different for different nasals. This is important for discriminating between /m/ and /n/, but not important for perceiving /ng/ Nasal murmur Speech Perception

22 Stops (manner) Cues for manner Oral occlusion is heard either as a …
Silence in the voiceless stop /p-t-k/ Brief attenuation of sound in voiced stops /b-d-g/. Stopped air is often released and heard as a plosive (i.e., and aperiodic sound source) Stops have much shorter transition to and from adjacent vowels than semi-vowels. Speech Perception

27 Stops (place of articulation)
F2 transition. Depending upon direction of transition, different stop plosives will be perceived. Refer to previous slide. Speech Perception 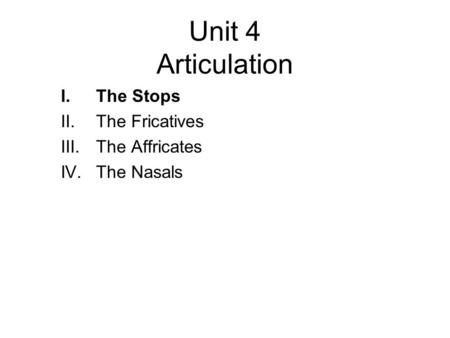