4 Christianity The early Hebrews who eventually developed into the Jewish religion became the foundation of Christianity. Jesus, or the Messiah, was a Jewish boy who disagreed with some of the Jewish principles of his day began to profess a new way of thinking. This eventually led to the beginning of the Christian religion.

5 Christianity Christianity started about 2000 years ago about the same time of Jesus. The central point of Christian belief is that God, the Father, entered into human history as the Son, Jesus of Nazereth, and arose as the Holy Spirit.

6 Christian Philosophy God is the Creator of the universe. There is one God, Who is Three  Persons-      Father, Son and Holy Spirit. Jesus is both fully man and fully God.  He was born of the Virgin Mary  Crucified, resurrected from the dead, and ascended to the Father.

7 Christian Philosophy Sin and Evil are realities in our existence. The Bible is the Holy Book that records God's revelation. All believers are promised life everlasting. The leader of Christianity was Jesus, and the followers was his 12 disciples.

8 Buddhism Founding person of Buddhism is Guatama, the Buddha
The Dalai Lama is a Buddhist monk who remains the leader of the Tibetans. Buddhism is a major religion in China, Japan, India, and Tibet.

9 The Major Philosophy of Buddhism
Love: without conditions Compassion: or feeling at one with the person who is suffering Sympathetic Joy:Celebrate the happiness of others, and do not resent their good fortune. Impartiality: Treat everyone equally, and do not use others for personal gain or to win approval.

10 The Major Philosophy of Buddhism
Buddhism states that existence is a continuing cycle of death and rebirth called reincarnation. Each person's position in life is determined by his or her behavior in the previous life. This is known as their "karma" (also a Hindu belief).

11 Buddhism Buddhism is the world's oldest universal religion and it is the second fastest growing religion.

12 Islam ISLAM is the name given to the religion preached by the prophet Muhammad in the 600s A. D. The Islamic religion started in the area known as Palestine in the year 600AD. It has about 850 million followers, most of them in the region north and east of the Mediterranean Sea.

13 Islam The holy book of Islam is the "Koran." Muslims believe its words to be those of Allah himself, spoken to Muhammad by an angel. Allah, is the Islamic God. People who believe these ideas are called Muslims.

14 Islamic Philosophy Muslims learn that life on earth is a period of testing and preparation for the life to come. Angels record good and bad deeds. People should behave themselves and help others, trusting in Allah's justice and mercy for their reward.

15 Islam Muslims pray five times daily in their mosques (churches).
While praying, they face the holy city of Mecca (in Saudi-Arabia) and sometimes kneel with faces to the ground. All Muslims are required to make a pilgrimage (trip to a sacred place) to Mecca at least once in their lifetime.

16 Hinduism HINDUISM is one of the world's oldest religions.
Over 2/3's of the world's Hindus live in India; large numbers reside in Africa also. Hindus believe in many gods, numbering into the thousands. They recognize one supreme spirit called Brahman ("the Absolute.")

17 Hindu Philosophy Hindus believe in many gods, numbering into the thousands. They recognize one supreme spirit called Brahman (the Absolute). The goal of Hindus is to someday join with Brahman. Until that union takes place, believers are in a continuous process of rebirth called "reincarnation."

18 Hindu Philosophy At death, the Hindu's deeds (karma) determine what the next life will be. Followers work to break this cycle--birth, death, re-birth-- (referred to by writers as the "Wheel of Life") and gain release. The Hindu's soul then merges with Brahman in a condition of spiritual perfection (moksha).

19 Hinduism Hinduism has many sacred books, the oldest being a series called the "Vedas.“ Traditional Hindu society was divided into groups of four classes (or varnas). This was known as the "caste system."

20 Judaism JUDAISM is a religion of just one people: the Jews. JUDAISM was the first to teach belief in only one God. Two other important religions developed from Judaism: Christianity and Islam.

21 Judaism Jews think that God will send a Messiah (a deliverer) to unite them and lead them in His way. Christians believe that Jesus was the Messiah. The Jewish people do not agree; they anticipate His arrival in the future. Judaism teaches that death is not the end and that there is a world to come.

22 Judaism The "Torah," the first five books of the Hebrew Bible, is the most important Jewish scripture. It contains the basic laws of Judaism. Another important book is the "Talmud," serving primarily as a guide to the civil and religious laws of Judaism.

23 Judaism The Jewish house of worship is called a synagogue.
Rabbis (spiritual leaders) conduct services, act as interpreters of Jewish laws, and deliver sermons. Today there are over 18 million followers of Judaism scattered throughout the world. A large number of those people live in the Jewish nation of Israel. Over six million live in the United States.

24 Jewish Philosophy God is one and unique God is the creator
God is transcendent God is immanent. God is lawgiver God is personal We have the obligation to worship The Torah is God's law God is judge The Messiah will come.

25 How much have you learned?
Let’s take a Chalkboard Challenge 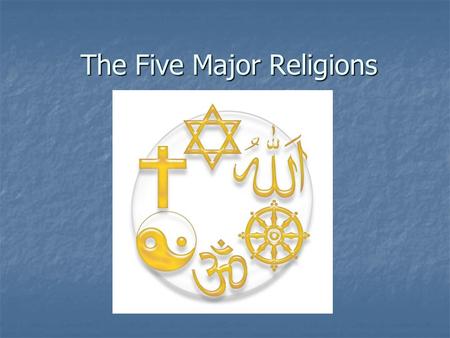 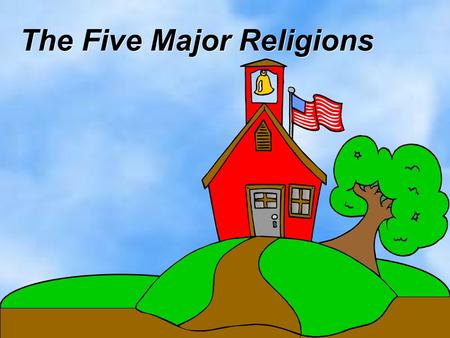