8 † Based on the life and teachings of Jesus Christ † Originated in Palestine in the 1st century AD † Believe that Jesus was the son of God who came and died for people’s sins and then rose so that all people could be saved † Believe in one God (monotheistic) who created the universe and all things in it. † Christianity originally developed as a part of Judaism

10  Monotheistic Based on the teachings of Jesus Christ  Largest religion in the world (1.9 Billion)  Bible is the Holy Book All believers are promised life everlasting. The leader of Christianity is Jesus, and the followers of Christianity are his 12 disciples.

12 BBased on the teachings of the prophet Muhammad. FFollowers of Islam are known as Muslims. TTwo main divisions in Islam: Sunni & Shia. (They strongly dislike each other) MMuslims follow the Five Pillars.

13 1.Faith in one God, Allah—monotheism 2. Five times daily prayer toward Mecca 3.Help for the poor 4.Fasting during the holy month of Ramadan 5.Pilgrimage to holy city of Mecca

14 Buddhism is the world's oldest universal religion and it is the second fastest growing religion. Buddhism was founded by Siddhartha Gautama in northern India around 560 BCE.  Focus on wisdom and meditation.  Goal is to become a “Buddha,” or “Enlightened One.”  Over 100,000,000 followers today.

16 Buddhism is a major religion in China, Japan, India, and Tibet. Each person's position in life is determined by his or her behavior in the previous life. This is known as their "karma" (also a Hindu belief). Buddhists believe in the eightfold path.

19 Today’s Tibetan Buddhists are led by the Dalai Lama, who advocates for freedom from China.

20 TT he first was that life is suffering You can’t live without death, frustration, etc. TT he second is that suffering is caused by craving and aversion Getting what you want doesn’t guarantee happiness, it deprives you of it TT he third is that suffering can be overcome, and true happiness attained If we stop craving useless things, and live each day one at a time (not living in the future) we will be happy and free. TT he fourth is that the Noble eight fold path leads to the end of all suffering

21 HINDUISM is one of the world's oldest religions and third largest. Over 2/3's of the world's Hindus live in India; Another large number of Hindus reside in Africa. Hinduism has no single founder, but originated from the mixing of Harappan and Aryan cultures in ancient India around 1500 BCE.

22 Hindus believe in many Gods, numbering into the thousands. They recognize one supreme spirit called Brahman ("the Absolute.") Soul of the universe. Brahma: Has 4 heads signifying knowledge of all things North, South, East & West. Also, is the God of knowledge and education. At death, the Hindu's deeds (karma) determine what the next life will be. Followers work to break this cycle--birth, death, re- birth-- (referred to by writers as the "Wheel of Life") and gain release.

23 Hindus believe in reincarnation. Life, to them, is circular. Note the circle around this Hindu god.

24 Hinduism has many sacred books, the oldest being a series called the "Vedas” Traditional Hindu society was divided into groups of four classes (or Varna's). This was known as the "caste system."

28  First major monotheistic religion  Holy Text- the Torah, the first five books of the Hebrew Bible.  The religious leader of a Jewish community is called a Rabbi  Judaism teaches that a person serves God by studying the Torah and living by its teachings.  The Torah is the basis for the civil and religious laws of the Jews. The main difference between Christians and Jews is their belief regarding Jesus. Jews do not believe him to be the son of God.  Many Jews live in Israel, but the religion can be found all over the world.

29 FOUNDER: FOUNDER: Abraham SACRED SYMBOL: Star of David SACRED TEXT: The Torah MENORAH - It is a symbol of the nation of Israel and a mission to be a light unto the nations. The Jewish house of worship is called a Synagogue.

30 Draw the appropriate symbol in the box with the correct religion.

32 Religions of the World VIDEO… 8 minutes / Music and Reading https://www.youtube.com/watch?v=-453WFmUFIU 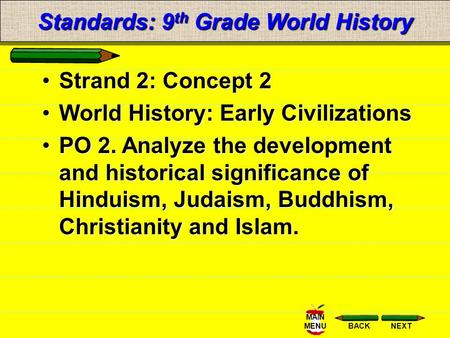 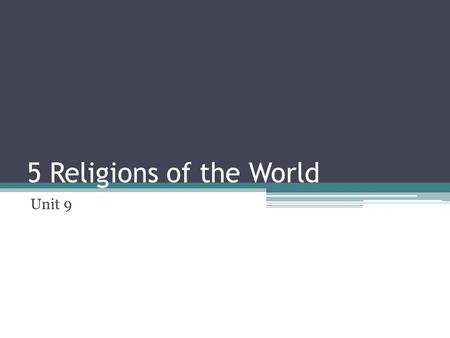