5 Chapter 4 MEDIATION Mediator tries to develop a solution acceptable to both sides of the dispute. The actions of a mediator are advisory — not binding.

6 Chapter 4 ARBITRATION An arbitrator usually holds an informal hearing to determine what happened. The arbitrator’s decision is binding on both parties. The decision can be enforced by court order if necessary.

10 Chapter 4 APPELLATE COURTS An appellate court reviews decisions of lower courts when a party claims an error was made during the previous proceeding. Appellate courts are concerned with errors of law rather than questions of fact Appellate courts DO NOT hear witnesses and generally do not except new evidence

14 ORIGINS OF OUR FEDERAL COURT SYSTEM
Chapter 4 ORIGINS OF OUR FEDERAL COURT SYSTEM Federal courts received their power from the Constitution. Article III - The Constitution granted Congress the power to establish inferior courts, as needed, to the U.S. Supreme Court. also confers the power to judge certain criminal and civil matters in federal courts

17 JURISDICTION OF THE FEDERAL COURTS
Chapter 4 JURISDICTION OF THE FEDERAL COURTS Federal District Courts Lowest level of federal court with general jurisdiction Trial court of the federal system Original jurisdictions over: Federal questions that arise under the Constitution Lawsuits between cities of different states, between a U.S. citizen and a foreign nation, or between a U.S. citizen and a citizen of a foreign nation

22 U.S. SUPREME COURT (cont’d)
Chapter 4 U.S. SUPREME COURT (cont’d) Writ of certiorari – compels the state court to turn over the record of the case to the Supreme Court for review Jurisdiction over state supreme court cases is limited Federal question must arise based on a federal law or on the U.S. Constitution Decisions made by the USSC are final and can only be overturned by the USSC or by an amendment to the Constitution

25 Chapter 4 STATE TRIAL COURTS General original jurisdiction over both criminal and civil matters – circuit court Some other states may refer to them as superior courts, district courts, or courts of common pleas These all represent a court of record – an exact account of what goes on at trial

28 Chapter 4 STATE SUPREME COURTS A panel of three or more justices reviews the legal issues and listens to the attorneys’ oral arguments Issue the final decision on matters of law appealed to them unless the U.S. Constitution or other federal issues are involved. Original jurisdiction over state impeachment cases 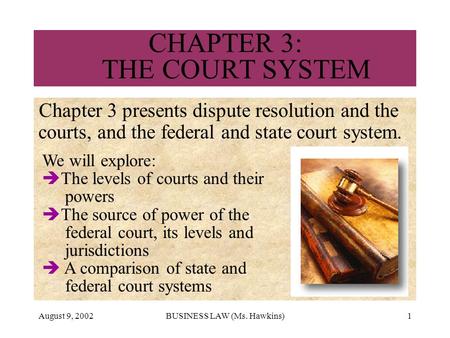 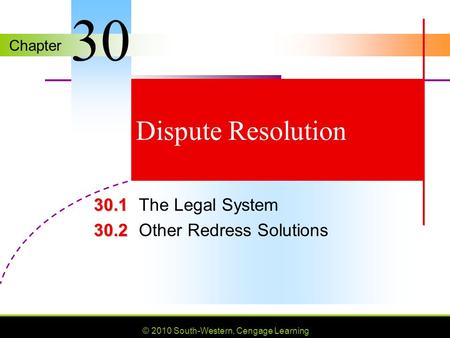