2 Resolving Disputes Privately
Many people litigate too quickly Litigate: to take a dispute to court Litigation Incurs costs, delays and difficulties Alternatives to litigation between parties Negotiation Mediation Use mediator: independent third party who tries to develop solution acceptable to both sides of dispute; non-binding Arbitration Use arbitrator: independent third party who makes binding decision in dispute The Court System 2

5 Appellate Court Reviews decisions of lower courts
Transcripts: verbatim records of what went on at previous trial Concerned with errors of law not questions of fact Appellate briefs: written arguments of issues of law Does not hear witnesses or accept new evidence Determines if lower court decision should be Affirmed Reversed Amended Remanded The Court System 5 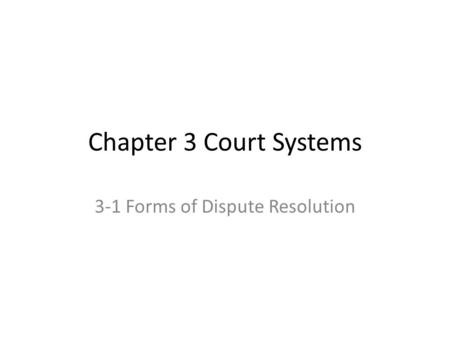