2 Illustrations in children’s books reflect the time period and the role of children and the family in that time period. Early books for children were instructional and usually written in Latin by religious teachers. The books were meant to instruct and to instill the principles of manners and customs, morals and religious beliefs; they were not meant to give delight. Stories of the 15 th and 16 th centuries were mostly historical telling of King Arthur, Adventures of Troy and Aesop’s Fables.

3 During the 16 th, 17th and 18 th the English became the “people of a book and that book was the Bible.” In a sincere desire to make children happy the Puritans brooded on sin, eternal torment, and the state of children’s souls. Unfortunately, the Puritan method of instilling religious ideas was mainly through the use of fear – the fear of Hell

4 A Token for Children published in 1728 “was the most popular book of moral instruction for children in the 18 th century. It contained 22 examples of pious and obedient children who were well prepared for the prospect of early death and judgment.”

5 ”A constant companion to beginning readers in Colonial America, the hornbook was a popular teaching aid in England during the 16 th through the 18 th century. The hornbook included the alphabet in lower and upper case, vowels, and numerals, accompanied by a cross ornament, the Benediction, and the Lord’s prayer.”

6 The first edition of Mother Goose appeared in about 1785 in the United States, but it was probably pirated from John Newbery’s edition published in England. John Newbery, the first publisher of books for children, is honored each year with the Newbery Medal presented for the year’s most distinguished book for children written by an American citizen or resident and published in the United States.

7 The American Library Association instituted a second award – this one for the most distinguished picture book for children published each year in the United States. It was named after Randolph Caldecott known for his nursery toy books that were first published in 1878. They were funny to children and adults. His illustrations for a Mother Goose book also were some of his most original and lovely creations.

8 Grimm’s Fairy Tales (Jacob and Wilhelm) was translated into English in 1823. The stories were gathered from old storytellers and were very somber and scary. Hans Christian Andersen’s Fairy Tales appeared in England in 1846. These were also adaptations of stories heard from old storytellers, but Andersen added his own fanciful inventions that enriched children’s imaginations. One of the first fanciful pieces of literature for children was “A visit from St. Nicholas” by Clement Moore. It was published in 1822 and was actually a long story poem.

9 “The first English masterpiece written for children came in 1865 – Alice’s Adventures in Wonderland by Charles Dodgson, who used the pen name of Lewis Carroll. It was first told, and later written, solely for the entertainment of children, and neither it nor its sequel, Through the Looking Glass, has the faintest trace of a moral or a scrap of useful information or one improving lesson – only cheerful lunacy, daft, and delight”

10 19 th century illustrations will show the Victorian structure of the family – the father is the central figure with the rest of the family gathered around. Stories of this time are very didactic and moralistic because it was believed that children were easily led astray. The Children's object book. London ; New York : F. Warne & Co., [188-?]

11 School Begins, copyright 1899. “Uncle Sam is lecturing 4 children labeled Philippines, Hawaii, Puerto Rico and Cuba in front of children holding books labeled with various U.S. states. In the background is an American Indian holding a book upside down and a Chinese boy is at the door.”

12 Early 20 th century books begin to show a softer version of children playing and reading though still dressed very proper and stiff. In the 1920’s and 1930’s children were shown playing on their own and were portrayed in more leisure activities. Children of our town pictures by E. Mars and M.H. Squire ; with verses by Carolyn Wells. New York : R.H. Russell, 1902.

13 By the 1940’s and 1950’s more humor and mischief appeared in children’s books. Stories began to show that the authors were willing to write about children’s problems and negative aspects of their lives. Charlotte’s Web by E. B. White, New York: HarperCollins, 1952. Johnny Tremain by Esther Forbes, New York: Houghton Mifflin, 1943.

14 As the family structure began to change this was reflected in the stories written in the 1960’s, 70’s and 80’s. Sometimes only a father and child were the characters of the stories, other stories told of divorced parents and newly blended families. Bridge to Terabithia by Katherine Paterson. New York: Harper, 1977. Sarah, Plain and Tall by Patricia MacLachlan. New York: Harper & Row, 1985.

16 What is children’s literature? Books, stories, folklore, riddles, poems, etc From birth through age 18? Are there books for different age groups? Discuss.

18 Different genres of children’s literature A genre is a kind or type of literature that has a common set of characteristics. A genre is a grouping of books with similar style, form, or content. The same term is used for movies, music, plays, TV shows, artwork, etc. They often overlap, especially those of Early childhood.

21 Differences between children’s books now and then More experimentations with genres- from teaching values to fantasy, fiction, etc Blurring age boundaries- picture bks for everyone. Changing topics, eg., technology, terrorism Technology & commercialization, bks on audio and videotapes.: eg. Harry Potter. Increasing diversity melting pot vs salad bowl. International literature. Building on the past, looking into the future. Question: should we change the style of books to meet needs of American audience? 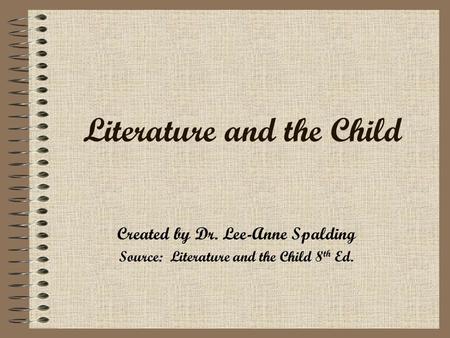 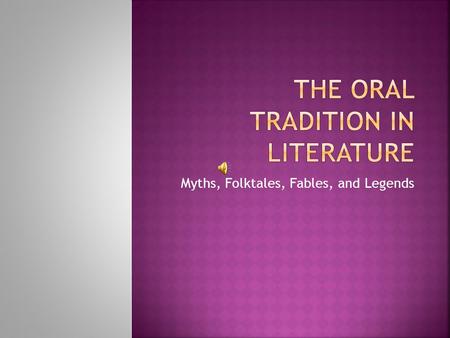 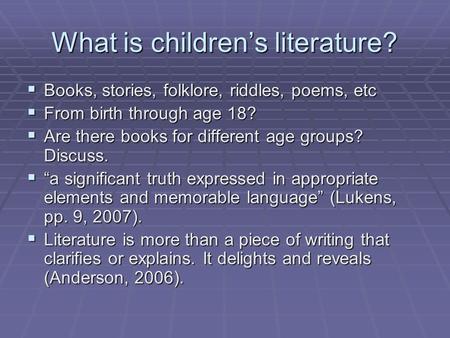 What is children’s literature? 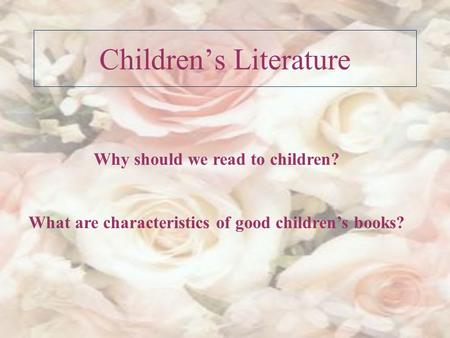 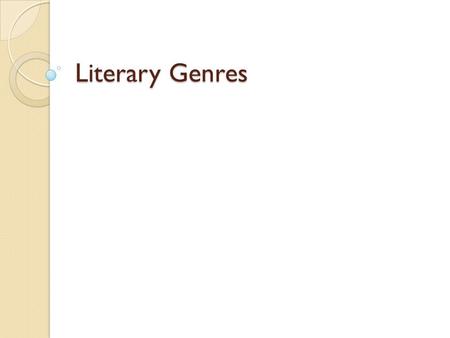 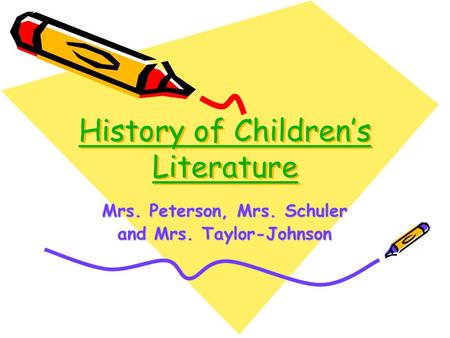 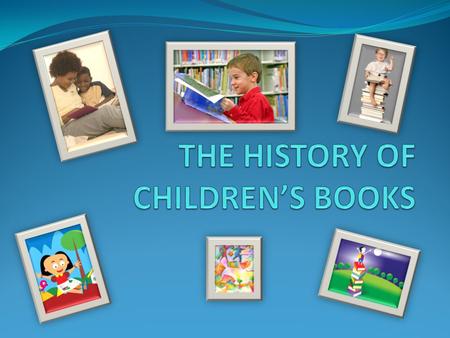 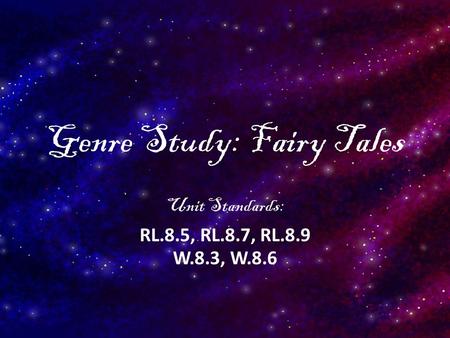 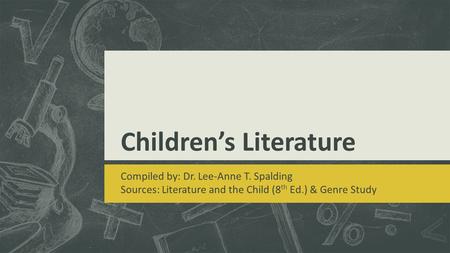 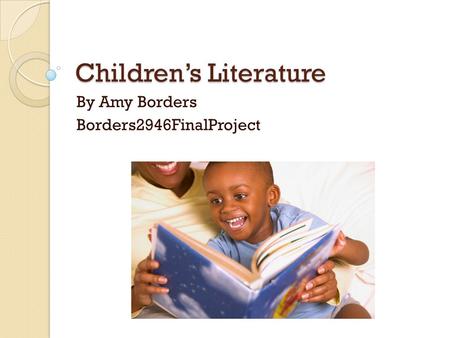 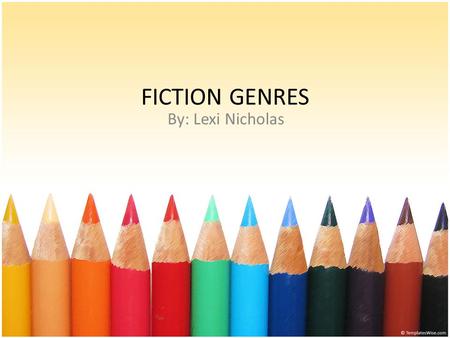 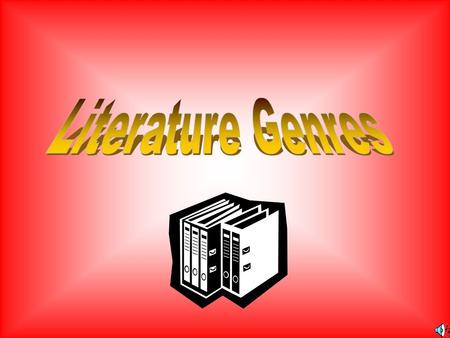 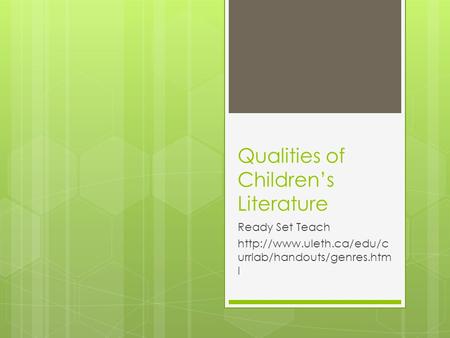 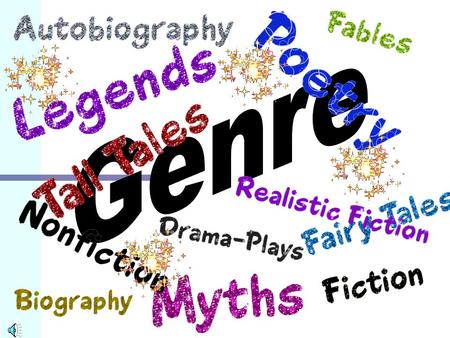 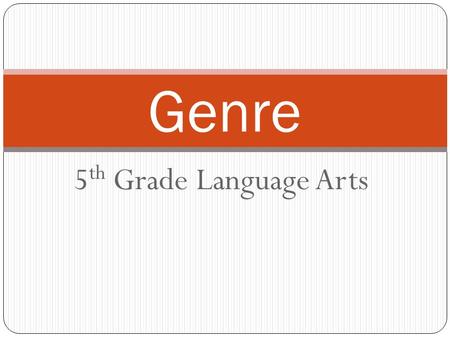 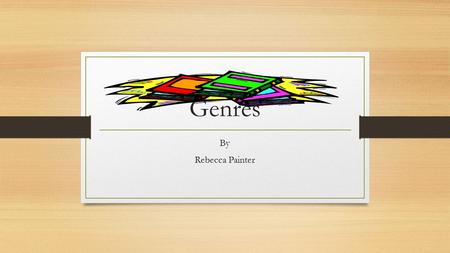 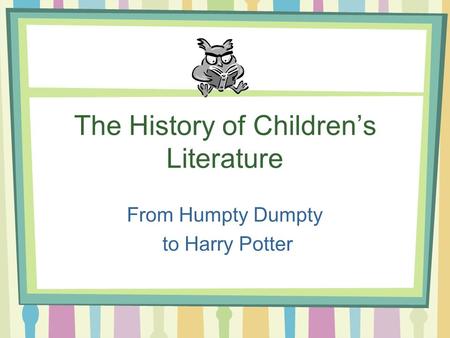 The History of Children’s Literature From Humpty Dumpty to Harry Potter. 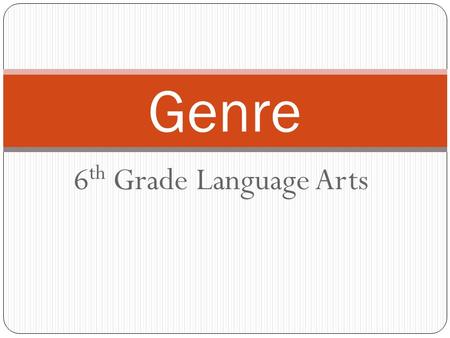 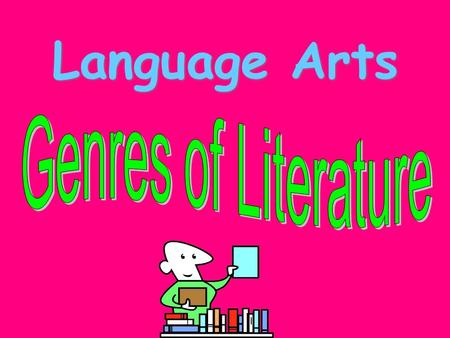 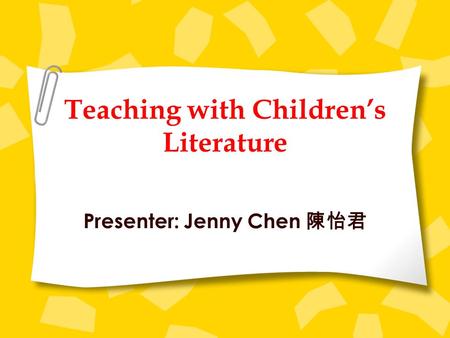