Presentation on theme: "Language and Thought Its all about communication."— Presentation transcript:

1 Language and Thought Its all about communication

2 Language Our spoken, written or gestured words and symbols and the way we combine them to communicate meaning Believe it or not, this communication is a form of language Why??

4 Different Parts of Language Phonemes sound (NOT – NOT LETTERS!!!) –The basic unit of sound in a spoken language (NOT – NOT LETTERS!!!) –English language has about 40 (make up the 500,000 or so words we have) –some units have more than one phonemes example - vowels – based on short or long sound dogdog has how many? phonemes –three phonemes – d, au, g ghoti How do you pronounce ghoti ?? Fish gh – from enough O – from women Ti – from emotion

6 Morphemes meaningThe smallest units of meaning Can be a word or part of a word (prefix or suffix). I or a Unbreakable –3 un break able Pretested –3 pre – test - ed phonemes So language consists of phonemes morphemes put together to become morphemes, which make up words.

7 Homophones a word that is pronounced the same as another word but differs in meaning. Examples

8 Syntax Language requires more than phonemes and morphemes. It also requires Syntax SyntaxSyntaxSyntax –The rules of grammar for combining words into sensible sentences (the form of sentences) –In English, adjectives come before nouns, but not in Spanish!! Is this the White House or the House White?

9 Semantics meaningThe set of rules by which we derive meaning Adding ed at the end of words means past tense.

10 Language development How many words do you think you know now? –probably around 80,000 After age 1 you average learning about 13 words a day

16 How does language influence our thinking?

17 Does the language we speak affect how we think??? Do people that speak more than one language think differently depending on their language at that time?

18 Whorf’s Linguistic Relativity Hypothesis Culture dictates language If you dont have a word for something than you cant develop a schema for that concept Different languages lead people to view and perceive the world differently because of the vocab and the syntax The Hopi tribe has no past tense in their language, so Whorf says they rarely think of the past Culture LanguageSchemas

19 Two other ways that people commonly use language to influence thinking are… Semantic slantingSemantic slanting –making statements so that they will evoke specific emotional responses –(preemptive attack vs. invasion because it sounds less negative) Name callingName calling –shapes our expectations and schemas– how? –i.e. gender terms can shape images of people – fireman or chairman

20 Do animals have cognitive abilities such as thinking, knowing, reasoning, language, and remembering?

21 Kohler’s Chimpanzees insightKohler showed that Chimps can problem solve (they have insight) Kohler constructed a variety of problems for the chimps, each of which involved obtaining food that was not directly accessible

24 Apes and Signing An ape named Washoe demonstrated reliable use of 240 signs Is this evidence of thinking or of language?

26 So, can apes acquire and use language?? language Some claim that the apes where just using operant conditioning principles –Imitating gestures and responses for which they were reinforced So it all depends on how we define language –If it means communication, then yes they may use language –But, if it means the use of syntax and semantics, then no and language may be unique to humans

Download ppt "Language and Thought Its all about communication." 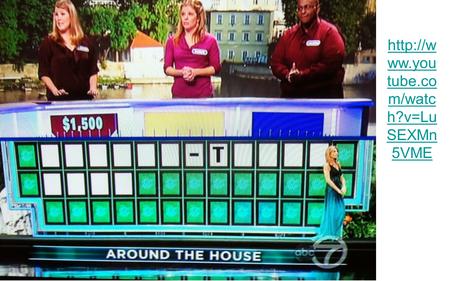 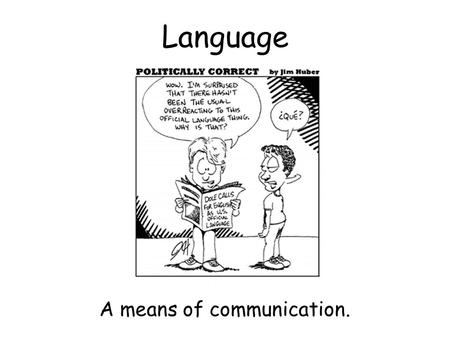 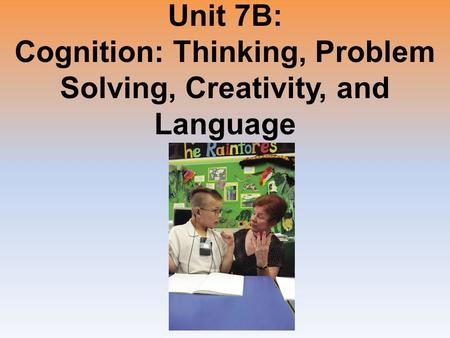