4 PROPAGANDA: FRIEND OR FOE? PROPAGANDA CAN BE USED TO INSPIRE……AND TO DESTROY.

5 PROPAGANDA: HOW DOES IT WORK? Propaganda employs a variety of techniques in order to persuade its audience to a desired view or position. NAME CALLING GLITTERING GENERALITIES TRANSFER TESTIMONIAL PLAIN FOLKS CARD STACKING BANDWAGON LOGICAL FALLACIES

6 PROPAGANDA: NAME CALLING Uses derogatory language or words that carry a negative connotation when describing an enemy. Attempts to arouse prejudice among the public by labeling the target something that the public dislikes.

8 PROPAGANDA: TRANSFER An attempt to make the subject view a certain item in the same way as they view another item. Used to transfer negative feelings for one object to another. In politics, this technique is often used to transfer blame or bad feelings from one politician to another or from one group of people to another.

9 PROPAGANDA: TESTIMONIAL Quotations or endorsements which attempt to connect a well-known or respectable person with a product or ideal with the intent to better “sell” the product or ideal.

11 PROPAGANDA: CARD STACKING Only presents information that is positive to an idea or proposal and omits information contrary to it. While the information presented is true, other important information is purposely omitted.

13 PROPAGANDA: LOGICAL FALLICIES An argument that sounds as if it makes sense but the premises given for the conclusion do not provide proper support for the argument.

16 “One People, One Reich, One Fuhrer!”; Germany; World War Two WHAT DO YOU NOTICE?

18 Britain; World War One WHAT DO YOU NOTICE?

20 PROPAGANDA: WHAT CAN YOU DO? Seek out reliable sources for information; Watch for combinations of half-truths and lies; Check for hidden messages; Watch for use of propaganda common traits; Be weary of one sided arguments.

21 PROPAGANDA: WHY WORRY? "Goebbels [Reich Minister of Propaganda 1933-1945] openly admitted that propaganda had little to do with the truth. 'Historical truth may be discovered by a professor of history. We, however, are serving historical necessity. It is not the task of art to be objectively true. The sole aim of propaganda is success’.” -Propaganda: The Art of Persuasion (Rhodes, 1976) 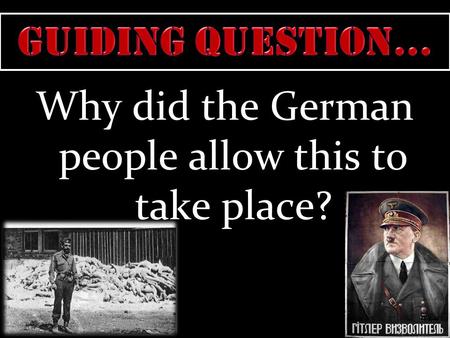 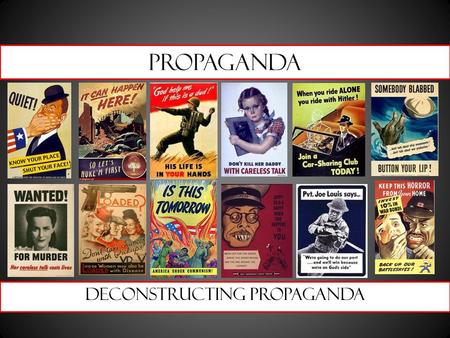 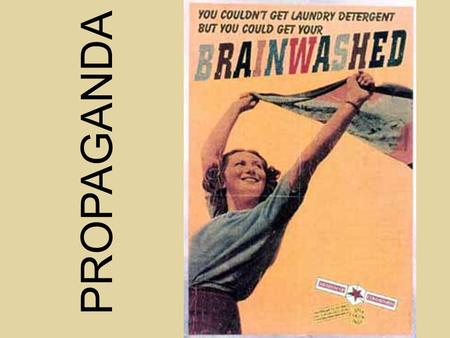