6 Octet Rule When elements form ionic compounds, changes occur in the arrangement of electrons in the outer orbit Electrons are gained or lost so that element can have a stable electron arrangement of the closest noble gas. In order for a compound to be stable, it must have a completely filled outer electron shell – aka stable octet

7 Metals Tend to have 1, 2, or 3 valence electrons (electrons in the outer orbit) They lose electrons when they combine with other elements to form positive ions (cations): note the t in the word think + They lose electrons, thus they have the same electron arrangement as the Noble gas a row above them E.g. Sodium: N 12 P 11 N 12 P 11

9 Lewis Symbols Since it is only the valence shell electrons that take part in chemical reactions, a Lewis symbol drawing is used to depict the electrons in the atoms valence shell. –Lewis Symbol – A diagram composed of a chemical symbol and dots, depicting the valence electrons of an atom or ion. Electrons are drawn on the four sides of the symbol. Each side can hold two electrons. The electrons are filled in one at a time until all the spaces are filled with one electron and then electrons are paired up. It’s like seats on the train. You don’t sit right beside someone if there are double empty seats all around you.

10 Lewis Symbols for Ions Draw the Lewis symbol for the ion showing all of the electrons in the outer shell. If there are none, just draw the symbol. Then draw square brackets around the symbol and in the upper right corner write the charge on the ion. E.g. Potassium, Calcium, Nitrogen, Oxygen, Chlorine (neutral and ion)

12 The Formation of Ionic Compounds Using Lewis symbols as follows: The bond between a positive and negative ion is an ionic bond.

13 The Structure of Ionic Compounds Large numbers of cations and anions arrange themselves into crystals. The rigid arrangement of ions is called a crystal lattice structure. The smallest repeating unit in an ionic crystal structure is called the formula unit

14 Explaining the Properties of Ionic Compounds They have high melting points because their ions are held together by strong electrostatic forces (ionic bonds). They are hard because their bonds resist being “stretched.” A piece of sodium chloride is easily cracked or fractured because, when an outside force strikes the crystal, the crystal lattice structure is offset as like charges are brought together. They are electrolytes because, when dissolved in water, ions separate (dissociate) from the crystal by water molecules releasing free-floating ions. Ions are able to move, and carry electric charges, through the water 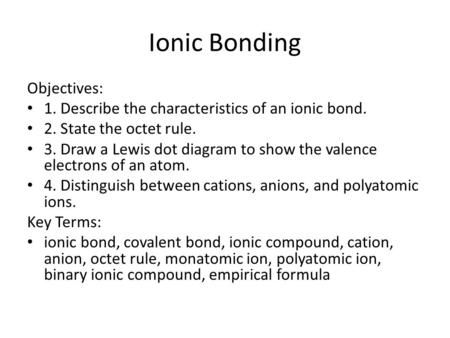