2 New Unit: Chemical Bonding
Essential Questions: What are the processes by which different atoms come together to form new compounds and what forces hold solutions of these compounds/molecules together?

3 Ions An atom with a charge Positive: cation Negative: anion
How do these atoms become charged?

6 Because of trends, we can also use group numbers!
Looking at the electron configuration for elements in the same group, they will all have the same number of valence electrons (just the A groups though! Not the B groups.)

7 Guided Practice on Valence Electrons
How many valence electrons are there in the following elements? Chlorine Calcium Aluminum Carbon Neon

17 Formation of Ionic Compounds
When writing the formulas, use the criss-cross method Mg Cl-1 MgCl2

20 Guided Practice on Ionic Compound Formulas
For the following pairs of elements, write the formula for the ionic compound formed Aluminum and Chlorine Sodium and Sulfur Nitrogen and fluorine 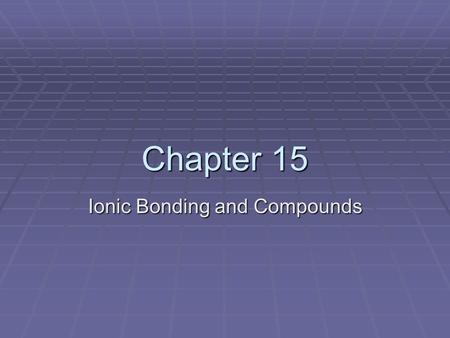 Chapter 15 Ionic Bonding and Compounds.  The properties and chemical reactivity of all compounds is based on how they are bonded together.  In this.