3 A genetically engineered mouse that can grow a human ear!

5 Hybridization Crossing (reproducing) different individuals to bring together the best of both organisms Produce a Hybrid which are often hardier than parents.

7 13-2: Manipulating DNA DNA Extraction – taking DNA out of the cell Restriction enzymes: are special enzymes that cut DNA in specific locations by recognizing certain base sequences...small pieces are easier to work with, study and identify now, let's organize: Gel electrophoresis: separates DNA fragments through a gel using electricity Some tools we use to change DNA: Genetic Engineering: making changes in the DNA of living organisms

9 Cutting and Pasting: we can make new DNA by combining DNA from different sources  this is called Recombinant DNA Polymerase Chain Reaction (PCR): uses DNA polymerase to create thousands of copies of a gene

13 Transforming Animal Cells DNA is injected into the nucleus of an egg. As the embryo grows the new DNA will be reproduced

14 Applications of Genetic Engineering: Biotechnology New technology has created a new field of study: Biotechnology We can create transgenic organisms – that contain genes from other organisms Glowing bumblebee: Modified Pigglets!

15 Transgenic organisms When an organism contains genes from other organisms. Example: –Scientists are inserting human genes into animals such as goats

17 Transgenic Plants Modified plants are important in our food supply! 25% of all corn grown in US in genetically modified Ex. They have natural insecticides, resist herbicides, vitamins

20 Cloning Clone: a member of a population of genetically identical cells produced from a single cell. 1997: first mammal cloned. Dolly, the sheep. 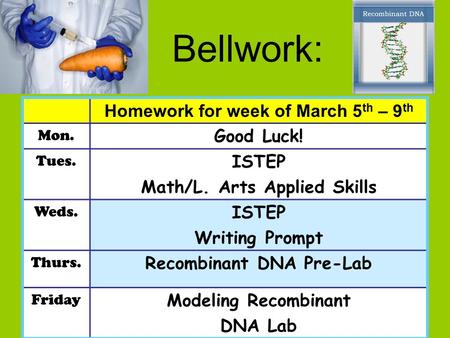