4 Genetic Engineering (Ch. 13.2)
Genes are isolated, modified, and inserted into an organism Made possible by recombinant technology Cut DNA up and recombine pieces Amplify modified pieces

6 What do you think about eating genetically modified foods?

9 Restriction Enzymes Molecular scissors that cut DNA at a specific nucleotide sequence Over 200 different restriction enzymes are known, each isolated from bacteria and able to cut DNA in a unique manner Scientists use restriction enzymes in the process of genetic engineering.

11 Recombinant DNA The ability to combine the DNA of one organism with the DNA of another organism.

14 DNA (Gene) cloning Want to study or isolate a particular gene
Need to get many copies (amplification) of the gene so it can be studied adequately Most organisms only have one or two copies of any gene per cell, so we need a way to amplify copies of that gene Do that via cloning into a vector This allows scientists to make additional copies of the gene using bacteria

17 Polymerase Chain Reaction (PCR)
PCR allows scientists to make many copies of a piece of DNA. Heat the DNA so it “unzips”. 2. Add the complementary nitrogenous bases. 3. Allow DNA to cool so the complementary strands can “zip” together.

22 What are these techniques used for?
Forensic: identifying criminals & victims Identifying disease genes in animals & humans Gene Therapy: inserting of new working copies of genes into humans Animal knockouts: turning off of a specific gene in order to discover its function

28 Ethical Issues Who decides what should be “corrected” through genetic engineering? Should animals be modified to provide organs for human transplants? Should humans be cloned? 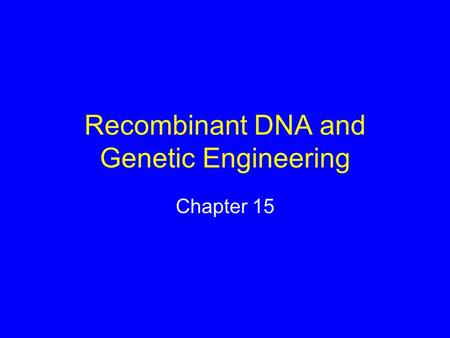