2 Selective Breeding Choose organisms with the desired traits and breed them, so the next generation also has those traits Nearly all domesticated animals and crops Luther Burbank (1849-1926) developed >800 diff varieties of plants in his lifetime

5 Inbreeding Breeding two organisms that are very similar to produce offspring with the desired traits. –Ex – dog breeds Risks – might bring together two individuals that carry bad recessive genes – many purebred dogs have genetic disorders that mutts don’t get.

6 Increasing Variation Induce mutations – the ultimate source of genetic variations among a group of organisms –Mutagens used – radiation and chemicals –Some organisms are formed that have more desirable variations.

10 Producing new kinds of bacteria Can expose millions of bacteria at one time to radiation – increases chances of producing a successful mutant. –Ex – bacteria that can digest oil have been produced this way

14 Manipulating DNA – tools of the molecular biologist DNA extraction – open the cells and separate DNA from all the other cell parts. –Remember the kiwi lab?

15 Cutting DNA Use restriction enzymes – each one cuts DNA at a specific sequence of nucleotides. This will make different lengths of DNA

16 Separating DNA – Gel Electrophoresis –Place fragments at one end of a porous gel – we use agarose gel –Apply an electric current – The DNA is negatively charged and will travel toward the positive end of the gel. –The larger pieces of DNA move slower, the smaller ones faster. –Used to compare genomes of different organisms or different individuals. –Also used to locate and identify one particular gene out of an individual’s genome.

19 Using the DNA Sequence Sequence can be read, studied, and changed. Techniques used to study DNA sequences: –Use DNA polymerase and the 4 DNA bases to produce a new DNA strand complementary to unknown strand – some of the bases are dyed. Dye-labeled strands are then separated using gel electrophoresis and the order of the bands tells the DNA sequence of the unknown strand.

20 Cutting and Pasting – make recombinant DNA (DNA from two different organisms). –Cut out the gene to be inserted, use same restriction enzyme to cut the receiving DNA strand, attach the two DNA strands

21 Making Copies Polymerase Chain Reaction (PCR) is used to make many copies of the same piece of DNA like a photocopy machine makes copies of papers. This is useful if there is only a very small sample of DNA available (as that found in a small blood drop at a crime scene)

22 Cell Transformation A cell takes in DNA from outside the cell and that DNA then becomes part of the cell’s DNA. Bacteria – place DNA in the solution that bacteria live in, and some of that DNA will be taken in by the bacteria cells.

23 Bacteria Transformation using Recombinant DNA Cut a gene with a restriction enzyme out of a human cell (ex – gene for insulin or growth hormone work well) Cut a bacterial plasmid using the same restriction enzyme (DNA ends will be complementary) Insert Human gene into bacterial plasmid Insert plasmid back into bacterial cell Bacteria will multiply, and all offspring will have that gene – these bacteria will then follow the directions of the human gene and make the protein coded for (insulin or human growth hormone)

26 Transforming Animal Cells –Directly inject DNA into the nucleus of an egg – it will become part of the chromosomes. Has been used to replace specific genes. Glowing mouse cells in embryos that were made from sperm given the gene for bioluminescence from jellyfish – now all the cells glow!

27 Applications of Genetic Engineering Gene for luciferase was isolated from fireflies and inserted into tobacco plants – they glowed! Transgenic organisms – contain genes from other species A transgenic mouse, which carries a jellyfish gene, glows green under fluorescent light.

28 Transgenic Organisms Bacteria - Make human proteins like insulin Plants – 52% of soybeans, 25% of corn in US in year 2000. Some produce natural insecticide, some resist weed-killers, may soon be used to produce human antibodies; rice with vitamin A.

30 Cloning Clone – member of a population of genetically identical cells produced from a single cell. 1996 – Dolly cloned – 1 st mammal (sheep) cloned. She got arthritis several years earlier than most sheep Died in 2003 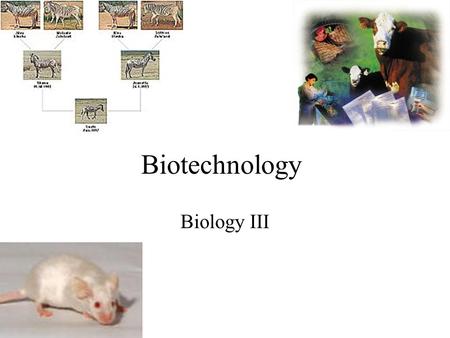