Events are told by a character in the story The narrative will read, “I sat at my wooden desk, looking up at that huge circle with its eternally trapped.

Presentation on theme: "Events are told by a character in the story The narrative will read, “I sat at my wooden desk, looking up at that huge circle with its eternally trapped."— Presentation transcript:

2 Events are told by a character in the story The narrative will read, “I sat at my wooden desk, looking up at that huge circle with its eternally trapped hands, and cried.” from The Year of Fog, Michelle Richmond

3 The events of the story are told by someone outside of the story The narrative will read, “Armpit sighed as he set the phone back in its cradle. Maybe he was crazy.” from Small Steps, Louis Sachar

4 A quality or qualities of a particular character that identify what the character is like For example in Charlotte’s Web, the reader comes to understand that Charlotte is kind, not because the author says so, but because over and over again, the reader sees her treating the other animals with kindness.

5 The most exciting point of a story, where is action is at its greatest point and the story begins to turn The climax of the novel Holes is when the characters realize that Camp Green Lake is not a legitimate juvenile facility.

8 Use of extreme exaggeration For example, “My car is a million years old.” OR “I walked five-thousand miles to school.”

11 Words or phrases used to appeal to one or more of the senses, in order to create a more vivid reading experience “The scent of roses-wild roses- mingled with a strange briny scent: waves crashing on rocky shores, dolphins diving.” from Wicked Lovely by Melissa Marr

12 A conclusion reached by the reader, based on the available information in the text We can infer that the three bears were very trusting since they left their house open and their bowls of porridge out on the table.

13 A situation where the opposite of what is expected to occur DOES in fact happen. “The ambulance driver rushed to the scene of the accident, but in his haste, he ran over the victim because the victim had crawled into the middle of the street in the darkness of night.”

15 The narrative is the writing or speech that tells a story. The narrator is the person who actually tells the story.

17 Giving human characteristics to a non-human subject “The cat grinned at me and began her wicked plan.” “The daisy lifted its face to the sun.”

Download ppt "Events are told by a character in the story The narrative will read, “I sat at my wooden desk, looking up at that huge circle with its eternally trapped." 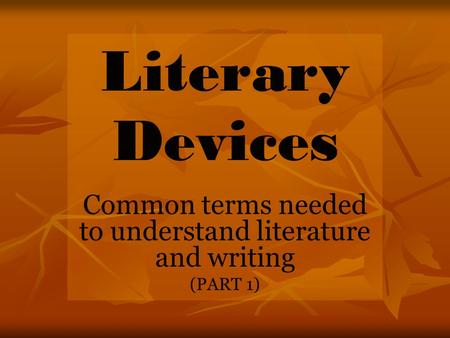