Presentation on theme: "VERBALS BY ALEXIS KITCHENS. VERBALS A verbal is the form of a verb used as a noun,adjective or adverbs. A verbal is a word formed from a verb but functioning."— Presentation transcript:

2 VERBALS A verbal is the form of a verb used as a noun,adjective or adverbs. A verbal is a word formed from a verb but functioning as a different part of speech A verbal is a noun or adjective formed from adverb. There are three main forms of verbals which are gerunds(which act like nouns),particles( which act like adjectives) and infinitives( which act can act like a noun, adjective or adverb) Ex: Participle: Catch a falling star. / He is a fallen hero. Ex: Gerund: Swimming the Channel must be difficult. Ex: Infinitive: She loves to swim.

3 GERUNDS A gerund is a verb form ending in –ing. The Gerund is a verbal noun—it is derived from the verb, but we use it as a noun. We form a gerund by adding -ing to the simple form of the verb, or the root infinitive. A gerund can be the subject, object of a verb,subject complements, direct objects, and indirect objects because gerunds function as nouns. It can also act as the object of a preposition. Smoking can cause cancer. (Here the gerund smoking acts as the subject of the verb.) I am thinking of taking a break. (Here the gerund taking is the object of the preposition of.) She is confident of winning. (NOT She is confident of to win.) (NOT She is confident to win.)

4 GERUNDS Gerunds are formed with -ing. (thinking, singing, walking, talking, listening) As a noun it may function as: (1) the subject or complement of a verb: "Seeing is believing." (2) the object of a verb: "I admire his singing." (3) the object of a preposition: "She is good at running." As a verb it may be: (1) modified by an adverb, or by an adverbial phrase: "He began laughing harmoniously." (2) when transitive, it may control a noun or pronoun in the objective case: "Playing golf is great sport.” Gerunds are often phrasal: EX.— "I hate being seen at her house." EX.— "He knew of my having been fired."

5 PARTICIPLES past and present. They are two of the five forms or principal parts that every verb hasverb past participles do not have a consistent ending. The past participles of all regular verbs end in ed; the past participles of irregular verbs, however, vary considerably. If you look at bring and sing, for example, you'll see that their past participles—brought and sung—do not follow the same pattern even though both verbs haveing as the last three letters. Participles have three functions in sentences. They can be components of multipart verbs, or they can function as adjectives or nouns.adjectivesnouns Past and present participles often function as adjectives that describe nouns.adjectivesnouns The crying baby drew a long breath and sucked in a spider crouching in the corner of the crib. (Which baby? The crying baby. Which spider? The one that wascrouching in the corner.)

7 PARTICIPLES Base formPast simple Past participle finishfinished stopstopped workworked The following is a regular verb chart Participles are forms of the verb that function as adjectives. They can end in "ed," "en," or "ing."

8 INFINITIVES The infinitive form of a verbs is when a verb is preceded by the word to it is said to be in it’s infinitive form or most basic form An infinitive is a verbal consisting of the word to plus a verb (in its simplest "stem" form) and functioning as a noun, adjective, or adverb. The term verbal indicates that an infinitive, like the other two kinds of verbals, is based on a verb and therefore expresses action or a state of being. the infinitive may function as a subject, direct object, subject complement, adjective, or adverb in a sentence. An infinitive is easy to locate because of the to + verb form, deciding what function it has in a sentence can sometimes be confusing. Infinitives are formed with to. (to think, to sing, to walk, to talk, to listen) I have to smoke that!(to smoke - infinitive form of the verb) The infinitive form is the verb that Is modified to conjugate it. Therefore the infinitive form cannot have a -s, -es, -ed, or -ing ending. Infinitives can lose their to when it follows certain verbs like feel, hear, help, let, make, etc. Infinitives can be used as nouns adjective or adverbs

9 INFINITIVES EX: To wait seemed foolish when decisive action was required. (subject) Everyone wanted to go. (direct object) His ambition is to fly. (subject complement) He lacked the strength to resist. (adjective) We must study to learn. (adverb) Be sure not to confuse an infinitive—a verbal consisting of to plus a verb—with a prepositional phrase beginning with to, which consists of to plus a noun or pronoun and any modifiers. Infinitives: to fly, to draw, to become, to enter, to stand, to catch, to belong Prepositional Phrases: to him, to the committee, to my house, to the mountains, to us, to this address An Infinitive Phrase is a group of words consisting of an infinitive and the modifier(s) and/or (pro)noun(s) or noun phrase(s) that function as the actor(s), direct object(s), indirect object(s), or complement(s) of the action or state expressed in the infinitive,

Download ppt "VERBALS BY ALEXIS KITCHENS. VERBALS A verbal is the form of a verb used as a noun,adjective or adverbs. A verbal is a word formed from a verb but functioning." 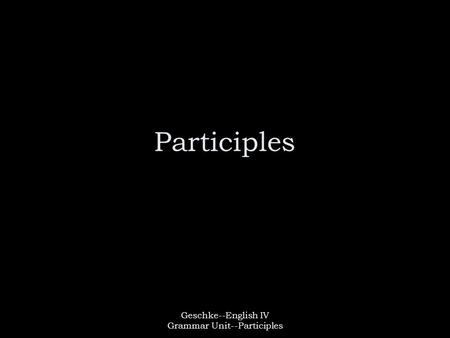 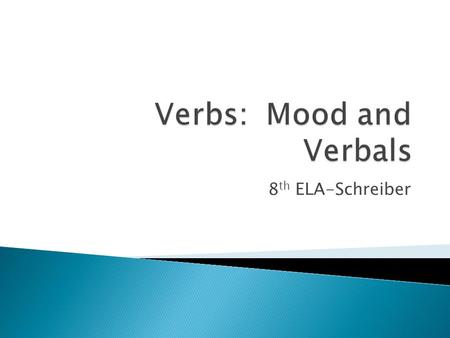