2 Flammable and Combustible Liquids
The determining factor in whether a liquid is flammable or combustible is its flashpoint. Flashpoint: The minimum temperature at which a liquid gives off enough vapor within a test vessel in sufficient concentration to form an ignitable mixture with air near the surface of the liquid. Remember, it is the vapors, not the liquid, that Burns! A chemical’s flashpoint is listed on the MSDS under the Fire and Explosion section.

9 Explosive Limits Explosive limits involve the concentration level of the given chemical in the air. In popular jargon, a vapor/air mixture below the flammable limit is too lean to burn or explode. A mixture above the upper flammable limits is too rich to burn. Most flammable liquids are volatile, meaning they evaporate quickly, and can reach a concentration in air that could lead to an explosion.

11 Controlling the potential for fire and explosion with flammable liquids is done through safe Storage, Transfer, Use and Disposal!

14 Flammable and Combustible Liquids
Definitions (cont.) Ventilation: Adequate if it is sufficient to prevent the accumulation of significant quantities of vapor-air mixtures in concentrations over ¼ of the Lower Explosive Limit. Safety Can: An approved red container, of not more than 5 gallons capacity, having a spring-closing lid and spout cover and so designed that it will safely relieve internal pressure when subjected to fire exposure. Oily Waste Can: A self closing metal container used to store oil soaked rags.

15 Container & Portable Tank Storage
Design, Construction and Capacity of Containers Only approved containers and portable tanks may be used to store flammable and combustible liquids. Metal containers and portable tanks meeting the requirements of the Department of Transportation are deemed acceptable when containing products. Not more than 60 gallons of Class I and/or Class II liquids, or not more than 120 gallons of Class III liquids may be stored in an individual cabinet. FLAMMABLE Keep Fire Away

16 Safe Storage Practices
No open flames, smoking, sparks or welding is allowed in flammable liquid storage areas. Store in a cool location. Not outside in direct sunlight. The warmer the flammable liquid is the more vapors it generates! Storage shall be in an open or well ventilated area. Do not store need oxidizers. Drums of flammable liquid shall be grounded. A 10 lbs. fire extinguisher shall be readily accessible within the storage area.

17 Storage Inside Building
Flammable or combustible liquid drums shall not be stored so as to limit use of exits, stairways, or areas normally used for the safe egress of people. The storage of flammable or combustible liquids in containers or portable tanks is prohibited in office occupancy areas, except that which is required for maintenance and operation of building and operation of equipment. Leaking containers shall be removed to a storage room or taken to a safe location outside and the contents transferred to an undamaged container.

19 Transferring of Flammable Liquids
Liquids shall be kept in covered/closed containers when actually not in use. Open flame and smoking is strictly prohibited in transferring areas. Liquid transfer shall be through a devise drawing through the top of the drum or by gravity through an approved self-closing valve. Transfer by air pressure is prohibited. Containers from which flammable liquids are dispensed are to be grounded and bonded to avoid fire due to static electricity. Flammable liquids are only to be dispensed into approved safety cans. 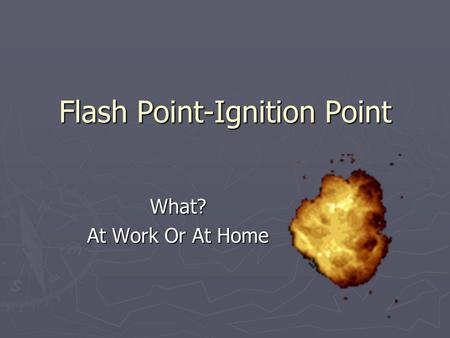 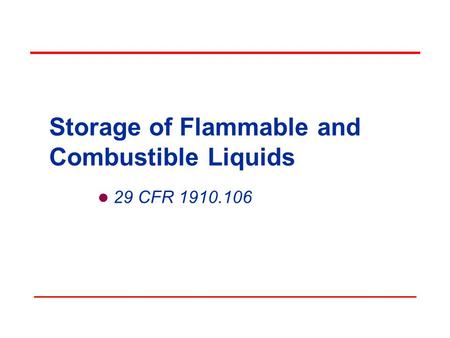 Storage of Flammable and Combustible Liquids 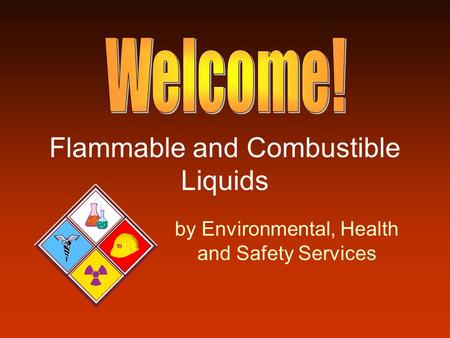 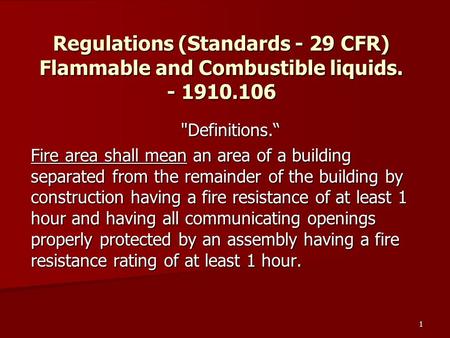 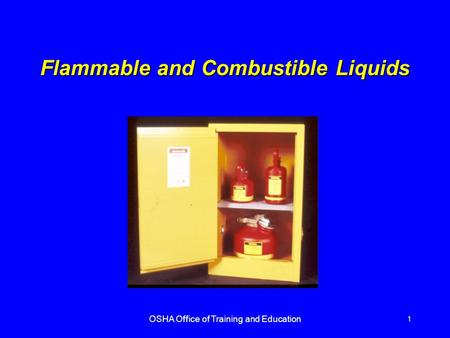 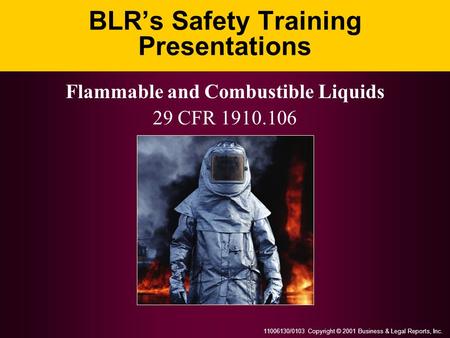 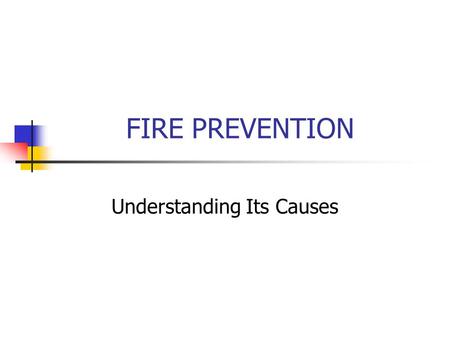 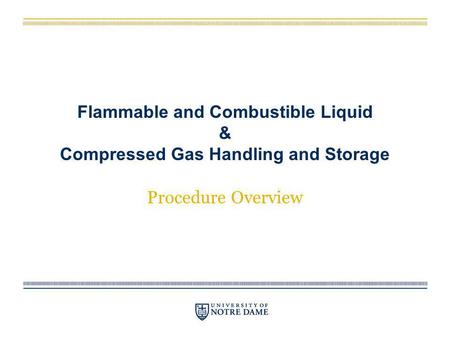 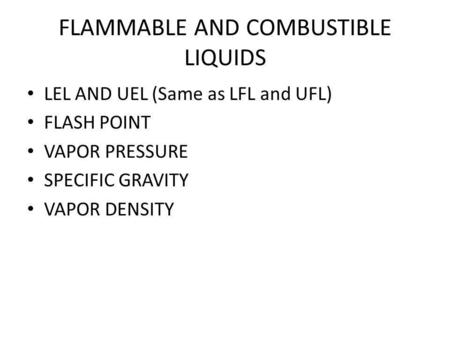 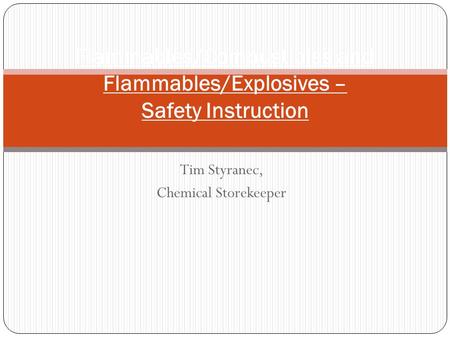 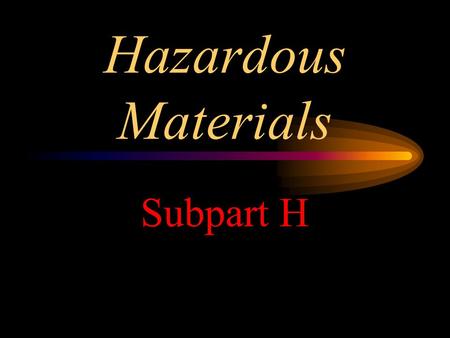 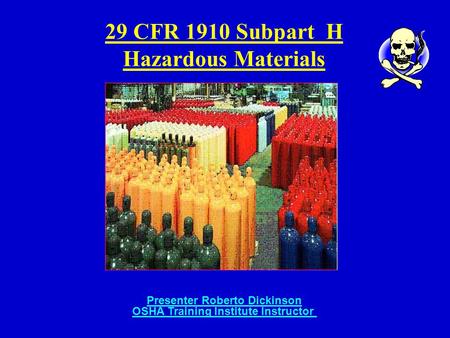 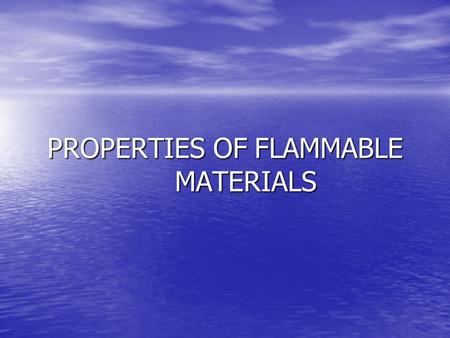 PROPERTIES OF FLAMMABLE MATERIALS. Flammability Flammable Flammable –Capable of being ignited and of burning –Synonymous with combustible. 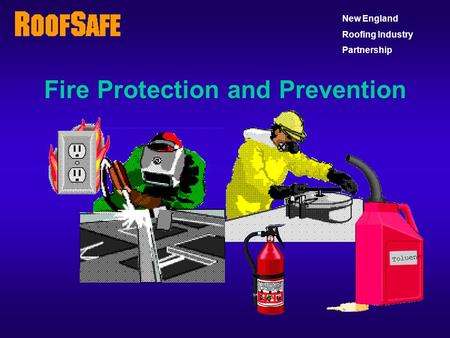 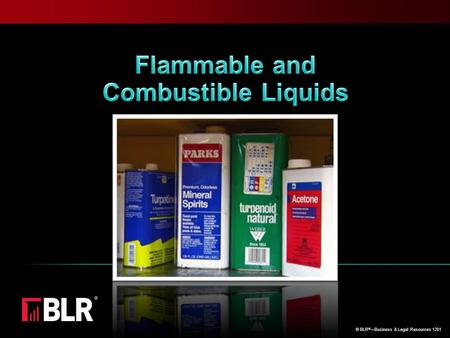 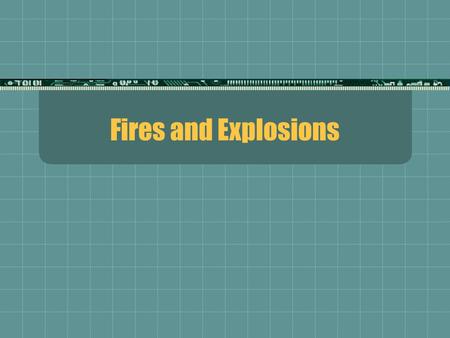 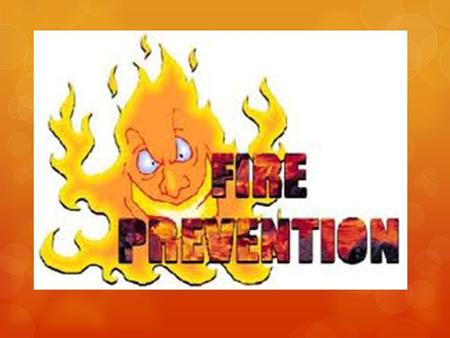 The three essential ingredient for creating a fire are HEAT, AIR AND FUEL Fire triangle. 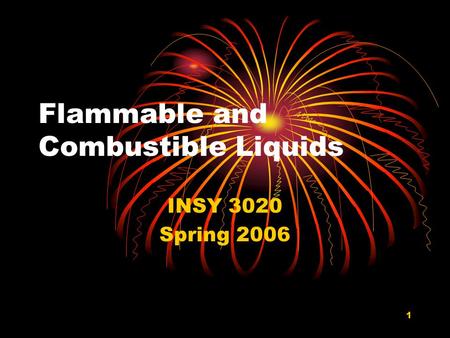 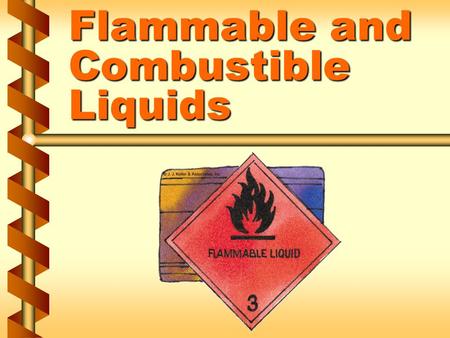 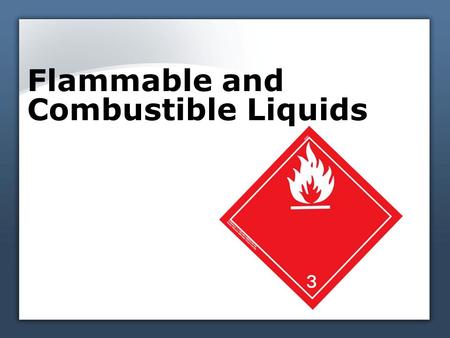 Flammable and Combustible Liquids. Flammable liquids Class I - liquids have flashpoints below 100 degrees F, with vapor pressures not exceeding 40 psia.