Presentation on theme: "Canada and the 5 Themes of Geography: A Study Guide"— Presentation transcript:

1 Canada and the 5 Themes of Geography: A Study Guide
Our neighbor to the north (for most Americans)…and east (for Detroiters)…and west (for Maine)…and south (for Alaska)…

2 The 5 Themes of Geography
Location where places are Place characteristics of places and the people who live there Human/Environment Interaction relationships between people and their environments Movement movement of material, people, or ideas among places Regions areas sharing several characteristics

3 Location Geographers want to know Where is it?
Absolute Location (the address) Relative Location (where is it in relation to other places?) Why is it located there?

4 Absolute Location and Canada
Does Canada have an ‘address’? Cities and towns in Canada do! Each place in Canada has an address. Geographers identify these addresses using: Latitude Longitude AND

11 HUMAN-ENVIRONMENT INTERACTION
How do people interact with and change their environments?

12 Human Use people depend on the environment and its resources
What resources do Canadians use? Let’s try this… It’s a big country…

14 Human Adaptation people change in response to different environments
How have Canadians adapted to their varied environments? It’s a big country… Let’s try this…

16 Human Impact people change the environment
How have Canadians changed their environment? It’s a big country… Let’s try this…

17 Explain how each of the following has changed Canada’s environment.
The St. Lawrence Seaway The Mining Industry The Timber Industry The Agriculture Industry The seaway added canals and locks to bypass the narrow and shallow parts of the St. Lawrence River. The land has been altered as minerals and fossil fuels have been removed from the ground. Forests have been cleared for timber. Roads have been built to transport the timber for processing. Land has been plowed and vegetation removed to make way for crops. Farming communities have used other lands previously empty.

21 DIFFUSION movement of IDEAS and INFORMATION Movement of Information

22 (people and other living things) (ideas and information)
Which type(s) of movement? Can you tell the difference? Be prepared to explain your answers. (Note: There could be more than one correct answer!) EXAMPLE MOVEMENT OF MATERIAL MIGRATION (people and other living things) DIFFUSION (ideas and information) French is spoken by almost all of Montreal’s citizens. British Columbia’s ports link Canada to its Asian trading partners. Canada’s earliest people came from Asia. Separatists want Quebec to become an independent country. The Canadian government is modeled on the British government.

23 REGIONS How can we generalize about areas of the world?
Which places share similar characteristics or processes?

29 The Atlantic (Maritime) Provinces
The region’s provinces have at least one border on the Atlantic Ocean or one of its gulfs and seas. The fishing industry employs approximately 3% of the region’s workers. Most jobs in the region are in manufacturing, farming, mining, shipping, and tourism.

Download ppt "Canada and the 5 Themes of Geography: A Study Guide" 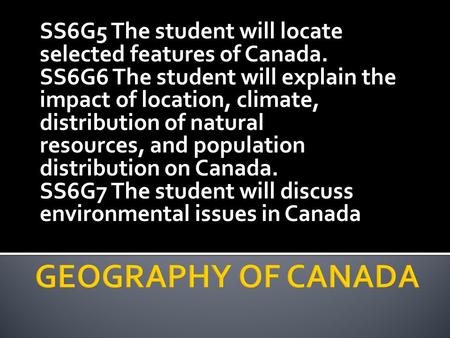