2 The Atlantic Provinces
Newfoundland and Labrador Prince Edward Island Nova Scotia New Brunswick These provinces are in the southeastern corner of Canada. All four border the Atlantic Ocean. This region is part of the Appalachian Mountain Range. The area has many forests and thousands of lakes and ponds. Province- a political division of land in Canada.

3 Links to the Sea These provinces are often called Maritimes.
Maritime- bordering on or related to the sea. There are hundreds of bays and harbors and most residents live along the coast. This is the smallest region in Canada. It makes up only 5% of the land and 8% of the population.

4 Economic Activities Fishing is the major economic activity in the Atlantic Provinces. Forestry and farming are also important. Prince Edward Island is especially good for farming due to a milder climate and good soil. Tourism and offshore oil drilling are growing in importance in these provinces.

5 The Great Lakes and St. Lawrence Provinces
Quebec Ontario These two provinces make up the core of Canada’s population and economic activities. There are three distinct landscapes in these two provinces: The Canadian Shield- it has poor soil and a cold climate, but rich mineral deposits. Hudson Bay Lowlands- this is a flat, sparsely populated, and swampy region. St. Lawrence Lowlands- it has rich soil and a mid climate. 60% of Canada’s population lives in this region.

6 Characteristics of Ontario
The St. Lawrence Seaway connects the Great Lakes to the Atlantic Ocean through the St. Lawrence River. The difference in elevation between the lakes requires a series of locks. Lock- an enclosed area on a canal that raises or lowers ships from one water level to another. Ontario also has rich soil and abundant mineral resources. Toronto, Ontario’s capital, is Canada’s largest metropolitan area. One third of Canada’s companies are headquartered there and it is Canada’s banking and financial center. Ottawa, Canada’s national capital, is located in southeastern Ontario.

7 Characteristics of Quebec
Most people in Quebec live in cities along the St. Lawrence River Valley. Few people live in the Canadian Shield which is mostly exposed bedrock. Bedrock- a solid rock that is usually covered by soil, gravel, and sand. Most of the Canadian Shield has remained a wilderness of forests, rivers, lakes, and streams. The northernmost part of Quebec is a treeless tundra. Mining, forestry, farming, manufacturing, and service jobs are major economic activities in Quebec. Quebec’s largest city is Montreal. The capital of Quebec Province is Quebec City, the oldest city in Canada, founded in 1608.

8 The Prairie Provinces Alberta Manitoba Saskatchewan
These provinces are located between the Rocky Mountains and the Canadian Shield. They have rolling farmland, prairies, lakes, rivers, and sand dunes.

9 Patterns of Settlement
About half of the people in the Prairie Provinces live in cities. The rest live in rural farming communities. The major cities in this region are located at strategic points along the railroads that were built in the late 1800’s. Winnipeg is farthest east. From Winnipeg two rail lines go west. One rail line goes to Edmonton, the other to Calgary. Both of these cities are in Alberta and are at passes through the Rocky Mountains. Midway between those cities are the cities of Saskatoon and Regina in Saskatchewan, along the same rail lines.

11 British Columbia Nearly all of British Columbia is covered by mountain ranges. 80% of the population lives in or near the city of Vancouver. The economic activities include: salmon fishing, forestry, and mineral excavation. Victoria is the provincial capital. It is located on Vancouver Island. Vancouver is the largest city and the main Pacific port for Canada. The city has a large Asian population and is a major retirement destination for Canadians.

13 A Changing Culture Many residents of the these territories cal themselves Inuit. They live north of the forests, while other native peoples live farther south. Seal hunting is the main economic activity. Today the native people use snowmobiles rather than dogsleds to cross the frozen lands. Modern technology is also used to teach Inuit children using satellites and computers, even though their teachers may be thousands of miles away.

14 A Difficult Environment
The northern territories contain rich deposits of gold, silver, copper, zinc, lead, iron ore, uranium, oil, and natural gas. Most of this wealth remains buried because of the harsh climate and rugged terrain. Some oil is being drilled and transported by pipeline to the south. More drilling and mining may be developed in the future. 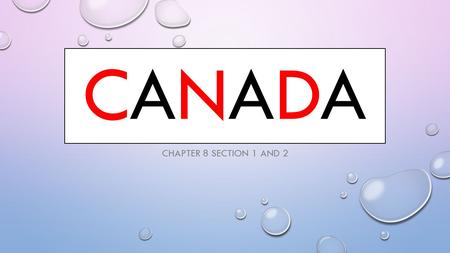