Presentation on theme: "The Water Cycle Water cycles between the oceans, atmosphere and land. All living organisms require water. A. Water enters the atmosphere as water vapor,"— Presentation transcript:

1 The Water Cycle Water cycles between the oceans, atmosphere and land. All living organisms require water. A. Water enters the atmosphere as water vapor, a gas, when water evaporates from the ocean or other bodies of water. Evaporation—the process by which water changes from a liquid to a gas. B. Water can also enter the atmosphere by evaporating from the leaves of plants—Transpiration. C. Precipitation--rain, snow, sleet, or hail a. The sun heats the atmosphere. b. Warm, moist air rises and cools. c. Eventually, the water vapor condenses into tiny droplets that form clouds. d. When the droplets become large enough, the water return to Earth’s surface.

2 D. Run-off—Precipitation runs along the surface of the ground until it enters a river or a stream that carries the run-off back to an ocean or lake. E. Seepage—Rain also seeps into the soil, some of it deeply enough to become ground water. Water in the soil enters plants through the roots, and the water cycle begins anew.

4 The Carbon Cycle 1. Every organic molecule contains the element carbon. A. Carbon and oxygen form carbon dioxide gas (CO2), an important component of the atmosphere. B. Carbon dioxide is taken in by plants during photosynthesis and is given off by plants and animals during cellular respiration.

7 The Nitrogen Cycle 1. All organisms require nitrogen to make amino acids, which in turn are used to build proteins. A. Nitrogen gas makes up 78% of Earth’s atmosphere. B. Nitrogen containing substances such as ammonia (NH3), nitrites (NO2-), and nitrates (NO3-) are found in the wastes produced by many organisms and in dead and decaying organic matter. C. Nitrate is major component of plant fertilizers. 2. Nitrogen gas is the most abundant form but only certain bacteria can use this form. A. Such bacteria live in the soil and on the roots of plants. B. These bacteria convert nitrogen gas into ammonium—nitrogen fixation. C. Other bacteria in the soil convert ammonia into nitrites and nitrates.

8 3. Once the nitrites and nitrates are available, producers (plants) can use them to make proteins. Consumers then eat the producers and reuse the nitrogen to make their own proteins. 4. When organisms die, decomposers return nitrogen to the soil as ammonia. 5. Other soil bacteria convert nitrates into nitrogen gas--denitrification. This process releases nitrogen into the atmosphere once again.

Download ppt "The Water Cycle Water cycles between the oceans, atmosphere and land. All living organisms require water. A. Water enters the atmosphere as water vapor," 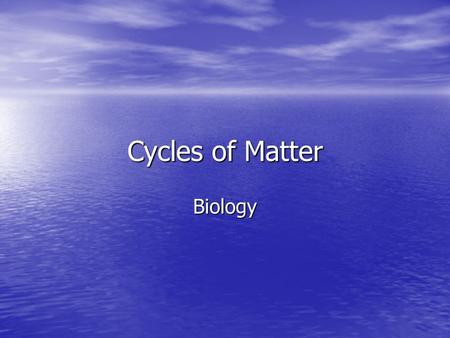